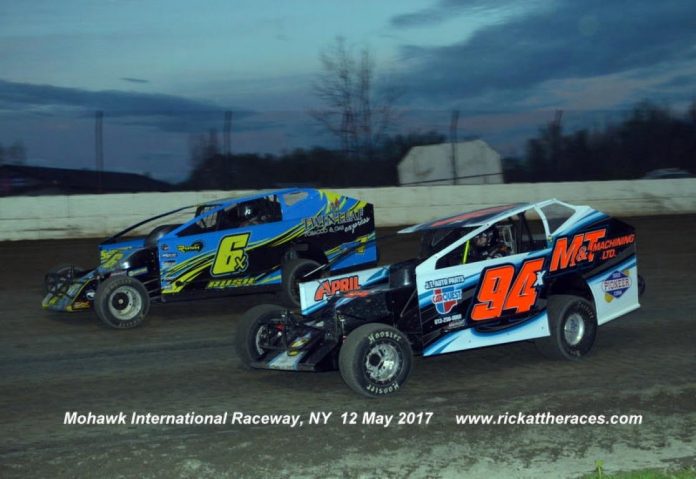 With a solid season opener in the books the 2017 season at Mohawk International Raceway shifts its focus on major events giving drivers a little extra to shoot for this season. Adirondack Auto Parts and Cornwall Flowers will be on hand as the Number One Speed Equipment Sportsman Series is ready to roll for its first of 3 races. The TUSA Mod Lite Series will also be on the card making the first of its 4 appearances on the year.

The TUSA Mod Lite Series always draw big car counts and this coming Friday night should be no different. Tour regular Jeff May won all 3 TUSA Series races in 2016 including a sweep of the Mohawk Nationals in September. Defending track champion Deric Ellsworth will lead the Mohawk regulars after a huge victory this past weekend while Nick Mallette, Harley Brown, Dan Reif and Kevin Foster will also be among the top local drivers and will give the tour invaders all they can handle. The series will return on August 4th with the final 2 events slated for September 15th and 16th.

The Sportsman division saw and incredible photo finish 1 week ago between Robert Delormier and Airborne Park Speedway champion Nick Heywood with Delormier claiming the win by 0.009 seconds. If this is how the Sportsman division is going to be in 2017 fans are in for a treat and with the Number One Speed Equipment Sportsman Series opener set for this Friday night, should provide even more excitement. Defending series champion Louie Jackson Jr. has moved on to the 358 Modified ranks leaving the chance for a new driver to shoot for the top honor. Delormier and Heywood lead the charge but drivers like Joel Hargrave, Zack Arquiett, Brianna Ladouceur and Brent Kelsey will all be ready and looking for victory. 18 events have been run since 2011 and Dylan Evoy leads all drivers with 7 victories while track regulars Robert Delormier and Brianna Ladouceur each have a series triumph. The 2nd leg of the 3 race series will take place on July 28th with the final event coming on the final points night on September 1st.

Reminder to all race fans Canadian Money will be accepted at par at the front gate only this weekend. $15 general admission with a special ladies price of only $7. Gates open at 5pm with the first green flag on the evening dropping at 7:30pm.