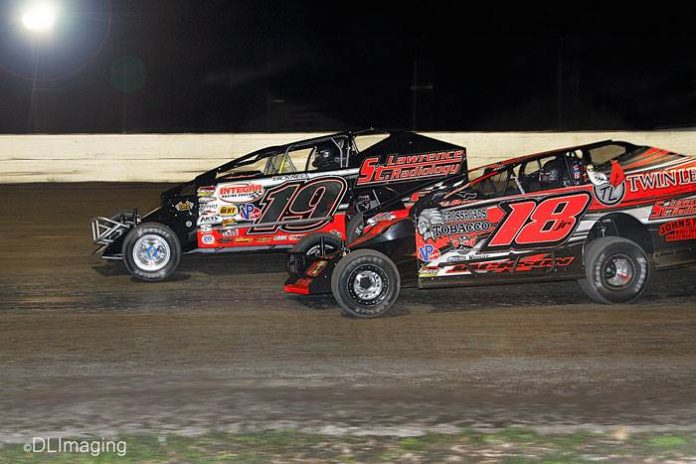 The 35 lap Number 1 Speed Equipment Sportsman Series opener saw a strong 32 car field take to the speedway with pole sitter Jesse Hudson taking the early race lead over Mike Stacey, Johnathon Ferguson, Nick Heywood and Zack Arquiett. As the field completed lap 1 a scary moment occurred on the front stretch as 5 cars tangled sending Gabriel Cyr flipping several times and landing on top on Gilles Godard. All drivers involved were not injured but their cars were done for the night. When the green flew Johnathon Ferguson was able to get by for the lead with Jesse Hudson, Stacey, Heywood, and Brian Hudson completing the top 5. Ferguson was on a rail on this night in his Splash Well Drilling machine but last week’s runner up Nick Heywood was also on the move and searching for the lead. After clearing Mike Stacey for 2nd he still had over a straightaway to make up as Ferguson pulled away at the half way point. Lapped traffic started to come into play in the late stages allowing Nick Heywood to close in and make a run at the leader but without the aid of a caution Heywood had a tough job ahead of him. Johnathon Ferguson worked the traffic perfectly and with clear race track in front of him would march on to his first ever Number 1 Speed Series win and first Sportsman win at Mohawk. Nick Heywood brought his ride home to another runner up finish with Mike Stacey, Ryan Stabler and 4 time Series Champion Dylan Evoy who came from 17th on the grid to complete the top 5.

The TUSA Mod Lite Series was also in town for the first of 4 visits to MIR in 2017. Track regular Kevin Foster and tour regular Jeff May would lead the field of 22 drivers to the green with May taking the top spot. Jeff May won all 3 TUSA Series races in 2016 and had a fast race car once again. On lap 3 May tangled with a slower car sending him spinning in turn 4 and the yellow came out. Paul Klager would inherit the lead over Dan Reif, Tyler Winger, Ryan Halliday and Kevin Foster. Klager clearly had the dominant car and was on cruise control as he pulled away from the field by nearly a straightaway by lap 9. The next yellow came out on lap 10 as Tyler Winger lost control of his machine and nearly made contact with Harley Brown. When the green came back out Klager continued his great run but Jeff May was the story of the night as he rallied to the 3rd after restarting at the back of the field. With 5 laps to go May was able to get by Dan Reif for 2nd but still had a big gap to close in order to catch the leader. In the end Paul Klager had a fast race car and would drive on to his first TUSA win of the year over Jeff May, Nick Mallette, Dan Reif and Brad Reif.

The 358 Modified division saw last week’s winner Tim Fuller take the lead at the drop of the green flag with Jordan McCreadie, Billy Dunn, Chris Raabe and Brian McDonald completing the top 5. Fuller claimed the season opener 1 week ago and was clearly the dominant force as he pulled away while Dunn, McCreadie, Raabe and McDonald did all they could to run down the leader. On lap 12 a scary moment occurred on the front stretch as George Foley broke the front end on his race car. With no way to steer the car he ended up in the path of Ryan Arbuthnot who made heavy contact while running in the 6th spot, the accident also collected 8th place running Danny Johnson as well. All 3 drivers were ok but their cars were heavily damaged. When the racing resumed on lap 13 Billy Dunn made a serious bid for the top spot but Fuller was able to keep the lead with Chris Raabe charging to 3rd over Jordan McCreadie while Carey Terrance rounded out the top 5. With the race going caution free over the final laps Tim Fuller was able to stretch his lead out to nearly a straight away and would march on to his 2nd straight 358 Modified victory with 5 time track champion Billy Dunn claiming his 2nd straight runner up finish. Chris Raabe improved on his opening night disappointment as he finished up 3rd with Jordan McCreadie and Carey Terrance completing the top 5.


The Novice Sportsman 15 lap event saw Thomas Jock III take the lead from the pole over Melvin Rush and Junior Delormier. The driver known as “TJ3” had a fast race car but his night came to a quick end as he made contact with an infield tire at the completion of lap 1 breaking the front suspension on his machine. 1 lap later Kurt Russell would bring out the 2nd caution of the event as he made contact with the turn 4 wall. Once the field started to put laps on the scoreboard Junior Delormier would take command of the race over Melvin Rush, Andy Heywood, Thunder Anderson and Agwalee White. As Delormier started to stretch his lead out by the halfway point Jason McClatchie would bring out the final yellow of the event as he made contact with an infield tire. When the green flew Junior Delormier jumped out in front and would go unchallenged the rest of the way to score his 2nd straight Novice Sportsman victory over Melvin Rush, Thunder Anderson, last week’s runner up Greg Henry while Andy Heywood would complete the top 5.

The ever popular Bandit division was set to go for their 10 lap feature event as heat winner Andrew Fish would grab the lead at the drop of the green, but opening night winner and defending track champion Richard Thorton was on the charge from his 3rd starting spot. Thorton would take over the lead on lap 2 while Lucas Brown and Shane Ray would follow through to 2nd and 3rd. With the race going caution free Richard Thorton was able to put his car on auto pilot and charge to his 2nd straight feature win. Lucas Brown claimed his best ever finish of 2nd while 2015 track champion Shane Ray would round out the top 3.

Next Friday night the crown jewel of the Mohawk International Raceway will be set to take place as the 50 lap Memorial Cup will kick off the first round of the Unique Ecigs 358 Modified Series. Kingston’s Danny O’Brien has won this event 2 of the last 3 years while Billy Dunn will try to defend his series title, but drivers like Tim Fuller, Chris Raabe, Jordan McCreadie and Carey Terrance will all be searching for that coveted trophy. Long time track supporter Frenchie’s Chevrolet and Frenchie’s Ford will be on hand and have a variety of vehicles on display. The first green flag drops at 7:30pm.