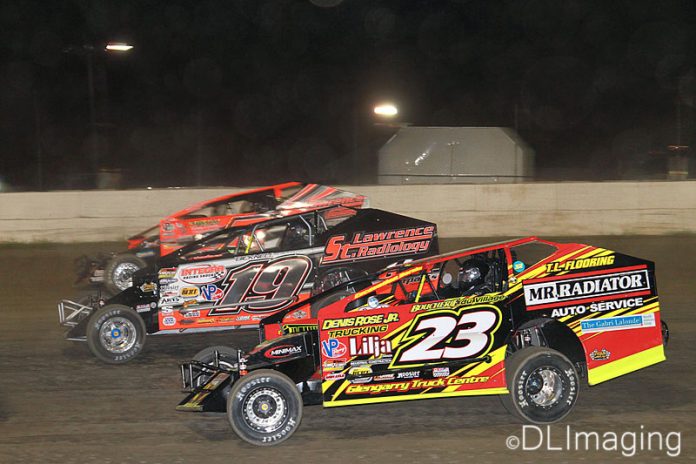 AKWESASNE, NY – Mohawk Network LLC will be on hand this weekend, after a week off the 358 Modifieds are back and drivers like Billy Dunn, Brian McDonald, Chris Raabe, Corey Wheeler, Danny Johnson and Jordan McCreadie are refreshed and ready to make a run at the one driver who has been dominant in 2017.

Tim Fuller made it clear that he was going to be the man to beat this season after taking top honors the first 2 weeks and is the current 358 Modified points leader. 5 time and defending track champion Billy Dunn has been the driver to beat as of late. After back to back runner up finishes to start off the year the Watertown native knows it’s early and has accepted Fuller’s title challenge. Corey Wheeler is the only other driver to win this season and having 1 more week to let that sink in, he has all the momentum on his side and will make a serious bid for 2 in a row this weekend.

The Sportsman division has seen 4 different winners in as many events and last weeks winner Cedric Gauvreau will look for back to back victories afterhis first ever feature win over Gabriel Cyr. Drivers Like Johnathon Ferguson, Brianna Ladouceur, Zack Arquiett and many others will all be on their game this Friday night. With a field of nearly 30 cars every week, the opportunity for another first time winner is out therebut all questions will be answered this weekend.

The Mod Lite division has the night off and drivers will be searching for ways to beat defending track champion Deric Ellsworth who has 3 wins in the first 4 races. Taking the place of the Mod Lite division will be the ever popular Eastern Ontario Vintage Stock Car Club. Cory Winters took the big win in dominant fashion 2 weeks ago in Cornwall and will look to keep the momentum going as the series rolls into Mohawk.

Agwalee White will look to keep things going in Novice Sportsman as the 15 year old took his first ever win but will have a stout field who will try to deny him 2 in a row. Richard Thorton will also be on hand and looking to keep his dominance going in the Bandit class, as he searches for his 3rd win in a row and 4th on the season.

Gates open at 5:00pm just $12 general admission with Canadian Money also taken at par at the main gate for the entire month of June, Seniors and students $10, children are always admitted free. Pit admission is $27 with a DirtCar membership $30 for non members. The first green flag flies at 7:30pm. For more information log on to www.mohawkspeedway.com or contact the speedway office at 1-518-358-9017.