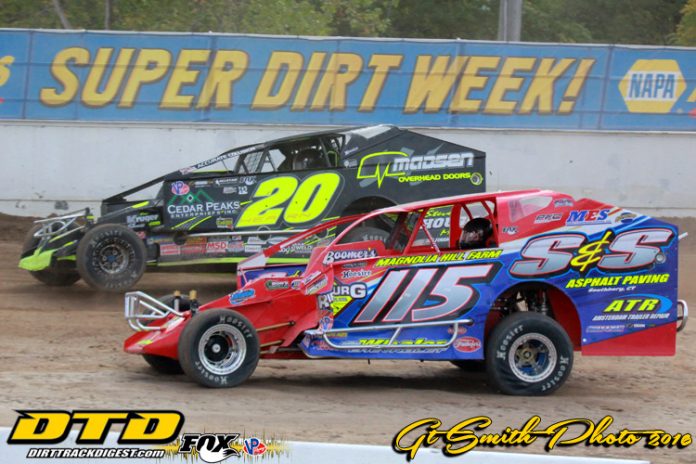 CONCORD, NC – From 1972 to 2015, NAPA Auto Parts Super DIRT Week called the New York State Fairgrounds home. Originally intended as an end-of-year blowout, the event quickly turned into “Racing’s Biggest Party”. Fans from all over the United States and Canada made their annual pilgrimage to the Moody Mile with their campers in tow for the Northeast’s biggest dirt racing event.

The closing of the New York State Fairgrounds also closed the Moody Mile chapter of NAPA Super DIRT Week. In 2016, roughly 30-miles away from the original location, a new chapter began.

Desirable fall temperatures paired with beautiful Upstate New York scenery set the stage for the migration from Syracuse to the historic Oswego Speedway. The fan base ranged from diehard dirt racing fanatics to Oswego Speedway’s weekly warriors. As fans laid eyes on the Clay Palace, many were brought back to 1951, the last time the Speedway was covered in dirt.

Traveling back in time 66 years, on the outskirts of the City of Oswego sat a horse track called Wine Creek. In 1951 Harry, George and Bill Caruso decided to purchase the horse track and turn it into a personal test track to practice in the stock car they raced in Sandy Creek and Vernon, NY.

After one year of reconstruction of the horse track, their vision changed and morphed into a full-blown speedway with seating for nearly 1,000 spectators. And just like that, Oswego Speedway was born.


On August 10, 1951 the Speedway opened its gates as a 3/8th-mile dirt oval racing facility. Charlie Barry of Solvay, NY was the first driver to ever claim the checkers at Oswego Speedway. That night’s runner-up was the patriarch of the current owners of Oswego Speedway, Johnny Torresse Sr.

After running the facility as a dirt track for a half dozen events in 1951, the Speedway closed its doors in June of 1952 to undergo yet another change. Four events took place on dirt in 1952, but the surface produced heavy dust and rocks, which propelled the transformation to its current state: asphalt.

While the venue of NAPA Super DIRT Week may have changed, many things that have stayed the same. Over the course of the 45 years a variety of cars have hit the track, and this year will be no different. Featured divisions will include Pro Stocks, Sportsman Modifieds, 358 Modifieds and the Big-Block Modifieds.

Another thing that continues to makes NAPA Super DIRT Week so special is the satellite events that take place at the surrounding area race tracks. It’s not uncommon to see seemingly abandoned campsites during the evening as race fans venture away to take in more racing – eventually returning to their temporary home at Super DIRT Week. The party continues this year with events at Utica-Rome Speedway, Weedsport Speedway, Brewerton Speedway and Fulton Speedway.

The competition at NAPA Super DIRT Week continues to grow as last year cars went two, three and four-wide throughout the field on the 5/8th-mile oval- all vying to be crowned champion of Super DIRT Week. At the end of the day, Stewart Friesen once again stood tall in Victory Lane after capturing his fifth NAPA Super DIRT Week title and his third Victory in a row.

From now until move-in day – as early as Sunday, October 1st – DIRTcar Racing fans will be preparing for their annual October trip to reminisce on old memories and create new ones.

To stay up to date on the latest news and information about NAPA Auto Parts Super DIRT Week, like us on Facebook at www.facebook.com/DIRTcar or follow us on Twitter @SuperDIRTWeek or @DIRTcar_Racing For tickets and information, call 844-DIRT-TIX (844-347-8849) or go to www.SuperDIRTWeekOnline.com