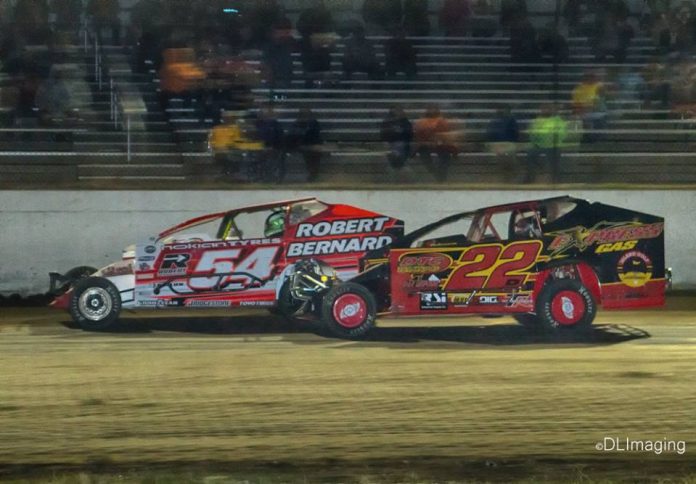 AKWESASNE, NY – The much anticipated Mohawk Nationals kicked off in fine style Friday night at the Mohawk International Raceway with great weather, a great crowd and some of the best drivers to strap into a race car. Steve Bernard passed Danny Johnson on lap 68 then held off Billy Dunn to record the DirtCar 358 Modified Series win, Mike White led every lap and also held off a determined Roch Aubin and Bruno Cyr for his first ever DirtCar Pro Stock Series win, Guillaume Neiderer was dominant claiming the Lightning Sprint feature while Paul Klager led wire to wire in TUSA Mod Lite Series 25 lap contest.

Tyler Givogue who was making his 358 Modified debut led the field to green but it was Chris Raabe taking away the early over Givogue, Michael Parent, Mathieu Desjardins and Erick Rudolph. Raabe had a strong car in the opening 8 laps before a left rear flat tire forced the defending series champion to the pits handing the lead to Givogue on the next restart. When the green flew Givogue tried to hold the lead but Michael Parent took command of the field with Rudolph and Givogue completing the top 3. The caution flew again on lap 13 as Ryan Arbuthnot spun his car in turn 3 but was able to continue. On the restart it was a classic battle between a pair of 25s as Michael Parent in the 25P and the 25R of Rudolph were having a great battle for the top spot as they raced side by side for the next 10 laps as Mathieu Desjardins, Danny Johnson and Tyler Givogue completed the top 5. On lap 35 Erick Rudolph finally was able to get the advantage as he cleared Parent on lap 35 bringing Johnson with him to 2nd. On lap 36 Michael Parent’s shot at a win went away as he blew a left rear tire and the caution flew again. On the restart Danny Johnson took over the top spot but behind them Brian McDonald was making a big charge coming from 6th to 4th as he battled with Steve Bernier for the number 3 spot. On lap 47 McDonald saw a chance at victory go away as he tangled with Bernier forcing the McDonald into the wall. When the field went back under green The Doctor continued his great run and was looking to head to another 358 Series win with Rudolph and now Steve Bernard charging into the picture as he completed the top 3. On lap 68 the final yellow flew as Michael Parent would break the front end on his car ending his night for good. On the restart Steve Bernard went right to work as he drove by Johnson on the top side of turn 4 for the lead bringing Billy Dunn to 2nd and the battle was on. Dunn gave it every effort he could but Steve Bernard remained strong in the top spot. Over the final laps Steve Bernard finally put it all together as he closed the deal claiming his 4th career DirtCar 358 Modified series win and first at Mohawk. Dunn would cross in 2nd followed by Danny Johnson, Steve Bernier and Erick Rudolph.

The DirtCar Pro Stock Series first made a visit in 2000 at Mohawk and were back again in 2017 with 30 drivers set to take the green flag. Mike White would charge out to the early lead at the start of the 35 lap affair with Marc Lalonde, Dave Seguin, CD Beauchamp and Stephane Lebrun giving chase. White who competed for many seasons in Street Stock events at the speedway, did not miss a beat as he pulled out to a commanding lead leaving Marc Lalonde to battle with fellow Cornwall regular Dave Seguin for 2nd and 3rd. On lap 8 the first of several yellow flags flew as Pascal Payeur slowed in turn 2. On the restart Mike White held the lead once again with defending series Champion Jocelyn Roy moving to 2nd while Airborne Park Speedway winner CD Beauchamp completed the top 3 as the quickly closed in on the leader. On lap 22 Beauchamp saw a shot at victory go away as he slowed in turn 2. After several yellow flags Mike White was still the race leader and showed no signs of letting up but Bruno Cyr and Roch Aubin were making their way forward and tried at will to take the lead away. Over the remaining laps these 3 drivers put on a fantastic show for the fans as they battled hard but White remained in control. On the final lap Bruno Cyr made a move taking 2nd away and tried to take the lead from White. Heading into turn 3 Mike White would get the bite he was looking for as he shot off turn 4 and held on to score his first ever DirtCar Pro Stock Series win. Roch Aubin outran Bruno Cyr for 2nd with Nick Stone charging from 26th on the grid to finish 4th while Dave Seguin completed the top 5. Current series points leader Rob Yetman had a rough night spinning at the halfway point of the event. He would charge back for a 9th place finish.

In the TUSA Mod Lite Series Paul Klager would take advantage of his pole starting spot to grab the lead over Jeff May, Jeff Sykes, Brad Reif and Track Champion Nick Mallette. Klager had the dominant car as he drove away from a quality field in the opening laps while behind him May and Sykes battled hard for 2nd with 2016 Mod Lite track champion Deric Ellsworth making a charge to the front as well. Klager was firmly in control until lap 22 when a tangle in turn 3 involving Ellsworth and Sykes forced the former Modified Champion nearly upside down in turn 3 and the caution was out. When the green flew for the final time Paul Klager was no to be denied as he marched on to score his 2nd TUSA Series win at Mohawk in 2017. Deric Ellsworth edged out Jeff May for 2nd at the line with track champion Nick Mallette crossing 4th and Brad Reif taking the number 5 position.


In Quebec Lightning Sprint action Stephane St. Laurent was running strong at the start of the 20 lap feature event over Guillaume Neiderer and Eric Sundborg. These 3 drivers pulled away from a stout field and put on a fantastic battle for the lead with St. Laurent remaining in front but the race was far from over. At the halfway point Stephane St. Laurent held the top spot but things were about to take an unfortunate turn. On lap 15 coming to the line the motor started to go south on the leader as he shut it down heading into turn 1 and ending a great shot at the win and the caution flag flew. When the field went back green Guillaume Neider took over the lead and checked out to score the win with Eric Sundborg crossing in 2nd while Xavier Lauzon made a big move coming from 5th spot to round out the top 3.

Day number 2 is ready to go as the Big Block Modified Super DirtCar Series will be back in action along with the 4th annual Pete Mitchell Memorial for the DirtCar North Regional Sportsman series. The TUSA Mod Lites are back for the 2nd straight day along with the Eastern Ontario Vintage Stock Car Club. Gates open at 2pm with racing action beginning at 4:30pm.