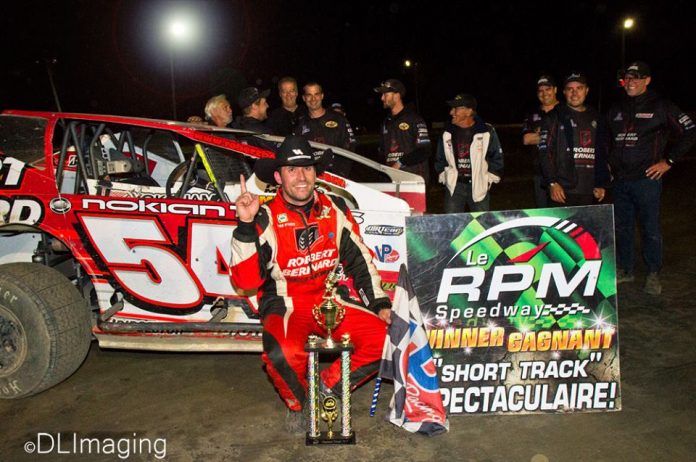 (translated) Dirt finals and series have blown away the spectators to the RPM Speedway of Saint-Marcel-de-Richelieu this September 22. The temperature was more in the summer until early autumn.

The 1 K Robert Delormier will not be disturbed by anyone in this race that he will lead from start to finish. Is Dany won #90 and Martin Pelletier #92 who will steal the show of the tour 13 to the end for the 2nd place wins won. We’ll find them often to squabbling among the laggards. In the round 13, Pelletier exceeds 23 Mike Stacey from the outside for the 3rd. We then have the Alex Lajoie 33 in 5th place. He will fight with Stacey at the bottom and at the top until the end of the test. Bryan Cloutier #93 exceeds the 33 for 5th place at 3 laps from the end. The next round, Cloutier made outside of Stacey for 4th place. Lajoie enters the last lap to finish in front of Stacey. Antoine Parent #63 (former #17 in STR) deserves a special mention for his first victory in qualifying at Saint-Marcel to his initial performance on our lead in this category.

Mini-mod 20 laps
4 Pascal Bissonnette dominates until round 18 where it slows down then turns around. Jonathan Lapolice #7 exceeds his brother of Patrick #68 on the second revival of turn 3 on the inside for the 2nd place. 2 of Nikos Halikas takes advantage of the same opportunity also to the bottom of Patrick for the 3rd place. Francis Daigneault #77 hand first, back a few positions to be in position 6 to the 6th passage. Out of the 4, he will win a place as the other top 4.

Mathieu Desjardins #1 M led 72 laps of the event then occurs outside the 54 Steve Bernard, who takes the lead. The 54 never left this position until the completion of the final. The ONE of David Hébert advantage 14th manages third by the coast of the 01 Chris Raabe turn 73. Raabe was 2nd the first round until the 42nd where Bernard passed him. 25 laps from the end so we have Bernard, Desjardins, Hébert, Raabe and Dominic Dufault #63. But on the restart of lap 77, this last is rugged and 31 of Lance Willix, leader before tonight in the series 358 takes also the path of the wells. If Dufault comes back, this isn’t the case of Willix. Mario Clair # 22 c becomes 5th, but on the restart, Steve Bernier #1* la takes him from the outside. To restart the round 82, Bernier is placed in front of Desjardins who shows his dissatisfaction with this decision to the Tower of signallers. The positions will remain so except for Raabe and clear which will share the 5 position, but clear will be the top.

STR 20 laps
This finish is the case of Sabrina Blanchette that will lead entieerement. Pierre Hébert #1 will launch first in pursuit. In the 11th round, 96 Patrick Laguë made Hébert inside for the 2nd. Hébert him take it back on the next restart. The 42 of Carl Labonté also took the opportunity to exceed Laguë from above. This same resumption of the round 11, the 63M of manual Messier coming 5th in the Éric Giguère 79. Positions freeze since then.

Elliott Gamache #20 directs all final with after Bryan #51 and Claudie Lizotte #39 Préville. The movement will be behind them. The 49 of Alan Carrier will first 4th, then the 35 William root exceed it by outside after several tries at 4 laps from the end, but cannot complete his maneuver that he comes out of the track losing 2 positions. Jeff Beaumier #2 benefit to finish 5th.

Donovan Lussier #00 will dominate all 25 laps. First will be more close to pursuing the #01 X of Jacob Nault. An accident at the revival of the round 6 will see the latter back to the benefit of the 39A of Alexandre Lizotte which becomes 2nd. 91 Félix Roy exceeds the following recovery Lizotte for second place. In the round of 16, Roy is fired. the 39A regains his place behind Lussier. To restart the round 17, Keven Letendre throws 2nd before Lizotte. Christopher Cormier #95 part of the pileup of round 6 is 5th after 2 reminders of the same tour. Cormier will follow therefore 3 Letendre. However Cormier will not exceed Lizotte. Stéphane Nault #01 becomes 5th with Roy stall in the round of 16.