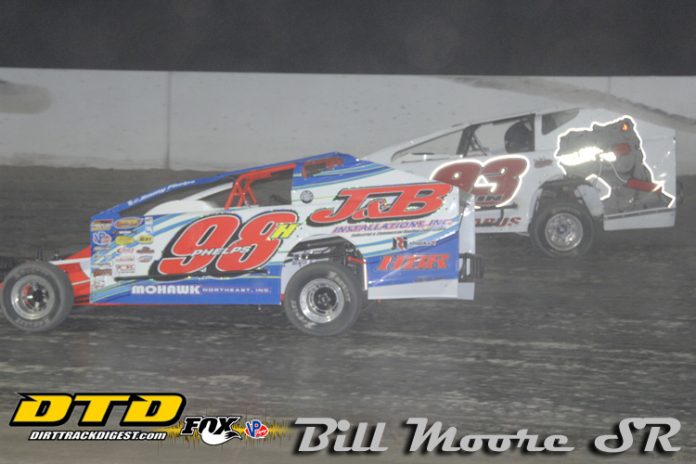 With 11 race dates ranging from Sunday, May 20 to Wednesday, October 3; a blockbuster weekend set for the middle of July is likely to catch the eye of eager race fans.

The World of Outlaws Sprint Car Series, Super DIRTcar Series Big Block Modifieds, and DIRTcar Sportsman will join together at Weedsport on July 28-29 for a two day show that will no doubt set the tone for an exciting summer of action.

The annual Hall of Fame 100 for the Super DIRTcar Series Big Blocks will launch the weekend on Saturday, July 28 while the World of Outlaws Sprint Cars will keep fans on the edge of their seats as they highlight the Sunday, July 29 Empire State Challenge program along with the DIRTcar Sportsman.

“We have been wanting to put together a mid-summer show stopping event at Weedsport for a while now, and I think we have hit the mark with this weekend lineup,” said Weedsport Speedway promoter, Jimmy Phelps. “It will no doubt be a memorable weekend with two of the best dirt racing series in the country here in Weedsport. We hope our fans join us for the duration.”


More information on this can’t miss special event will be provided at www.weedsportspeedway.com in the coming weeks.
Weedsport Speedway will first see cars on track during its test and tune session set for Sunday, May 6, which will be open to all divisions.

The first competitive laps on the 3/8-mile will take place during opening night on Sunday, May 20 featuring the Icebreaker 50 for DIRTcar Big Block Modifieds. The DIRTcar Sportsman and 600cc Micro Sprints will join the night’s action.

The Modified opener at Weedsport serves as a warmup for the first of three visits by the Super DIRTcar Series Big Blocks on Monday, May 28, as they compete in the Memorial Day 100 along with Sportsman.

The month of June will be Sprintacular as Tony Stewart’s All-Star Circuit of Champions will take on The Port on Sunday, June 10 followed by a historic first visit by the USAC National Sprint Cars on Tuesday, June 19.

The ASCoC show on June 10 will be paired with yet another Big Block Modified event while the Sportsman and a 600cc Micro Sprint Invitational A-Main will join the USAC Sprinters on June 19.

A star-studded month of July opens with the crown jewel Sportsman Classic 75 for the DIRTcar Sportsman Tour on Tuesday, July 3 paired with the Rush Late Models and 600cc Micros.

The first ever visit by the American Flat Track motorcycle series on Saturday, July 7 keeps the momentum rolling before the aforementioned July 28-29 mid-summer weekend for the Super DIRTcar Series, World of Outlaws Sprints, and Sportsman.

The month of August features the always popular Empire Super Sprints for their ESS Legends Reunion, along with Sportsman on Sunday, August 12.

Labor Day Weekend will once again provide the Labor Day Double Play with the Super DIRTcar Series Big Blocks and the ESS Sprints, along with the return of the DIRTcar Pro Stock Series.

Then, the racing season on the 3/8-mile will draw to a conclusion with the Super DIRT Week Kickoff Party on Wednesday, October 3 joining the DIRTcar 358 Modified Tour and the DIRTcar Sportsman Tour.

“We’re very proud to have put together a special event calendar that features the best of the best in multiple forms of motorsport,” said Phelps. “We have 410 and 360 sprint cars of multiple varieties, the best in Modified and Sportsman racing, full fender action with Late Models and Pro Stocks, lightning fast micros, even motorcycles. We’re constantly working to please our fans and make Weedsport Speedway the hub of all types of motorsports, and we will keep working to make that happen.”

New for the 2018 season, Weedsport Speedway will implement a “No Smoking” policy for the grandstands. Smoking will be permitted in designated areas in the midway.

About Weedsport Speedway: Purchased in 2013 by Al Heinke, Weedsport Speedway has returned to a real racers track, providing a complete venue for racers, their families and friends, and for the fans looking for motorsports entertainment. Officially opened for the first time on July 24, 1955 – the Weedsport Speedway 3/8 mile dirt oval has produced a legendary list of drivers and champions including Will Cagle, Danny Johnson, Bob McCreadie, Alan Johnson, Jack Johnson, and Dave Lape to name a few. Today the facility welcomes the best of the best in dirt short track racing from the Craftsman World of Outlaws Sprint Car Series and the USAC National Sprint Cars, to the Super DIRTcar Series Big Block Modifieds along with the DIRTcar 358-Modifieds, Sportsman, Pro Stocks, and more. While racing entertainment is the focal point, Weedsport Speedway has gone the extra mile in welcoming Weedsport Productions, which brings the facility full circle with a dedicated digital entertainment team for web, television, and on site screen usage.
2018 Weedsport Speedway Schedule of Events: