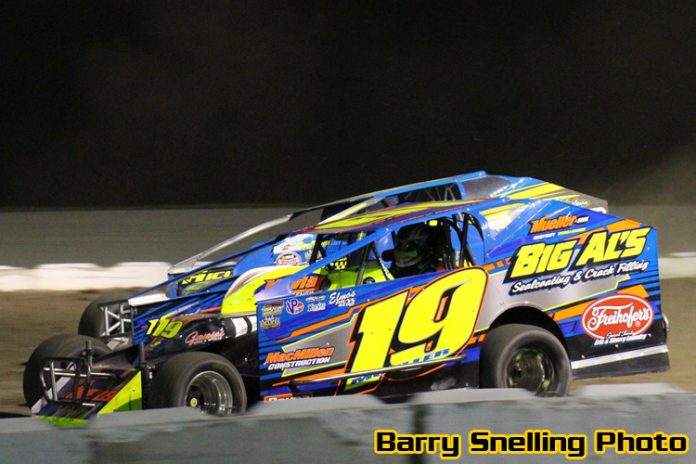 WEST HAVEN, VT – The ground-pounding Small Block “358” Modifieds are coming back to Devil’s Bowl Speedway. The Vermont facility returns to full-time dirt track stock car racing on a lightning-fast half-mile surface in 2018, and the new era of racing includes a four-event mini-series championship for the famed 358 Modifieds.

Two of the four race dates will be co-sanctioned by the King of Dirt Racing Series (KOD), while the other two dates will be independently run by Devil’s Bowl Speedway management.

A-Verdi Storage Containers returns to present the KOD Small Blocks with a special mid-week show on Wednesday, June 6. Serving Vermont and Upstate New York, A-Verdi is family-owned-and-operated and has been a major motorsports supporter throughout its 37 years, including Devil’s Bowl Speedway.

Devil’s Bowl and A-Verdi hosted the first race in the history of the KOD Small Block 358 Modified tour last year. Former Devil’s Bowl standouts Marc Johnson and Jessey Mueller finished 1-2 in the race – which was held on the former infield short track – and later finished 1-2 in KOD Small Block championship standings. Allison Ricci finished third in the event, and she is expected to return with Johnson and Mueller on the new half-mile.

The second 358 Modified event will be an independent show on Sunday, July 15, with a “Twin 20” format. A pair of 20-lap sprint races will each carry full championship points and a “split purse” in which each race pays $750 to win and $100 to start, guaranteeing each driver a minimum of $200 for 40 laps’ worth of work.

The King of Dirt Series returns on Sunday, July 29, with the seventh annual “C.J. Richards Memorial” event, which will be 67 laps in honor of Devil’s Bowl founder Richards opening the facility in 1967. The mini-series championship wraps up on Labor Day weekend on Sunday, September 2, with a 30-lap race paying $1,250 to win.