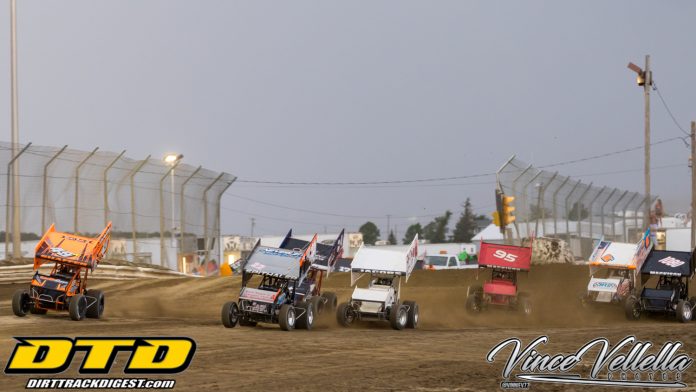 BROWNSBURG, IN – The Arctic Cat All Star Circuit of Champions presented by Mobil 1 will end the month of May with an action-packed tripleheader in the Buckeye State, set to invade Attica Raceway Park, Wayne County Speedway, and Waynesfield Raceway Park on Friday through Sunday, May 25-27, respectively.

With wet weather interfering with recent action in Wisconsin, Tony Stewart’s All Stars look forward to wrapping up the month of May with a trio of $5,000-to-win main events, a perfect transition into their June schedule that includes 16 programs across five states.

Attica Raceway Park and Wayne County Speedway each have hosted the All Star Circuit of Champions on one occasion thus far in 2018. Occurring on back-to-back evenings, Tony Stewart’s All Stars invaded the Attica highbanks for the Core & Main Spring Nationals on Friday, April 20, followed by a stop at Wayne County Speedway on Saturday, April 21. A pair of names certainly synonymous with sprint car competition earned the $5,000 victories; the “Wild Child” Jac Haudenschild earned the top prize at Attica, followed by an impressive performance by the “Steel City Outlaw” Tim Shaffer at Wayne County. Shaffer owns two All Star victories on the season.

Waynesfield Raceway Park, arguably one of the most competitive ovals on the circuit, will host the traveling All Stars for the first time of 2018 during the upcoming holiday weekend, honoring Hall of Fame car owner and engine builder, Bob Hampshire, with the Bob Hampshire Classic on Sunday, May 27. The open wheel doubleheader, with the All Stars sharing the evening stage with the NRA Sprint Invaders, will not only feature all of Tony Stewart’s All Stars, but also a handful of outside of invaders including rising NASCAR star, Christopher Bell, who will do double-duty during the Bob Hampshire Classic program.

Entering the weekend as the most recent All Star main event winner (Sharon Speedway on May 5), Clute, Texas’ Aaron Reutzel will lead the All Star charge into Attica Raceway Park on Friday evening, now on top of the Series driver standings by ten markers over Attica Spring Nationals winner, Jac Haudenschild. The pilot of the Baughman-Reutzel Motorsports No. 87 entry owns four top-ten finishes in five point-earning starts so far this season, two of which occurring inside the top-five.


Kokomo, Indiana’s Parker Price-Miller will enter the Ohio triple third in the All Star driver championship chase, trailing the top spot by a mere-30 points. Six-time and defending All Star champion, Chad Kemenah, will enter the weekend fourth in the driver standings, followed by the “Buckeye Bullet” Dave Blaney.

Waynesfield Raceway Park will open pit gates at 4 p.m. on Sunday, May 27. Main gates will open at 5 p.m., followed by hot laps at 6 p.m. Racing is scheduled to hit the speedway at 7 p.m., sharp. Additional news and notes can be found on the Web at www.waynesfieldmotorsportspark.com.