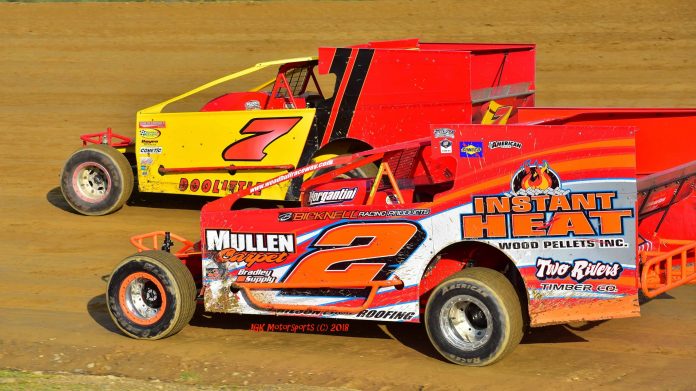 BATAVIA, NY – Despite being in the center of modified country, the Genesee Speedway has always had a different heartbeat when it comes to dirt track racing. This Thursday, however, the ground-pounding behemoths will invade Batavia for a highly-anticipated appearance.

This Thursday, August 16, Big Block and Small Block Modifieds will collide at the Genesee Speedway in the 40-lap, $2,000-to-win Gladiator, presented by Wraptile Graphics and Professional Drainage Systems. Utilizing Woodhull Raceway and Super Series rules, along with an open draw/redraw format, this event has shown great appeal to drivers from every direction and all levels of success in the modified world. Race teams will be able to use Hoosier or American Racer Tires that meet specifications on the website, along with sail panels to keep the speed up around the 1/3-mile oval. Point leaders more a multitude of racetracks are expected, but who will take home the unique gladiator trophy remains to be seen.

Not only will the modifieds be in competition, but so too will the Sportsman. This division was added a month ago and thus will not be running for points in this special show. Matt Steffenhagen was the breakthrough winner on Saturday Night and became the 7th different sportsman competitor to reach Victory Lane in 2018. Will an eighth win on Thursday?

The Street Stocks will run their third race of the mid-week mini-series. After two races, a log jam has occurred at the top of the standings, with Josh Pangrazio and Glenn Whritenour tied for first, with Byron Dewitt and Kurt Stebbins both just one point back of the duo. Pangrazio has won three of the last four races at Genesee, including the last Thursday event.

The Mini Stocks have a tight point race coming down the stretch. Defending champion Dante Mancuso is just five points up on Cole Susice. Things are just a little bit more spaced out in the bandit division, who will also be in competition. Point Leader Bailey Logsdon now has six wins this season and has a 29 point advantage over Jessica Traxler.

The Thursday event will see heat races start at 7:00 P.M. Adult tickets are just $13. Keep in mind that with a race this Thursday, there will be no racing at Genesee on Saturday Night. For more information, visit www.Genesee-Speedway.com.