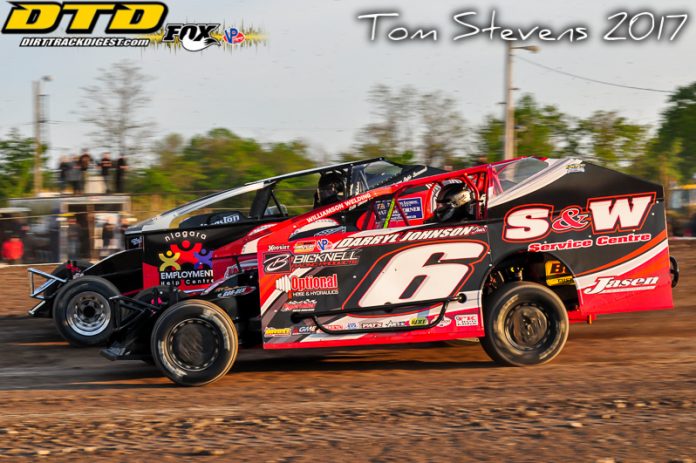 BRIGHTON, ONT – The 51st season at Brighton Speedway has sped by faster than the competition on the track. Although only one weekend of dirt racing remains on the schedule it certainly is a case of ‘saving the best for last’. Cool 100 presents the 14th Annual Applefest Shootout Weekend along with Lucas Oil Products, Coca-Cola, VP Fuels and Image Factor Media. The action packed two-night program runs Friday, September 21st and Saturday, September 22nd.

The excitement begins on Friday night at 7:00 PM as the DIRTcar Sportsman Series will compete in their first night of back to back series events. Friday will also feature the first of two nights for the Northeast Late Model Alliance as well as a special Comp 4 / Mini Stocks event. Thunder Stocks will get a warm up for their Saturday night 50 lap event and Friday will mark the second visit of the season by the Eastern Ontario Vintage Stock Car Club.

An exciting ALL NEW format is on tap for Saturday. New this year heats and time trials will begin at 3:00 PM in the afternoon. After all the heats are complete the speedway will take a short break for track rework as well as redraws for all five divisions will take place in the court yard at 6:00 PM. Then at 7:00 PM the real action that will include 235 Feature laps will take to the track! “This new format will allow us to run through the races at a reasonable pace well taking the appropriate time to celebrate the great event that this is. In the past we have had to rush through the events and haven’t event been able to have proper victory lane ceremonies due to time constraints and this will not be an issue with the new start time” states track promoter Mark Rinaldi.

Saturday will feature the return of the DIRTcar 358 Modifieds as they compete in the $5,000 to win, 75 lap Applefest Shootout. The Northeast Late Model Alliance will return for the 50 lap Great Crate Race. The winner of that event will walk away with $4,000. Saturday will also include three $1,000 to win races as DIRTcar Sportsman Series will return along with the finale for the Insta Insulation Duel on the Dirt Thunder Stock Series and the Canadian Modified/UMP Modified Showdown.


Brent Begolo and Johnathan Ferguson picked up their first Applefest basket of apples in 2017 winning on Friday and Saturday night respectively. Combined there have been eleven different drivers that have won the DIRTcar Sportsman part of the event. Cody McPherson (2012, 2016) and Gary Lindberg (2014, 2015) are the only two drivers to have won twice. In addition to the 2017 winners, six different drivers including Martin Pelletier (2016), Shane Pecore (2013), Chris Herbison (2010), Nic Cupolo (2009), James Michael Friesen (2008) and Mark D’Ilario (2007) also have a single win in the Sportsman race at Applefest.

The Great Crate Race has seen four different winners over the first six editions of the race. Charlie Sanderock is the most recent winner and has managed to claim the checkers three years in a row (2015, 2016, 2017) and has not lost yet this season in the combined NLMA events picking up the most recent win back in August at the Cornwall Motor speedway. Dale Caswell of West Monroe, NY is the only other repeat winner with back-to-back wins in 2013 and 2014 and will be on hand to try and de-throne Sandercock in the 2018 running of the event. Lee Gill of Lafargeville, NY won the inaugural race in 2011 while Chuck Meyers claimed the victory in 2012.

IMG 2514 2017 winner Mat Williamson took home the prize in the 75 Lap DIRTcar 358 Modified Division and is set to return this weekend to try it all again.

About Cool 100: Cool 100 is Today’s Best Country Music Radio and the #1 Country Station in Eastern Ontario, Belleville and the Quinte Region for Country Western and New Country Hits. Listen live at 100.1FM or online at www.cool100.ca.

About Coca-Cola: Coca-Cola® was invented by Atlanta pharmacist, John Smith Pemberton in 1886. Since that time, The Coca-Cola Company has grown to represent over 400 different brands in 200 countries. Coca-Cola® beverages have been sold and distributed in Canada for more than one hundred years. In 1906, the first Canadian-made Coca-Cola® bottles came off the production line at 65 Bellwoods Avenue in Toronto. Brighton Speedway is proud to offer Coca-Cola products on race days. For more information, visit www.coca-cola.ca.

About Hoosier Racing Tire: Established in the 1950s, Hoosier Racing Tire is the largest race tire manufacturer in the world. Hoosier has grown to produce over 1000 different types of race tires. The company has its own 300-mph test wheel; a technology center; state-of-the-art, fully-integrated production facilities recently adding a high-tech mixing plant, with enough capacity to produce not only for Hoosier Racing Tire, but to have the ability to produce rubber for additional entities as well as a model sales and distribution network. Visit www.hoosiertire.ca for more information.

About Image Factor Media: Image Factor Media offers a number of graphic design services to race teams, speedways and motorsport sponsors. By making your image a factor you will show fans and sponsors that you mean business. Whether its apparel, websites, autograph cards, flyers, poster, event tickets or sponsorship proposals Image Factor Media can provide the services and products needed for every budget. Explore your options at www.imagefactormedia.com.

About Lucas Oil: Lucas has been involved in the Canadian motorsports industry since 1999. They are a proud sponsor of many racers and racing events across the country. As sales in Canada increase, so does Lucas Oil’s commitment to motorsport sponsorship and community events. Lucas Oil remains committed to producing only the highest quality premium automotive, heavy duty, industrial and specialty oil products. For more information, visit Lucas Oil online at www.lucasoil.ca.

About VP Racing Fuels: VP is recognized by many as the world leader in race fuel technology, with a catalog of nearly 70 fuel blends and a growing roster of VP-fueled champions across the entire spectrum of motorsports. VP’s reputation for product quality, along with superior service and technical support, helped secure its position as the Official Racing Fuel of the largest racing sanctioning body in the world–NHRA Championship Drag Racing. VP is also a sponsor of nearly 60 other series and sanctioning bodies, including World of Outlaws Sprint Cars and World of Outlaws Late Models among many others. Find out more at www.vpracingfuels.com.

About the Eastern Ontario Vintage Stock Car Club: The Eastern Ontario Vintage Stock Car Club (EOVSCC) is a travelling series of open-wheel modifieds styled as 1950s, 60s, 70s, and 80s stock cars. The EOVSCC was formed with the intent of providing a safe, affordable and competitive racing platform to honour and showcase the historical roots of dirt stock car racing in Ontario. The club offers a very exciting and unique brand of Dirt Modified Racing throughout Eastern Ontario and Northern New York State. For more information, visit www.easternontariovintage.com.