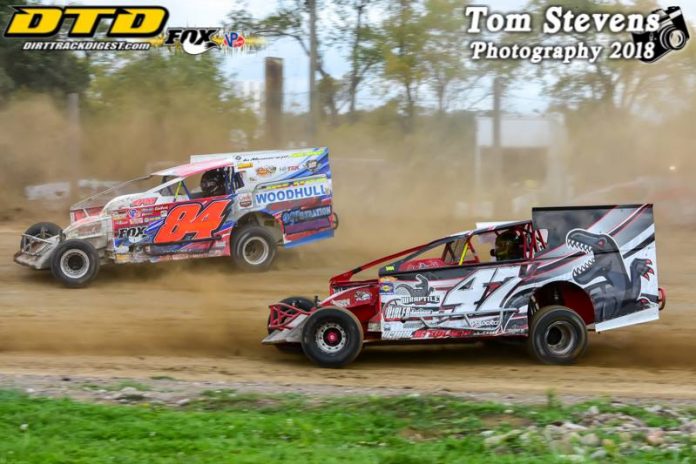 BATAVIA, NY – The Genesee Speedway will host Big Block modifieds for the second consecutive year as part of The Gladiator MMXIX presented by Wraptile Graphics and Professional Drainage Systems. Thursday June 13th will see the fan favorite class battle it out for 40 laps with a minimum of $2,000 going to the victor. For close to 30 years, the big-block Modifieds had remained absent from the 1/3 mile dirt oval that occupies the Genesee County Fairgrounds. That is until October of 2018 when the tremendously popular class made their return in the form of The Gladiator MMXVIII. A bevy of talented drivers converged on the speedway in an attempt to be the first to grace victory lane in the division since the early 90’s. When the 40 lap feature concluded, it was Ransomville, NY native Ryan Susice who would reign supreme and take home the top prize of $2,000.

In lieu of a successful 2018 showing, along with continued support from title sponsors Wraptile Graphics and Professional Drainage Systems, the Genesee Speedway is thrilled to announce the return of The Gladiator in 2019. On Thursday June 13th, some of the Northeast’s best Big-block drivers will return to the short track for another shot at glory. They will have their hands full with a stout group of open small block competitors who will also be taking a shot at the top of the podium. The night will once again feature a 40 lap main event but a unique twist on the redraw format. The top qualifiers will participate in a “Gladiator Style” redraw where instead of drawing a number to determine their own starting spots, drivers will draw and assign starting positions to other qualified drivers. Genesee’s exciting weekly program will fill out the remainder of the card making this event a must see.

More news and information regarding this marquee event will be available in the near future via Genesee Speedway’s Facebook page as well as www.genesee-speedway.com.