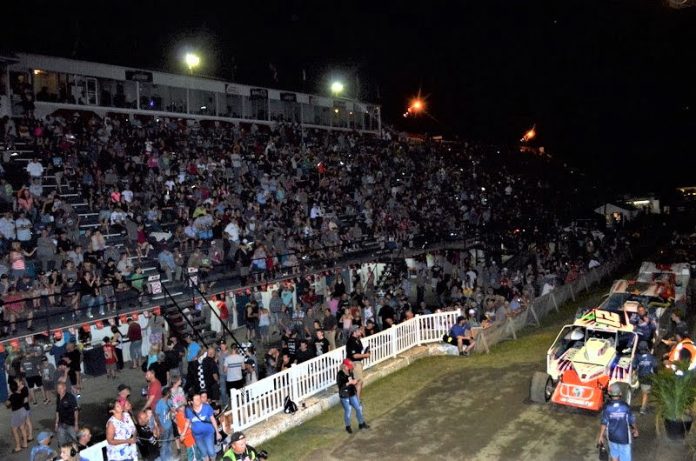 DRUMMONDVILLE, QUE – Known as F1 of the Clay, Autodrome Drummond is one of the most legendary of all Canadian race tracks. Race cars have blasted around the Quebec speedway since 1968 where it was once a monstrous 5/8ths mile. Today, the passion of the DIRTcar fans in Quebec remains stronger than ever.

In 2019 the stars and cars of the Super DIRTcar Series invade the half-mile Drummondville speedway on Monday, July 22. Last year, Series Champion Matt Sheppard and all-time great Danny Johnson split the pair of Series stops. Drummond is an integral track in the Series’ Quebec Swing as many call it.

The DIRTcar Hoosier Racing Tire Weekly Championship divisions highlight the show from Spring to Fall. DIRTcar 358 Modified drivers like Mathieu Desjardins, Mario Clair, Sébastien Gougeon, Steve Bernard, and Alex Therrien leave it all on the track week after week for a chance at the Track Championship.

Drummond also showcases the Mini-Drome inside the ⅓ mile oval where Slingshots put on an exciting show for the crowds week in and week out. Young and old alike show off their driving skills.

Locals know how wonderful the region around Drummondville is, and it would be an exceptional, and memorable, family weekend. On Friday night race fans can enjoy DIRTcar 358 and Sportsman Modifieds at sister track Autodrome Granby to make it a two-race weekend.

For some day-time fun, The Sanctuary St-Majorique is full of nature trails for those who love to hike. The Basin Farm is another family-friendly outdoors activity. Get up close and feed animals right out of your hand. It’s a sure hit for the kids.

For the thirsty race fan, The Bock Ale Microbrewery is a great place to wet your whistle. They even offer free tours of the brewery.

There are plenty of places to stay if you aren’t towing your bed with you: À la Bonne Vôtre, Grand Hôtel Times Drummondville, and the Hôtel et Suites Le Dauphin are all great options to round out your Quebec Swing!

17 years and under free anytime!