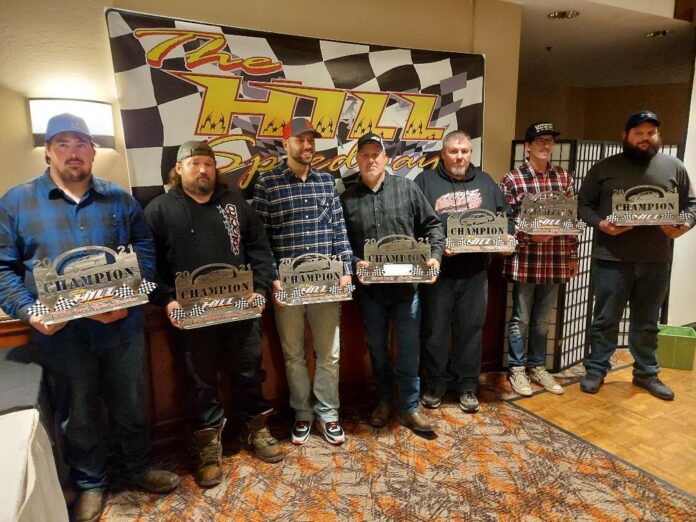 SAYRE, PA – Race teams, fans, and employees of The Hill Speedway gathered at the Sayre, PA Best Western Grand Victorian Inn for the championship banquet. The event honored the top five finishers in the track’s seven divisions. Following a cocktail hour with Hors D’oeuvres and a buffet dinner, the hardware was presented to the track’s finest.

Former track announcer Carol Houssock served as emcee, along with pit reporter Joe Snell. After recognizing promoters Eddie and Debby McKernan, she recalled that Mother Nature’s wrath resulted in a delay of several weeks in getting the season underway as well as the cancellation of four more races. She also informed those in attendance that a total of 182 race teams checked in and raced this year.

Sponsors remain a vital ingredient in any track’s success, and each was thanked for their support in what has been a difficult year for all businesses.

Drivers in attendance received point fund money to go along with their hardware. Drivers who attended every race in 2021 earned a free pit spot in 2022, while the track champions will receive a 2022 pit pass.

With 2021 business now concluded, race teams can begin to focus on 2022. Everyone is encouraged to go to the track’s website (thehillspeedway.com) and ‘like’ them on Facebook.