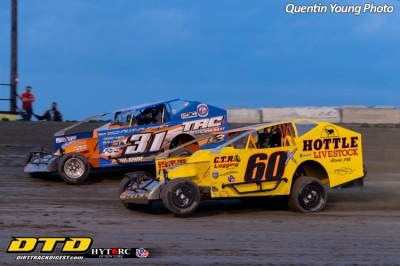 LISLE, NY – Racing and families go together like milk and cookies. Racing has provided a great way for families to get together, whether it’s sitting in the standings or spending long nights in the shop and racing on the track together. Saturday night at the Thunder Mountain Speedways, two families wrote another page in their extensive histories of racing. 12-year-old son Gordon Smith took his first DIRTcar Crate Sportsman win on the Mountain while father Rusty Smith won his first DIRTcar 358 Modified feature of the year. Zack Mills grabbed his first B-Walt’s Car Care 600cc Modified win, while Bob Mills held off nephew Buck Mills Jr. to take his first Pop’s Automotive Factory Stock win of the year.

Emotions ran high in victory lane for Rusty Smith. Smith came oh-so-close to his first win of the year just a week prior. A late race restart allowed Connor Sellars to take the lead and eventually the win. This week, however, the tough luck vanished in the 358 race for Smith to take his first win of the year. The win for Smith was also the first for car owner Kinser Hill after moving his No.60x up from the DIRTcar Sportsman class this year. And to cap it all off, his son Gordon won the Sportsman race, which ran right before his 358 race.

“I’m not gonna lie, last week we left here with our tails between our legs”, said Smith in victory lane. “All three cars were fast in qualifying and early in the feature, but they tapered off by the end. We backed up our adjustments a little bit this week. I didn’t get to see a lap of Gordon’s feature, but I’m really proud of him.”

Rusty Smith has a long and storied racing career, racing for most of his life on asphalt and dirt. With the success of his son Gordon, however, he is writing a new chapter in his love for the sport.

“I’ve raced my whole life, almost forty years.”, said Smith. “The most fun I’ve ever had is on Friday night at Utica-Rome being a crew chief! Coming here tonight to see him beat a bunch of very good guys in the class as a twelve-year-old is awesome. We were at a baseball camp all week in Oneonta, and then to come back and do this on the weekend. I’m a very proud Dad.

It’s safe to say Gordon Smith had a busy week. Gordon came back from the baseball camp to run Utica-Rome Speedway Friday and on the Mountain Saturday. Smith, much like his Dad, was also very close to breaking through for his first win earlier this year. Smith has led laps in multiple features early this year, but just hasn’t quite had enough. He faced early challenges from Mike Austin and late challenges from Hunter Lapp. Lapp took a peek underneath Smith off of turn four on the final lap, but Smith held him off to take his first win at Thunder Mountain.

“We were really good on the bottom tonight” said Smith in victory lane. “I made a mistake in four on the last lap. The crew said they [Hunter Lapp] got a nose under me, but couldn’t get by. I didn’t really see anybody next to me most of the night. I want to thank my Dad, uncle Larry, C&R Storage Units, and American Fireworks.”

Zack Mills has faced a lot of adversity this year in the B-Walt’s Car Care 600cc Modified class. Mills has dealt with mechanical failures and tough luck all this year. However, the stars aligned for Mills on June 11th. Mills started on the front row and successfully held off challenges from top runners Jake Waibel and TJ Smith to take a very popular win with the fans. Mills is the youngest son of Buck Mills Sr., and has added to extensive lists of Mills that have visited Victory Lane.

“It helped a lot to be up front early. I think the guys that race here are some of if not the best 600 guys around. If you make a mistake one time, they’re going to go right by you. A big thank you to my boss Tom who put a lot of money into this car for me. Thank you to my buddy Ernie who helps me weekly, Ryan Jordan for setup advice, all of my friends and family, and all of the other 600 guys that help me out. Denny Leigh, Butch Green, Rich Green, and a bunch of guys in the class who helped me out. It’s a great class to be in with guys like them.”

Bob Mills has had speed all year in the Pop’s Automotive Factory Stocks. The No.24 has won almost every heat race this year on the Mountain, but victory lane in the feature proved elusive. This week was different. Just like his nephew Zack, Uncle Bob went wire-to-wire despite challenges from nephew Buck Mills Jr. and Jason Rhodes. This win was Mills’ first of the year at the Thunder Mountain Speedway.

“That was the most fun I’ve had all year”, said Mills with a big smile. “I usually pick my brother’s [Buck Mills Sr.] brain a lot for setup advice. Thanks a lot senior, this one worked out. I want to thank R.Mills Photography, Denny Hubbard, Don’s Affordable Cars, Ricky, and my wife.”