MIDDLETOWN, NY June 27)……..Headlining the Saturday, July 2 racing program at Orange County Fair Speedway is the 76-lap Summer Championship feature race paying $7,600 to the winner.  That in itself is a big deal.  Perhaps equally important at the race’s conclusion, the winner noted, and the overall driver points compiled, the 12 drivers who will battle for the 2022 United Rentals DIRTcar Big-Block Modified Championship will be determined.

Racing on July 2 and all subsequent scheduled races except for the season ending Eastern States Weekend will begin at 7:00 pm.

For fans, Grandstand and Drive-In gates open at 5:00 pm.  For the Summer Championship, reserved seating admission or Drive-In parking is $33.  General admission is $28, Senior/Military $24, Party Deck $150 (minimum 2, maximum 4). As always, kids 12 and under are admitted free for racing events. For reserved seating or Drive-In parking, call the Speedway Office at 845-342-2573.

Fans and competitors should frequently check the Orange County Fair Speedway website, www.orangecountyfairspeedway.net, for the latest news and information. 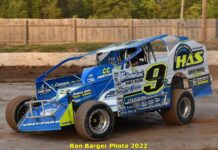