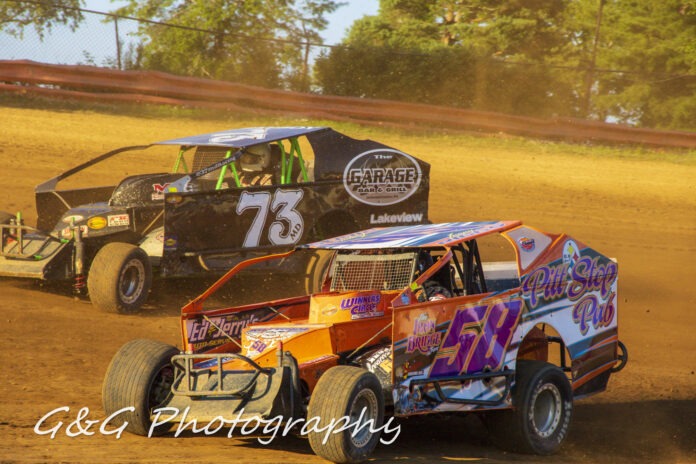 FRANKLIN, PA- “Racers and race fans enjoy Autograph Nights because it gives them an opportunity to mingle,” said Merle Black, the owner of Tri-City Raceway Park. The kids like it most because they get to meet their heroes and to see the cars up close.” And fans of all ages can participate this Sunday, August 14.
Black added, “one of the drawbacks to the Sunday Thunder events is that many of the race teams leave the speedway soon after their portion of the program is concluded, so there aren’t many of them left when we are able to allow the fans to enter the Pit area.” Insurance regulations do not allow for general admission ticket holders to enter the Pits until the races are over for the evening.
The Autograph Night eliminates that problem because all of the teams bring their cars onto the front stretch and the fans are allowed to come down out of the stands to greet the racers, take photos, get autographs, and spend some quality time with their favorites. Many of the drivers bring candy, picture cards, or other novelties to pass out to the fans as well.
The autograph session will be held after the completion of a 4 Your Car Connection Mini Stock feature held over from last week due to the storm that hit the speedway. The make-up race will start at 5:30, so fans will want to arrive early to take in all the action!
In addition to the make-up race and the autograph session, Black has added another division to Sunday’s card. The RUSH Modifieds will be running as well, making for a five-division, six-feature extravaganza.
The points battles will provide extra excitement to the action-packed show. Jack Sodeman, Jr. is only fifteen points ahead of the region’s hottest driver, A.J. Flick, in the Shawgo Real Estate LLC 410 Sprint Cars. And, in the Donovan & Bauer Auto Group 358 Modifieds, Kevin Hoffman holds a nine point advantage over Jimmy Holden. Pat Fielding now leads Tyler Wyant by ten markers in the Hovis Auto & Truck Supply Pro Stock division, which will have a double feature night coming up on August 28. Despite his many wins this season, Levi “the Rascal” Maskal leads Matt Urey by 23 counters, so the double feature format this week could produce some more drama in that class as well.
And, the fans will get this with no increase in the ticket prices!
Adult admission (for those aged 16 to 62) on August 14 will be the usual $15. Seniors (ages 62 and up) will be admitted for $13. Students (ages 10 to 16) will be admitted for $10. Children (ages 10 and under) will be admitted for free. Family Passes (good for two adults of any age and two students) will be $45. The Pit Passes will be $30. And, parking is plentiful and free at the speedway.
Pit gates will open at 2 p.m. on August 14. The spectator gates will open at 4 p.m. and racing will be a half hour earlier than normal, 5:30 p.m.
Remember that the World of Outlaws Late Model Series will return to Tri-City Raceway Park on August 21. Rookie of the Year contender Max Blair, from nearby Centerville, will be back to challenge some of the toughest hombres ever to wheel a Super Late Model. Joining Blair and company will be the 4 Your Car Connection Mini Stocks.
The final Sunday Thunder, four-division program, will be held on August 28, along with the extra feature for the Hovis Auto & Truck Supply Pro Stocks.
Further information about Tri-City Raceway Park can be obtained by calling the track office at 724-967-4601, or by e-mailing the office at tricityracewaypark2020@gmail.com. Or, you can check the web at Tri-CityRacewayPark.com, or the Facebook page at Tri City Raceway Park. Tri-City Raceway Park is located just a few miles north of Franklin, PA, at 3430 State Route 417 in Oakland Township.