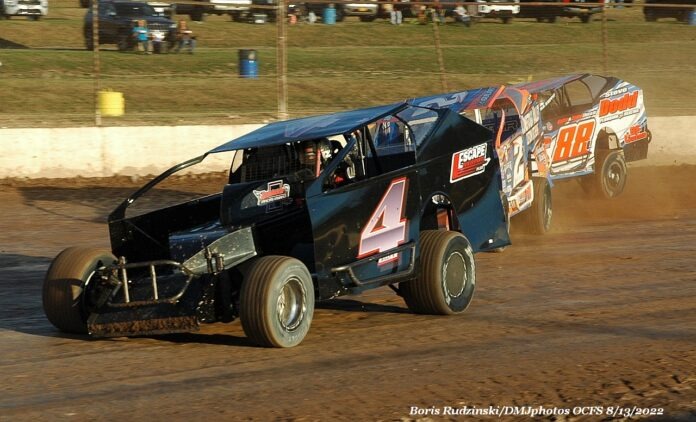 MIDDLETOWN, NY-Season-long point titles will be decided in all racing divisions at Orange County Fair Speedway on Saturday evening, August 27, Champions Night at the historic Middletown five-eighths-mile clay surfaced race track. Headlining the program will be the battle for the United Rentals DIRTcar Big Block Modified Championship which will see the titlist take home a $30,000 bonus.

Through a season-long accumulation of wins and points as well as an elimination format, four Big-Block Modified division drivers are eligible for the championship. The champion will be the highest finisher of the four in the weekly season wrap up 30-lap feature race that has a top prize of $5,000. The feature race finishing order will also determine the final point positions 2-3-4 and their corresponding lucrative bonus awards. And with the top 12 drivers sharing in the Big-Block Modified point fund, feature race finishing positions and accompanying points are equally important.

While much of the attention will be focused on the Big-Block Modifieds, drivers in Orange County’s other racing divisions, H.O. Penn Small-Block Modifieds, Arkel Motors Sportsman, Precision Hydraulic & Oil Rookie Sportsman, and NAPA Northeast Parts Group Street Stocks will be engaged in their own division point battles leading to their respective track championships and point fund distributions, also to be determined on August 27.

Anthony Perrego (Small-Block Modifieds), Bob Sleight, Jr. (Street Stocks), and Joey Conklin (Rookie Sportsman) have comfortable though not insurmountable point leads in their respective divisions. In the Sportsman rankings, however, only the thinnest margin separate Mike Saba and Cody Higbie at the top of the point standings.

Qualifying races will set the fields for each division’s feature race.

On August 27, General Admission is $20, Senior/Military $16, Party Deck $140 (minimum 2, maximum 4). As always, kids 12 and under are admitted free for racing events. Pit admission $35, OCFS/DIRTcar member $30. The Pits open at 3:30 pm, the Stands and Drive-In at 5:00 pm, with racing beginning at 7:00 pm. For the latest racing news and event information, fans and competitors should check the speedway website, www.orangecountyfairspeedway.net and social media.