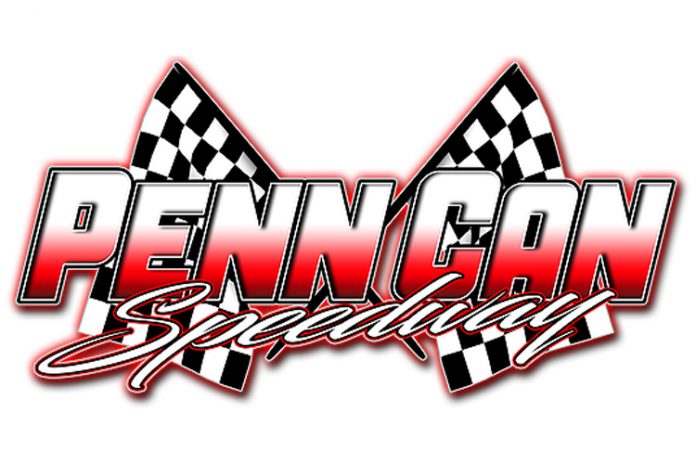 SUSQUEHANNA, PA – You couldn’t ask for a better night of racing I’m Friday July 31st epic and Speedway. That’s A-day that Brad Schaffer will not forget soon or for that matter in his lifetime. The 2020 season has been a first for many drivers in for one driver it’s been a winning season. Tommy Groover has dominated the factory stock division It doesn’t look to slow down anytime soon. I think I heard someone say something about a bounty and the details are going to be released Monday night.

The last time Brad Schaffer visited victory lane was 16 years ago and as he told announcer Craig Hawley, in victory lane, they’re gonna try to make it back to victory lane just a little bit sooner. The Schaffer racing team is an example of racing the way it should be. Always willing to lend a hand, always having a positive attitude and always appreciating their time together. They always say racing is one big family and with #014 team that’s what it’s all about. Brad couldn’t thank his crew enough for all the work that they have done and support that has been given.

Brett Tonkin is probably one of the busiest men on a Friday night as he does double duty running modified and sportsman. That Hollywood smile could be seen from one end of the grandstands to the other as he got out of his car in victory lane. It’s not easy as Penn Can has a stout field of 602 crates with a strong 24 car count.

This Street Stocks had a busy night with their July 3rd held over make a feature plus another feature. Dusty Decker coming out on top over a 20 car field. Steve Polhamus tried everything he could to rattle the young guns cage but to no avail. The 2nd street stock feature was almost a mirrored from the 1st feature with Dusty Decker and Polhamus. Unfortunately, Dusty would be regulated to the rear after a call, that many have questioned, but that did not deter the youngster as he ended up finishing 5th with Tyler Yeagle taking the top spot over Doug Polhamus and Shane Wolf.

Tommy Groover once again found victory lane with 14 factory stocks in attendance. Alicia Towner able to keep Groover in her sights but just could never get close enough to make the final pass.

The 600cc modifieds saw Jacob Waibel take his 1st victory of 2020 at Penn Can. The young gun always seems to be under the radar and then the last 5 laps comes out of nowhere. This time there was no denying it as he kept the family own ##99 out front and center for 20 laps.

Nick Kennedy is probably the most resilient drivers at Penn Can Speedway. Last Friday Kennedy would see his #N2 totaled after an on track Incident. There would be no garage time Saturday as Kennedy prepared to marry the love of his life Cassie on Saturday. The rest of the week was spent dismantling the car and getting the new car ready. The X car made its debut and never skipping a beat Kennedy would pull into victory lane. Resilience and determination would not keep the Kennedy clan down.

A lot of big things are coming up for the month of August for Penn Can Speedway. This Friday August 7th, we will be honoring our 1st responders, health care workers and all the essential people. They have made life a little easier for us all during these crazy times. We are asking everyone to make a thank you poster. It can be for someone specific, a company or something in general. You can proudly display them during intermission when we ask them to come to the flaggers stand for recognition.

Backpack night will be Aug.14th Friday and we hope to have over 200 with some items to put in the backpacks. We just don’t know if the kids will be taking them to school or to the kitchen table but at least there will be a backpack to take. Next up on the card will be the popular CRSA Sprint cars making their 2nd appearance of the 2020 season. Their last feature had the crowd on their feet. We’ll see if Ruggles can make two in a row.

The Patriot Sprint tour will be making an appearance Aug. 28th. We might see some heavy hitters come in since URC will be off. The program will consist of modifieds, factory stock, 600cc modified,4 cylinders and juniors.

Now let’s talk about heavy hitters because the following night will be the 1st appearance of the Renegade Monster Truck Tour. Tickets for that event can be purchased online at monstersinthemountains.com and the earlier you buy them the cheaper they are. Tickets will also be on sale the day of the event. There will also be mini monster trucks along with a kid zone. The popular monster truck ride will also be on hand for the fans. Keep checking our Facebook page for updates as the month progresses.