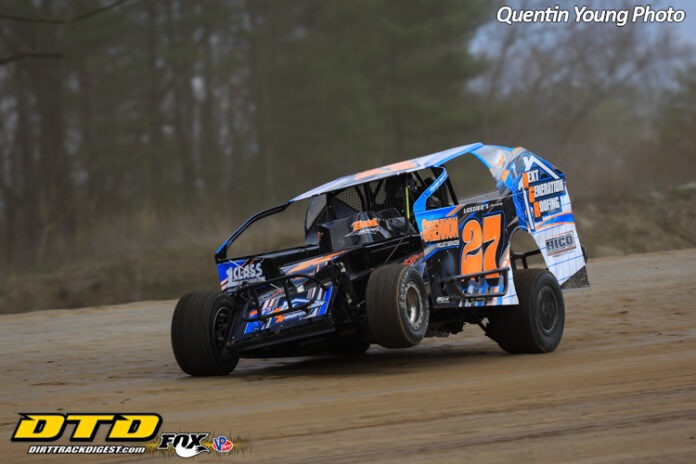 But he got a lot more than he hoped for.

After inheriting the lead when Mike Maresca and Anthony Perrego tangled while battling for the lead, Pitts ran a perfect race and pulled off a huge upset by winning the 35-lap modified feature at the historic Malta track.

Pitts is a three-time sportsman champion who moved up to big blocks in the latter weeks of the 2018 season. With many of Albany-Saratoga’s big names, including defending modified champion and opening-night winner Marc Johnson, opting to run the Super DIRT Series race at Bristol Motor Speedway, Pitts went into Friday night thinking he had a shot at his first career top-five finish. Instead, he wound up standing in victory lane.

“I never expected this,” he said.

But why not? Pitts won his heat race, putting him on the outside pole in the feature, and racing on a dry, slick track, no one was going to be running the top to get to the front.

Maresca and Perrego also won their heat races, putting them in the top three for the heads-up start, and when the inside row got the jump when starter Rich Peterson dropped the green flag, Pitts found himself third, behind Maresca and Perrego.

Four caution flags flew in the first 12 laps, but the complexion of the race never changed. The outside just wasn’t working, and all Perrego could do was chase Maresca.

But then things suddenly changed. The leaders got into traffic on lap 22, and the next time around, Maresca swung to the outside in turn four to get around Kris Vernold, while Perrego opted to stay low. The cars were three-wide coming down the front straightaway and as they entered turn one, Vernold couldn’t hold the bottom, making contact with Perrego and sending him into Maresca. Maresca and Perrego then spun into the first turn, giving the lead to Pitts, who had been running a distant third.

That incident also put L.J. Lombardo into second, and he tried to put some heat on Pitts on the restart, but because he had the preferred line, Pitts just stuck to the bottom for the last 10 laps to record the first modified win of his career.

Looking back at the last 10 laps, Pitts said, “Honestly, I was waiting for someone to go by me.”

Lombardo’s second-place run was his best career finish at Albany-Saratoga, while Jackie Brown Jr. ran a strong race to finish third. He was followed by Matt DeLorenzo and Matt Depew.

The front row was also the place to be in the 25-lap sportsman feature, as Pat Jones led flag to flag to chalk up his second career victory. Andrew Buff charged from a 20th starting position to finish second, with Connor Cleveland third. Cleveland was involved in an incident with Jon Miller early in the race and drove right over the front of Miller’s car, but Cleveland kept his own car moving, losing just a couple of spots, and he recovered for the podium finish.

Rich Crane came off the front row and posted his first in of the season in the 25-lap pro stock feature. A caution on lap 19, caused by a spin by Scott Towslee, gave both Chad Jeseo, looking for his second straight win, and Rob Yetman a shot at the leader, but Crane pulled away in the last six laps, with Yetman finishing second, over a second behind Crane, and Jason Meltz getting up for third.

Chris Jakubiak passed Gerard LeClair coming out of the fourth turn on the final lap to record his first career win in the 20-lap limited sportsman feature. LeClair had set the pace for 19 and three-quarter laps, but couldn’t hold off Jakubiak, who had started fourth, in the final 100 yards. Taylor Wason crossed the finish line third.

Hunter Sanchez started dead-last in the 21-car street stock field, but only needed seven laps to get to the front and went on to win the 15-lap feature. Following Sanchez across the finish line were Kaleb Shepard and Josh Bussino. Results of that race were unofficial, pending a review.

Jaxson Ryan picked up his second win in as many tries in the 15-lap four-cylinder feature, easily outdistancing Damian Ward and David Frame. Robert Garney was fifth overall and had the top-finishing single-cam car for the second week in a row.