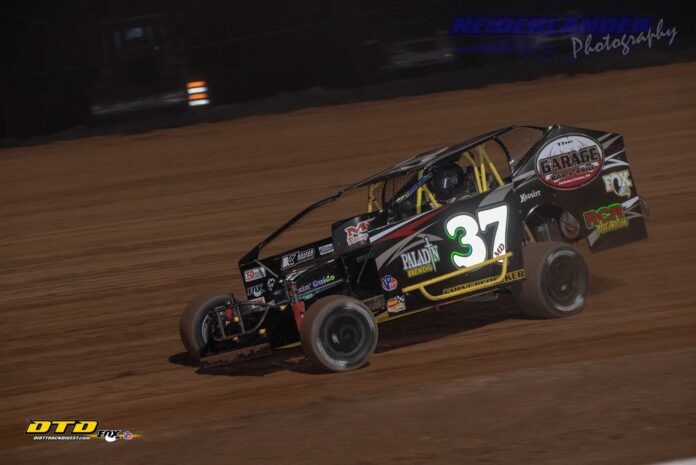 FRANKLIN, PA – Jack Sodeman, Jr. scored his second feature win in the Shawgo Real Estate LLC 410 Sprints to expand upon his point lead in his quest for a second straight championship.

“It feels good to end up in victory lane,” said the tired but happy winner 410 Sprint winner. “We gave up a few races when we had front row starting spots. We got up really early today and replaced the rear end. It was just my dad and me,” he explained. Sodeman gave props to the track crew for getting the surface prepared. “The track was beautiful, you could run the top or you could run the bottom.”

In the Shawgo Real Estate LLC feature, Kyle Colwell and Darin Gallagher led the field to the starting line in turn four. Brandon Matus and Logan McCandless were in the second row, with Chase Matheny and Jack Sodeman, Jr. in the third. Matt Farnham graced row four along with the last Sunday Thunder victor, A.J. Flick. Jeremy Weaver and veteran Bob McMillin were in row five for the 25 lapper.

Gallagher rolled into the lead on the opening lap, followed by Sodeman, who rode the rim to advance. Colwell, Brandon Matus, McCandless, and Flick remained close.

For the first several laps, it was the teacher who was the student, as Sodeman chased his protege, Gallagher. But Sodeman pulled the trigger on the inside of turns three and four to assume command on lap seven. Meanwhile, Flick was on the charge, advancing from eighth to third in the opening ten laps.

Disaster struck the third generation driver on lap 14, when Flick flipped his car in the third corner. During the caution period, Gallagher surrendered his second place starting spot, so that opened up positions in the top five for the restart.

Sodeman powered away and completed the remaining laps without interruption. Farnham came up to second, with Brandon Matus, Brent Matus, and Colwell completing the top five. Positions six through ten went to McMillin, Matheny, Gallagher, Flick, and McCandless.

The Donovan and Bauer Auto Group heat races for the Shawgo Real Estate LLC 410 Sprints went to Gallagher and Farnham. There was no B Main.

In the Krill Recycling LLC 358 Modifieds, Kyle Inman led the opening lap from his pole position, with Ryan Riffe challenging on the outside. But Jeremiah Shingledecker had the inside line mastered and he crossed the scoring loop ahead of Inman just as the caution flag came out for Riffe, who spun from contention.

That put Shingledecker on the front row for the restart, with Inman beside him. Jimmy Holden was up to third with Lonny Riggs, and Kevin Hoffman, and Kyle Fink next.
There were two more cautions over the remainder of the race. But Inman was no match for Shingledecker on either restart. Holden fought off Hoffman for third and then he closed in on Inman as the laps wound down.

Shingledecker had nearly a six second advantage over Inman at the checkers. Holden was a close third, with Hoffman and Riggs in tow. Fink was sixth, with D.J. Schrader, Sid Unverzagt, Jr., Curt Bish, and Nathan McDowell completing the top ten.

Fink and Shingledecker took the qualifiers presented by Donovan and Bauer Auto Group. There was no B Main for the Krill Recycling 358 Modifieds this night.

In the Hovis Auto and Truck Supply Pro Stocks, It was a sibling rivalry with Curtis J. Bish and his brother, Curt, duking it out for the lead. Lurking in their shadows was the Seneca Slider, Bobby Whitling. Whitling snuck by Curt Bish on the inside midway through the race and then he drove up beside Curtis J. Bish within a lap or two. Whitling and Curtis J. Bish raced side by side for several laps.

Whitling used the inside line to take command with just a couple of laps remaining. Curtis J. Bish stayed close, but he could not get the momentum going on the top side to chase down Whitling.

The Donovan and Bauer Auto Group heat races for the Hovis Auto & Truck Supply Pro Stocks went to Randy Wyant and Curtis J. Bish. There was no B Main.

Dalton Speer and Justin Bailey won the Donovan and Bauer Auto Group heat races for the 4 Your Car Connection Mini Stocks. There was no B Main.

Tri-City Raceway Park will host the ULMS Late Models on Sunday, May 23, presented courtesy of the Donovan & Bauer Auto Group. Also on the card will be the 305 Sprint Cars.

In addition to the full show for the winged warriors, there will be a make-up feature carried over from the 2020 season. The following week will be a Sunday Thunder program consisting of the speedway’s normal divisions: the Shawgo Real Estate LLC 410 Sprint Cars, the Krill Recycling LLC 358 Modifieds, the Hovis Auto & Truck Supply Pro Stocks, and the 4 Your Car Connection Mini Stocks.

Tri-City Raceway Park is located on State Route 3430 in Oakland Township, which is a short ride outside the City of Franklin. Remember that you can get information regarding Tri-City Raceway Park by calling the track office, at 724-967-4601, or via e-mail at tricityracewaypark2020@gmail.com. You can also check out the website at www.Tri-CityRacewayPark.com, or the Facebook page at Tri City Raceway Park.