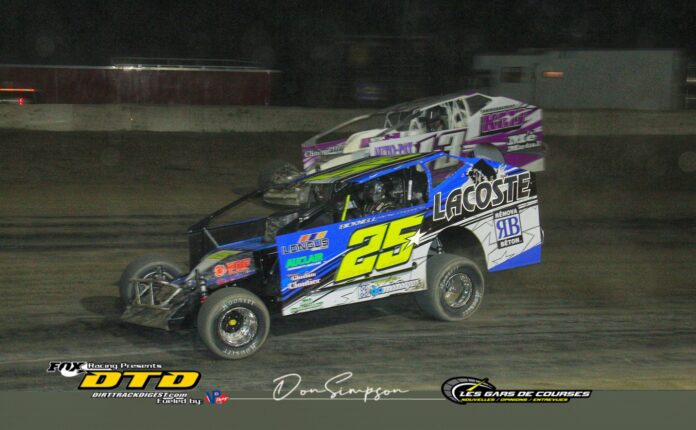 SAINT-MARCEL-DE-RECHELIEU, QC – Thirty-four cars were in the pits and Steve Bernier got the win in front of Steve Bernard and Michaël Parent. With his win, Bernier is the 2021 track champ. Even Racine won the rookie of the year award.

Alex Therrien won the Lightning Sprints Feature and the track championship with another dominant performance. Therrien finished in front of veteran Éric Sundborg and Tommy Moreau. Jordan Roy is the rookie of the year.

Quebec’s Modlites were on the card and this time it was Keven Boucher-Carrier who got the win. PO Trudel was finally able to stay away from mechanical problems and finished second. Ontario’s Jeff May finished third.

In the mini-mods feature, Pascal Bissonnette overcame a late charge from Jonathan Lapolice to win the race. Patrick Lapolice completed the top 3.

The Slingshot were also closing their championships and Jacob Nadeau in the junior class and Jeff Beaumier in the Senior class won the titles. Nadeau won the rookie of the year award and Yoan Nault won it in Senior Slingshot.