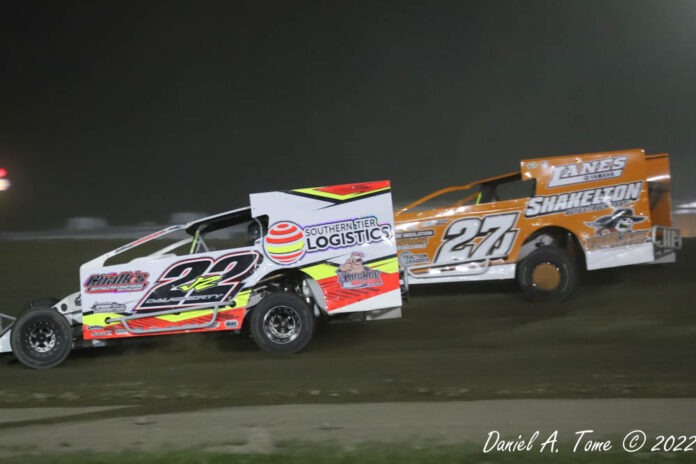 DUNDEE, NY-With only a few weeks remaining in the 2022 Outlaw Speedway Regular Season prior to post season play, every driver is jockeying for position as the point battles in each division are at a fever pitch.

“We have this week (August 12) along with August 19 before we shut down for a one week on August 26 then we head towards Championship Double Point Night on September 2, stated Outlaw Speedway owner, Tyler Siri.  My crew put a ton of effort into a major overhaul of this place a few weeks ago in preparation of numerous August, September and October Special events.  This week it is a Super 7 Show with a King of the Ring for the AR Tire Sportsman as I have put up some added money for the winner.”

For racers and fans that are obsessed with point battles it does not get any better than this with virtually every class track championship up for grabs so participation in this event is imperative.

On the track for the August 12, 2022, event it will be a Regular Super 7 Show featuring all the Outlaw Speedway’s weekly divisions including the Friendly Chrysler, Dodge, Jeep, Ram Modifieds along with the Sunrise Insulation American Racer Tire Crate Sportsman and the Speed Connection DIRTcar Hoosier Tire Sportsman.  Also, in action it will be the Stan’s No Tubes Street Stocks, the NAPA Hobby Stocks as well as the Winner’s Circle Deli Mini Stocks and the Swarthout Recycling 600 Mods.  The Fritz Masonry Youth Bandit Division will also be in action.

Because of the August 5, rain postponement, the $20,000 Fireworks Extravaganza along with the Gene Dupuy Memorial will also be rolled over to the Friday, August 12 show providing a full and exciting night of action at the Fast 4/10 of a mile clay oval.

The Outlaw Saloon located pit side when the gates open offering ice cold beer with a top deck observation view of the speedway.

The all-new Turn 4 Tavern will be up and running for thirsty fans in the Main Grandstand Seating Area.

All gate times, admission prices, weather updates as well as any additional late breaking news will be posted at www.Facebook.com/OutlawSpeedwayLLC/.

Looking ahead to the biggest regular season event of the 2022 season it will be the running of the First Annual Ted Siri Memorial featuring the Tony Stewart TEZOS Flo Racing All Star Circuit of Champions 410 Sprint Cars presented by Lane’s Yamaha on Friday, August 19, 2022.

“When I put this year’s schedule together, I wanted to make sure that we had a block buster show to coincide with the events surrounding NASCAR weekend at nearby Watkins Glen Speedway.  This is the tracks 65th Anniversary and I wanted to do something exceptional in my dad’s memory.”  That once again according to Siri.

Ted Siri was a supporter of the Outlaw Speedway as well as his son, Tyler Siri’s biggest fan.  His memory will be recognized as part of the August 19 event which will pay the Friendly Chrysler, Dodge, Jeep, Ram Modified feature winner a whomping $4321.00.

The schedule for the August 19 event currently calls for qualifying events in both the Modifieds and 410 Sprints.  All other classes will be feature only.

The Tony Stewart owned, All Star Circuit of Champions is a highly visible 410 Sprint Car Touring Series and it is expected that all series regulars will be at Outlaw on August 19 including the likes of Justin Peck, Tyler Courtney, Zeb Wise, Bill Balog, Cap Henry, Kyle Reinhardt and Parker Price Miller.  It is also anticipated that local runners in Jared Zimbardi, Pauli Colagiovanni, Davey Franek and others will be at Outlaw Speedway all with plenty of laps around the Fast 4/10 of a mile clay oval.  Danny Dietrich will lead the charge of the Pennsylvania Posse contingent that will make the tow to the Yates County oval which kicks off a three-night New York swing for the ASCOC.

In addition to Facebook, other valuable information regarding the track including the current point standings, marketing partners, contacts, current and former press releases and race results along with class rules log on at www.outlawspeedwayllc.com.

The Outlaw Speedway, in its 65th season providing great racing action is located on Rt. 14a just outside of Dundee, NY right in the heart of the Finger lakes Region of Upstate, New York.  Just a short drive from Elmira/Corning, Watkins Glen, Geneva, Seneca Falls, Penn Yan and Bath/Hammondsport.