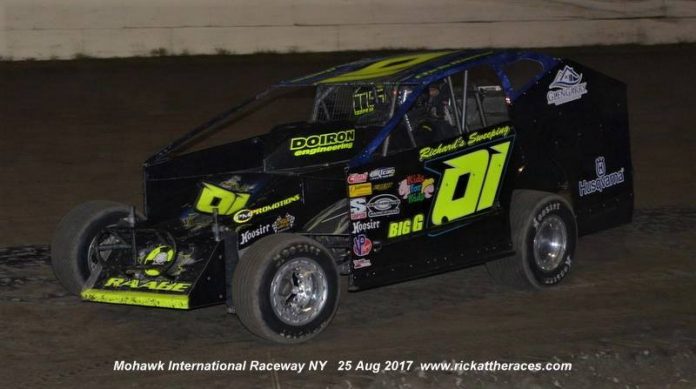 AWKWASANE, NY – Another exciting event this past Friday night was one for the record books at the Mohawk International Raceway as Chris Raabe finally broke through for his first 358 Modified win of the season, Joel Hargrave became the first 2 time winner in Sportsman, Devin Willis survived a late race restart for his first ever Novice Sportsman checkered flag, Kevin Foster went back to back in Mod Lite while Richard Thorton continued his dominance with win number 8 in Bandit.

Brian McDonald set the pace early on at the start of the 30 lap 358 Modified feature event over George Foley, Lance Willix, Chris Raabe and Danny Johnson. After his 2nd win of the season last Sunday at Cornwall and a very fast race track McDonald had the car to beat as he led the opening 9 laps while Chris Raabe was right there to challenge him for the race lead. On lap 10 McDonald’s great run came to a disappointing end as he broke while leading off turn 2 bringing out the first yellow of the night. On the restart new leader Chris Raabe took control of the field as Tim Fuller made a big charge to 2nd after restarting in 5th with Lance Willix, Mike Maresca and Danny Johnson completing the top 5. As the laps clicked off it was clear that the battle for the win was going to be settled with Raabe and Fuller as they pulled away from the field. On lap 18 traffic started to come into play as Raabe led the way but Fuller closed on the back bumper. In traffic with 6 to go Fuller made a bid for the lead on the top lane but was not able to complete the pass as Raabe remained up front and in control. Coming to the white flag Raabe was once again in traffic and Fuller began to make his move. As they worked into turn 3 Chris Raabe flexed his muscle and used a great move to find clear race track and hold off a determined Tim Fuller to claim his first win of the season after weeks of struggling. Behind Fuller in 2nd was Lance Willix, Mike Maresca and Danny Johnson filling out the top 5.


The Sportsman division saw Billy Cook jump into the race lead at the drop of the green flag over Delbert Legrow Jr., Bruce Makinson, Styles Arquiett and Joel Hargrave. The veteran driver led the opening 8 laps while behind them Joel Hargrave was on the charge to the front. On lap 8 Hargrave bad a big move from 3rdto the lead in turn 2 with Cook, Makinson, Chris Frennier and Thomas Cook Completing the top 5. At the halfway point Joel Hargrave was the dominant force as he pulled out to well over a straight away advantage while behind him Billy Cook was in a huge battle with Bruce Makinson, Brent Kelsey, Thomas Cook and Chris Frennier. With 10 to go Hargrave began to enter traffic but with a huge lead was able to pick his lanes perfectly and have no issues out front. Over the final laps Joel Hargrave proved to be the best car on the speedway as he marched on to become the first 2 time winner in Sportsman at MIR in 2017. Bruce Makinson was able to cross the line in 2nd with Brent Kelsey following him to 3rd, Billy Cook had a fantastic showing in 4th with Moise Page coming from 10th on the grid to complete the top 5.

In the 15 lap Mod Lite feature Nick Mallette was the star of the show early on as he led the field over Deric Ellsworth, Jason Premo, Kevin Foster and Dan Reif. Mallette, who won earlier this season for the first time, was on a mission to claim his 2nd win of the year but Kevin Foster was on the charge to the front as well. After a restart on lap 8 Foster made his way to the race lead in turn 3 taking the lead away, with Mallette, Ellsworth, Harley Brown and Dan Reif completing the top 5. As the laps clicked off Kevin Foster continued to get fast and proved to be too much for the rest of the field on this night as he scored his 2nd win in as many weeks in Mod Lite. Mallette held on for 2nd with Deric Ellsworth, Harley Brown and Brady Rookey crossing in 5th.

The Novice Sportsman feature found Gregg Henry at the front of the field but new comer Devin Willis was on the charge and looking for the top spot. The former motocross rider has taken a liking to the dirt oval racing and found himself challenging for the lead by lap 7. On lap 8 Willis found the groove as he drove by henry for the top spot with Corey McCoy chasing from 3rd. On lap 14 the only yellow flew setting up a 1 lap dash to the checkered flag. When the green flew it no contest as Devin Willis pulled away and made it look easy to score his first ever Novice Sportsman feature win at Mohawk. Gregg Henry crossed in 2nd with Melvin Rush. Shawn Shaw and Corey McCoy completing the top 5.

In Bandit action Shane Ray looked to have things in control at the start of the 10 lap event as he led early but Richard Thorton was on the charge and looking for his 5th straight win. With 3 laps to go Thorton made the winning pass off turn 2 and not look back as he scored his 5th win in a row and 8th on the season. Shane Ray would finish up 2nd while Gary Sharlow would across the line 3rd at the checkers.

Next week points are on the line for all classes including the Unique Ecigs 358 Modified Series and The Number One Speed Equipment Sportsman Series as well. Racing action begins at 7:30pm. 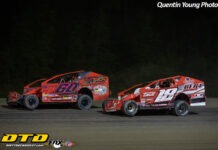