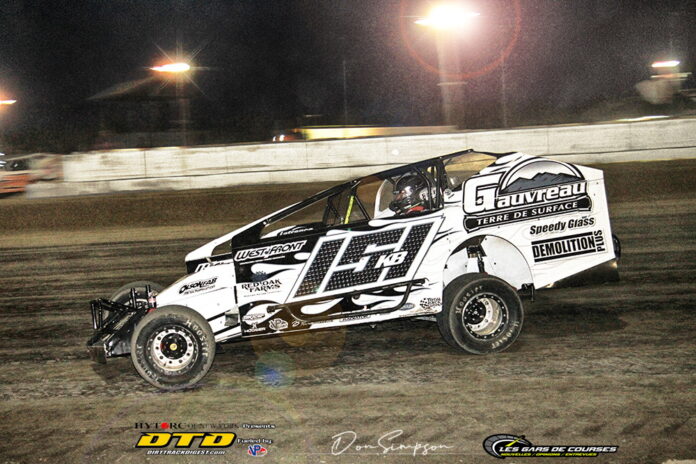 AKWASASNE, NY – On a beautiful July Friday evening the fans were treated to some fantastic racing. The GoodLeaf 358s, the CrossRoads Tobacco Sportsman, Novice Sportsman, Bandits, and Mod Lites along with an Enduro qualifier were on hand. After the some entertaining heat race action it was time for the features.

Next up the Mod Lites would come onto the track for a 12 lap feature. Harley Brown would lead the first 11 laps until on lap 12 Tristan Dibble would slide underneath, coming off of turn 4, to pick the win.

The Dirtcar 358s would be set for a 30 lap affair as Brian McDonald and Matt Woodruff would set the pace. McDonald would find the high side to his liking and would lead the first 10 laps in dominating fashion until the yellow would come out for Brad Reif. On the restart 20 laps to pick his first win of the season at Mohawk. McDonald stated in Victory Lane he lost his power steering for the last 10 laps.

The Sportsman feature would feature Chad Vallance and Steve Bushey from the front row. Blayden Arquette appeared to have the car to beat on this night, however Shane Pecore would begin to challenge Arquette for the lead. On lap 11 Pecore would come from the highside off of turn 2 for the lead. On lap 19 the yellow would come out for the first time as two cars come together entering turn 3. On the restart Pecore would check out on the field to pick up another win at Mohawk.

The Novice Sportsman would see Dillion Cole take the early lead until the yellow would come out for Kyle Reif on lap 2. On the restart Cole would jump out to the lead with Blaze Benedict in pursuit. WIth 4 to go, Benedict would overtake Cole to pick his first ever win.