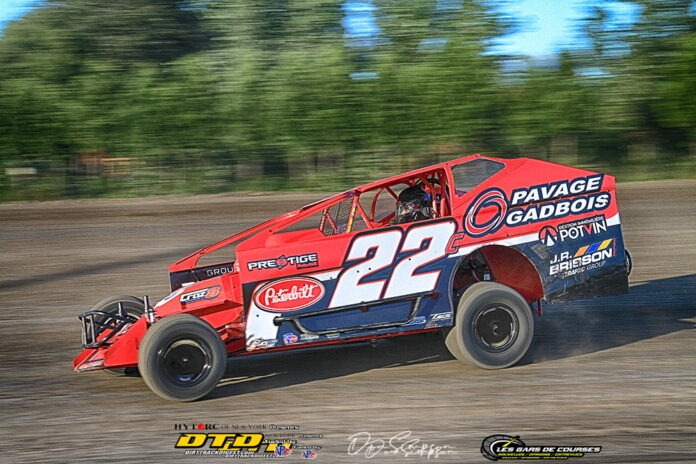 DIRTcar PRO STOCKS
After the green flag was thrown for the Pro Stock Feature, 2022 track champion Bruno Richard jumped out to an early lead.

The DIRTcar Pro Stock Feature commenced with 2022 track champion Bruno Richard taking the early lead. He held it for 17 laps before positions began to shuffle.

A caution brought the field back together, and then, on the restart, Jeseo muscled his way to the lead. From there, he held the lead to the end.

“I love it here,” Jeseo said. “The guys were very welcoming. They put a great show on. I mean, awesome weekend, to have us both nights. That’s awesome. I really like it.”

Second place finisher Bruno Richard knew immediately what he could have done differently for a better outcome.

“When I do the restart, he was in the front and I was in the middle and I tried to get it and I think I missed by myself,” Richard said. “I didn’t keep the top and moved my car. After that, it’s easy for two, three cars to pass like that. The car was perfect and after a little time, I need to go back on the bottom. Maybe I will lose a little heat on the tire. But I can’t ask for better than that.”

DIRTcar SPORTSMAN
The DIRTcar Sportsman took the track next with Codie Aubin starting on the pole and Bucko Branham to his outside.

Aubin took the lead at the start, setting an early pace ahead of the field. While he led, Cedric Gauvreau was on a charge to the front from 12th.

Running the high line, Gauvreau picked off 10 competitors in 19 laps, including Aubin for the lead.

Once out front, the Chelsea, QC driver cruised to the victory at the end of the 40-lap Feature – his fifth win at the track this season and second in two nights.

“We work hard weeks after weeks to get a good race car,” Gauvreau said. “I think we found something good this weekend. We had a very good car last night. We put the same setup up on for tonight’s race and it was awesome.”

While Aubin had to settle for second, he was still satisfied with the performance.

“We come up here for the first time this year and finish in the top three. It’s pretty good for us,” Aubin said.

Both Series will also return during the 50th Running of NAPA Auto Parts Super DIRT Week at Oswego Speedway, Oct. 3-9.