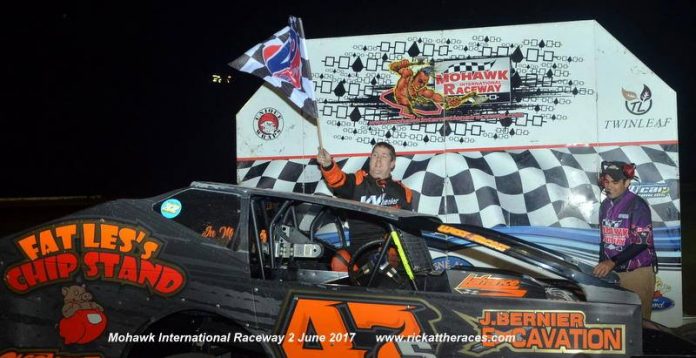 If there was ever a feel good story to be told it was this past Friday night at the Mohawk International Raceway as Corey Wheeler went head to head with the best in Modified racing for his first win at MIR and 2nd in the last 7 days. Joel Hargrave ended a 1 year winless drought in Sportsman, Kurt Russell stopped Junior Delormier’s bid for 3 in a row in Novice Sportsman, Deric Ellsworth notched his 2nd Mod Lite win in 3 weeks while Gary Sharlow held off Richard Thorton for the big win in the Bandits.

In the 358 Modifieds the question was could anyone stop Tim Fuller’s early season dominance? Fuller would have a long night as he started in 16th. When the green flew to start the event David Papineau would jump out into the top spot over Matt Woodruff, John Mulder, Corey Wheeler and Lance Willix. Papineau was fast in the early going and would stabilize his lead by 5 car lengths in the opening laps. On lap 5 the first yellow flew for Ryan Arbuthnot as he slowed off turn 1. When the green came back out it was once again Papineau in control but Corey Wheeler was on the move. After starting 5th Wheeler made his move taking 2nd from Woodruff on lap 12, then ran down the leader David Papineau, and the battle was on. At the halfway point Wheeler would take command of the race bringing 12th place starter Danny O’Brien to 2nd with Tim Fuller making some big moves to jump into 3rd spot with Papineau and Danny Johnson completing the top 5. As the laps clicked off the top 5 were start studded as Wheeler continued to lead with Fuller getting by Danny O’Brien for 2nd , Billy Dunn charged from 15th to 4th while Johnson continued to round out the top 5. With 3 to go Wheeler did all he could to hold off a very determined Tim Fuller and Danny O’Brien as these 3 drivers put on a fantastic show for the fans. After beating Danny Johnson 1 week ago in Cornwall Corey Wheeler did it again beating Tim Fuller and Danny O’Brien to collect the popular win and ending Fuller’s streak. Behind Fuller and O’Brien in the top 5 were Billy Dunn 4th and Danny Johnson 5th.

The Sportsman division saw 24 drivers take the green for 25 very fast laps. Anthony Rassmussen would charge to the lead at the drop of the green and was the class of the field early on over Joel Hargrave, Preston Forbes, Thomas Cook and Gab Cyr. On lap 6 veteran Delbert Legrow tangled with Zack Arquiett in turn 4 bringing out the caution flag, both cars continued on. The following lap Gab Cyr spun off turn 2 bringing out the yellow flag again. When the green flew Joel Hargrave used the top side to collect the lead over Rassmussen, Thomas Cook, Mosie Page and Ricky Thompson. Hargrave would open up a commanding lead on the field and showed he had the dominant car on this night. Behind them co- point leader Johnathon Ferguson was also on the move from his 15th starting spot as he broke into the top 5 on lap 18 and was in search of the leaders. On lap 18 the yellow flew again as Jordan Miller made heavy contact with a jersey barrier in turn 1 causing heavy damage to the front end of his machine, Miller was ok. When the green flew Hargrave remained strong in the top spot, and after 1 full year and 1 week, he finally put it all together scoring his first Sportsman feature win of the season. Moise Page made a late charge to claim 2nd with Anthony Rassmussen crossing in 3rd, Johnathon Ferguson would hold on for 4th while Ricky Thompson came from 21st starting spot to finish up 5th.

The Novice Sportsman division was set for a 15 lap contest and Kurt Russell (not the actor) would take away the lead from the outside of the front row over Brian McGinley, Dana Francis, Jason Anderson and Thunder Anderson. Russell had a dominant race car and was pulling away from the field as the top 5 were trying to keep pace. On lap 8 the first yellow flew for Greg Henry as he made contact with the wall in turn sending him pit side for the night. Over the next 3 laps, 3 cautions would fly for minor spins but Russell was not phased at all but the drivers behind him were determined to take away the lead. When the green flew for good on lap 12 Russell charged away while Dana Francis charged to the 2nd spot and was closing quickly on the leader. However Kurt Russell hold off all challenges to score his first career victory over Francis, Thunder Anderson, Junior Delormier and Melvin Rush.

The Mod Lite division has grown in popularity over the last few seasons at Mohawk and they put on a great show during their 15 lap event. Harley Brown was looking to erase the demons that have plagued him over the first 2 weeks as he took command of the field over Dan Reif and Karine Thibault. Brown would lead the opening 4 laps before opening day winner and defending track champion Deric Ellsworth would take over the lead while Dan Reif, Nick Mallette and Scott Mere would complete the top 5. On lap 6 Harley Brown would slow with rear end problems on his car. Brown would go pit side and return to the event for a 6th place finish at the checkers. On the restart Ellsworth would put his car on auto pilot and despite a late race surge by Dan Reif and points leader Nick Mallette, “Superman” would hold on claiming his 2nd win in 3 weeks over Dan Reif, Nick Mallette, Kevin Foster and Brad Reif.

The Bandit class saw 10 laps without a caution but the race did not lack one bit of action as veteran Gary Sharlow would lead the way early on but reigning track champion Richard Thorton was on the move and was looking for his 3rd straight win. Thorton did all he could to get by throughout the event using both outside and inside lanes but Sharlow stayed up front and in control. On the white flag lap Thorton had a great run on the top side of turn 1 and looked to be clear of Sharlow’s machine. The 2 drivers made slight contact allowing Sharlow to retake the lead. From there Gary Sharlow would drive on to his first win of the season over Richard Thorton who crossed in 2nd with a flat right rear tire while Curtis Smith took a brand new car to 3rd at the checkered flag.

Next week the 358 Modifieds will have some time to relax as they have the night off with the Empire Super Sprints taking center stage along with the Quebec Lightning Sprints plus a full show in all divisions. The green flag drops at 7:30pm.