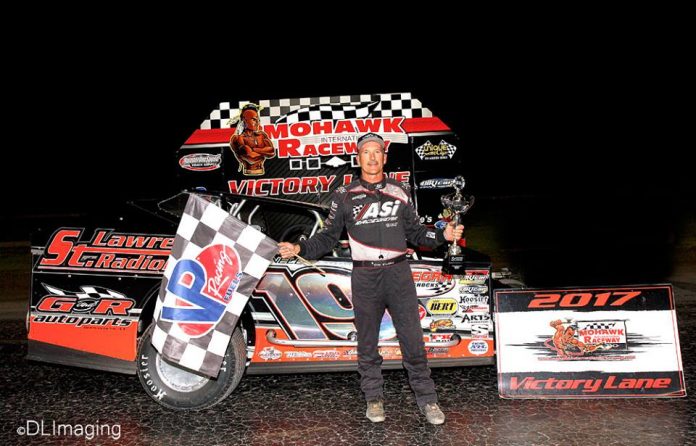 After an unheard of, 5 weeks off the 358 Modifieds were back in action this past Wednesday night for the Unique Ecigs Series opener along with a full show for all divisions. Tim Fuller held off a late charge by Carey Terrance to claim his 3rd 358 Modified win in 4 races, Thomas Cook denied Brent Kelsey’s bid for his first ever win taking the Sportsman 25 lap event, Nick Mallette scored his first ever Mod Lite win by mere inches, Gregg Henry and Taylor Doxtator both scored their first wins in Novice Sportsman and Bandit.

Ryan Arbuthnot and Tim Fuller led a quality filled field of 358 Modifieds to green with Fuller charging to the lead over Arbuthnot, JF Corriveau, Billy Dunn and Mario Clair. It didn’t take long for the Edwards New York native to stretch his lead out to over 5 seconds by lap 7 while behind him Lance Willix and Billy Dunn were both on the charge taking 2nd and 3rd while Arbuthnot and Clair continued their top 5 runs. By lap 13 Fuller began to work traffic while Willix was able to get away from Billy Dunn and try to run down the race leader. The first yellow flew on lap 17 for debris bunching the field up for a key restart for Lance Willix. When the green flew Fuller continued to run the top lane while Willix stayed committed to the bottom with Billy Dunn, Carey Terrance and JF Corriveau completing the top 5. The top 3 drivers once again began to pull away as the track also took a major change becoming more abrasive. This played into the hands of Willix as he took over the top spot on lap 29 with Fuller, Dunn, Terrance and Corriveau completing the top 5. The lead for Willix would be short lived as on lap 34 Willix was unable to clear lapped cars allowing Fuller to sneak by bringing Terrance with him to 2nd and the battle was on. Over the remaining laps Terrance gave Fuller all he could handle, even sailing to the top lane to try and get by off turn 2 on lap 49 but it was not to be on this night. Tim Fuller paced himself perfectly as he charged to win number 3 on the year with Terrance, Willix, Dunn and Mario Clair completing the top 5 at the line.


The 25 lap Sportsman got off to a wild start as Delbert Legrow and Thomas Cook made contact coming to the green flag, sending the field scattering. When all was done 11 cars had come together blocking the front stretch bringing out the red flag. Amazingly all drivers pulled away and were able to continue. When the race officially got started Cook got a little better start as he took the top spot away over Brent Kelsey, Delbert Legrow, Anthony Rassmussen and Ryan Stabler. With all drivers opting for the bottom lane Cook and Kelsey were able to pull away from the rest of the field and make it a 2 car battle for the lead while Legrow, despite a bent axle, was holding a solid 3rd with Rassmussen and Stabler challenging. Kelsey was charging hard looking for his first ever Sportsman win while Cook was looking to put a rough start to the year behind him. Kelsey tried all he could but Cook was strong at the halfway point while Legrow held onto 3rd with Johnathon Ferguson charging from 12th 4th while Stabler continued to complete the top 5. On lap 20 Robert Delormier broke the front end on his car bringing out the caution flag. On the final restart the handling started to fade on Thomas Cook’s ride while Kelsey started to take advantage. On the final lap Cook slid up off turn 2 allowing Kelsey to sneak down low. The 2 drivers made contact in turn 3 nearly spinning out. The 2 drivers were able to gather their cars and charge to the checkers off 4. Thomas Cook was able to prevail taking his first win of 2017 with Kelsey crossing 2nd over Legrow, Ferguson and Ryan Stabler.

The Bandit division saw a scary moment as Gary Sharlow tangled with another car slamming hard into the wall on the front stretch. Both drivers were able to walk away but were done for the night. On the restart new comers Taylor Doxtator and RJ Tresidder were the class of the field. Both drivers pulled away but Doxtator was the man to beat as he cruised to his first ever Mohawk Bandit win over Tresidder and 2015 champion Shane Ray.

Friday night Mohawk International Raceway will be back in action with a full show in all 5 classes with the good folks at SUNY Canton on hand. The green flag drops at the regular start time of 7:30pm.