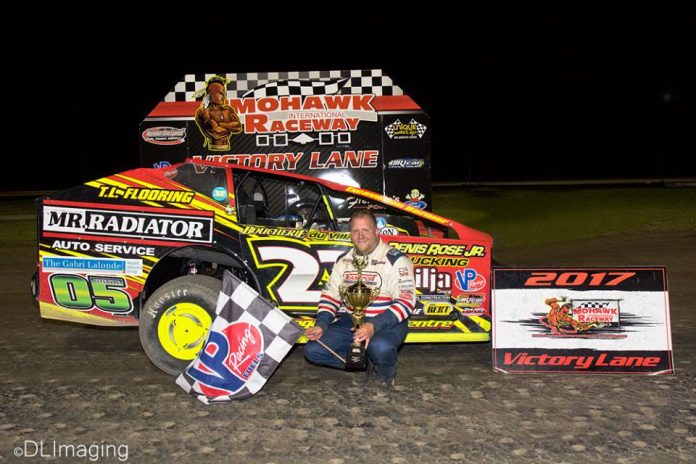 After 5 straight weeks of rain on Friday nights at the Mohawk International Raceway this past week’s action was incredible. In 358 Modifieds Billy Dunn claimed win number 1 of the season over Danny O’Brien by less than an inch. Mike Stacey led every lap in the 25 lap Sportsman feature, Melvin Rush scored his first ever win in Novice Sportsman, Dan Reif was the big winner in Mod Lite while Richard Thorton was victorious for the 4th time in the Bandits.

In the 358 Modified feature Matt Woodruff was looking for his first ever win on dirt as he jumped into the lead over Louie Jackson Jr., Ryan Arbuthnot, Joel Doiron and David Papineau. Woodruff had a great race car and was on a mission to get a win as he led by well over a straight away by lap 10 with Jackson and Arbuthnot battling for 2nd while Billy Dunn was on the move taking 4th with Jordan McCreadie compling the top 5. With Woodruff in front Billy Dunn decided to make a charge to the front as he took 2nd from Jackson on lap 13 and then ran down the race leader. On lap 16 Dunn finally got the run he was looking for as he powered by on the back stretch to take the lead with Woodruff falling to 2nd with Danny O’Brien, Jackson and Arbuthnot completing the top 5. It appeared Dunn was well on his way to an easy win but on lap 28 Lance Willix spun in turn 4 bringing out the only yellow. When the green flew it was the best 2 laps in recent memory as Dunn took the lead but Danny O’Brien was on the bottom and charging hard. On the final lap O’Brien pulled even with the leader and dragged raced Dunn into turn 3. Off turn 4 the top 2 drivers were side by side and crossed the line dead even at the checkered flag. After review Billy Dunn was flagged the winner, his first of the year. Danny O’Brien crossed in 2nd with Chris Raabe, Louie Jackson Jr. and Ryan Arbuthnot taking 5th.


Mike Stacey was the dominant force in the 25 lap Sportsman feature as he took the lead at the drop of the green with Jordan Miller Miguel Peterson, Gabriel Cyr and Delbert Legrow. Stacey had the fastest car on the race track on this night as he built up a lead by well over a straight away while behind him Jordan Miller, Miguel Peterson and Gabriel Cyr were in a war from 2nd thru 4th. On lap 13 the first yellow flew for Billy Cook who spun in turn 4. On the restart Stacey once again pulled away by 5 car lengths while Miguel Peterson was able to take 2nd with Ryan Stabler 3rd over Legrow and Cyr. On lap 16 the yellow flew for the final time as Preston Forbes broke the front end on his car on the back stretch. When the green flew Mike Stacey got a great start again as he took over the lead while Peterson was doing all he could to hold on to 2nd as Ryan Stabler was charging hard from the 3rd spot. At the finish Mike Stacey was clearly the dominant force and would march on to score his first Mohawk Sportsman victory. Ryan Stabler was able to get by Miguel Peterson for 2nd with Gabriel Cyr and Delbert Legrow crossing 5th.

Brady Rookey was the early leader in the 15 lap Mod Lite feature over Dan Reif and Harley Brown. Rookey looked well on his way to his first ever win but Dan Reif was on a mission. Reif was putting the pressure on Rookey and was able to get by for the top spot at the halfway point with Rookey falling to 2nd over Harley Brown, Scott Mere and Ben Cartier. As the laps wound down Dan Reif continued to pull away while Rookey, Scott Mere and Harley Brown continued their battle for a top 5 position. On this night Dan Reif was the man in charge as he took his first Mod Lite win of the year with Brady Rookey getting his best ever finish of 2nd over Scott Mere Ben Cartier and Harley Brown.

The 15 lap Novice Sportsman feature saw a couple of early cautions come out but once the laps clicked off Thomas Jock III took the lead and put on a driving clinic as he drove away from the field. Melvin Rush was able to clear all traffic and tried his best to reel in the leader with veteran Denis Gauvreau chasing from 3rd. On lap 13 Jock’s lead was washed away as the caution flew setting up a key restart for Melvin Rush. When the green flew Jock held the lead but Melvin Rush charged to the top side and made the winning pass in turn 1. Rush would drive on to score his first ever Mohawk win over Thomas Jock III and Denis Gauvreau.

Richard Thorton continued his great run in the Bandit divison as he dominated the 10 lap feature. Thorton took the lead on lap 3 and never looked back as he scored his 4th win of the year in 6 events. Curtis Smith crossed in 2nd with new comer John Bradley rounding out the top 3.

Next week the Number 1 Speed Equipment Sportsman Series will be set to go for a 35 lap contest along with a full show in all divisions. The action Kicks off at 7:30pm.