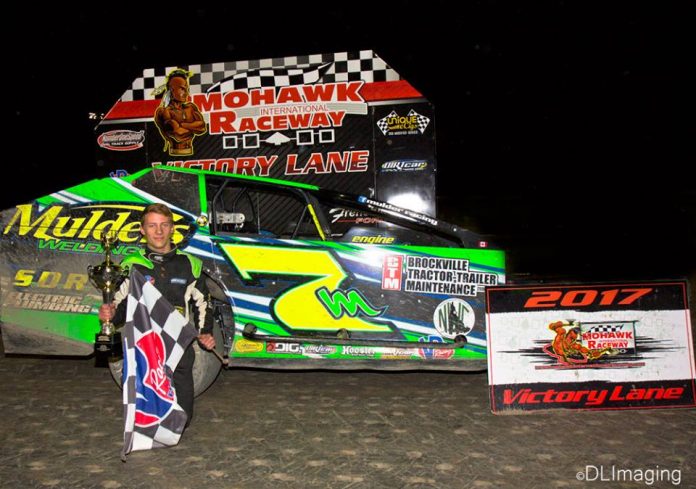 AKWESASNE, NY – The 358 Modified 30 lap event saw 18 year old Madison Mulder take the lead at the drop of the green but the lead would be short lived as the yellow flew for Carey Terrance who spun in turn 3. Terrance would rejoin at the tail of the field. On the restart Mulder would take control of the race with Brian McDonald Joel Doiron Corey Wheeler and Mike Maresca completing the top 5. Mulder had a stout car in the opening laps as behind him Brian McDonald had problems and headed to the pits under green while running in the number 2 spot. This would bring Doiron to 2nd with Maresca, Tim Fuller and Corey Wheeler making up the top 5. The race track began to change quickly and drivers started to find the top side to their liking as Madison Mulder continued to ride the cushion and stretch the lead to over a straight away by lap 15 over Doiron and Fuller. Over the next 6 laps Tim Fuller knew everyone was on the top side so the only way to catch the leader was from the bottom. Fuller did just that taking 2nd from Doiron in lapped traffic, and set sail after the leader. Mulder tried at will to navigate traffic but on lap 21 a slower car halted his pace allowing Fuller to sneak but on the bottom lane. Mulder tried the crossover move off turn 2 but Fuller was too strong and began to pull away. It appeared that the leader was going to march on to his 4th win of the season in dominant fashion, but coming to the white flag the motor expired on the front stretch, handing the lead to Mulder. The 2nd year Modified driver made a clean final lap and cruised on to his first career 358 Modified victory. Joel Doiron crossed in 2nd with Mike Maresca Corey Wheeler and Ryan Arbuthnot completing the top 5.

Jamie Begor and Shane Pecore brought a strong field of 28 drivers to the start of the Number One Speed Equipment Sportsman Series with Begor leading the way but Pecore was right there to challenge. On lap 4 Pecore took over the lead with Begor and Lalancette close behind. Over the next 10 laps these 3 drivers put on a classic battle for the race lead as Begor and Pecore swapped the lead several times as Lalancette did all he could from the 3rd spot. On lap 12 Pecore took over the race lead on the bottom and began to pull away. With Pecore in front the battle was on as Begor, Lalancette, Ryan Stabler and Thomas Cook all battled for 2nd through 5th as they traded these spots for several laps even in lapped traffic. With 15 to go Pecore remained in front but Thomas Cook was on the move taking the 2nd spot using the outside lane on the speedway and began to run down the race leader. On lap 25 the yellow flew for debris bunching the field up for a restart. When the green flew Pecore again would take control while behind him Justin Lalancette made a great move to take 2nd over Cook, Stabler and Brianna Ladouceur. With 4 to go the final caution flew giving the field one last shot at Pecore for the win. When the green flew for the final time Shane Pecore was able to get away by 3 car lengths and despite a solid effort by the rest of the top 5 Shane Pecore had the fastest car as he cruised to his first win of the year and 4th ever series win over Justin Lalancette, Thomas Cook, Ryan Stabler and Brianna Ladouceur.

Brad Reif was the man to beat in the 15 lap Mod Lite feature and was looking to score his first ever feature but chasing him from 2nd was last week’s winner, and uncle Dan Reif, while Jeff May Kevin Foster and Scott Mere completed the top 5. Both Brad and Dan Reif were in a class of their own as they held a 3 second advantage over Jeff May who needed a caution in order to close the gap. His wish came true on lap 10 as the first of 4 late race yellows flew, one for debris and the final 2 for Dan Reif who lost control of his car on the front stretch ending his great run. On the final restart Jeff May was able to make the winning pass as he took over the lead and held it the rest of the way to score his first win of the season in only his 2nd start. Brad Reif crossed in 2nd with Kevin Foster, Ben Cartier and Scott Mere completing the top 5.

In Novice Sportsman Thomas Jock III was in a familiar spot as he held the lead at the drop of the green flag over last week’s winner Melvin Rush, Junior Delormier, Devon Guyette and Gregg Henry. Both Jock and Rush were the dominant cars and put on a show for the fans as they battled hard for the lead in the opening laps. Rush tried several times to get by on the top side but Jock remained up front and in control. At the halfway point Rush was tired of running 2nd as he took over the top spot leaving Thomas Jock III to battle with Junior Delormier for the 2nd spot. Even with a lap 10 caution Melvin Rush had the dominant car and charged away for his 2nd straight Novice Sportsman win of the year over Junior Delormier, Thomas Jock III, Devon Guyette and Brian McGinnley.


Richard Thorton had everyone’s number again in the caution free Bandit 10 lap event. Thorton took the lead on lap 2 and would lead the rest of the way in dominant fashion for the 5th time in 2017. Ryan Gay would cross in 2nd with Jesse Bender taking his brand new race car to the 3rd spot at the checkered flag.

Next week the TUSA Mod Lite Series will be on hand plus a full show in all classes with racing beginning at 7:30pm brought to you by Adirondack Power Sports.