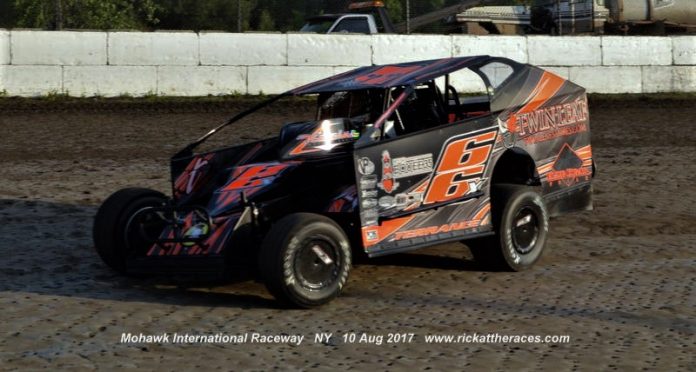 The 28th Memorial Cup had been rescheduled twice in 2017 and finally this past Thursday night this huge event, which was also the 2nd leg of the Unique Ecigs 358 Modified Series, became official and Carey Terrance was victorious for his 1st win of the year, Jamie Begor became the 7th different Sportsman winner, Junior Delormier swept the Novice Sportsman features, Richard Thorton did the same thing in the Bandit division while Kevin Foster scored win number 1 of the year in Mod Lite.

The 28th Memorial Cup got the green for 50 laps and Carey Terrance out ran Brian McDonald for the race lead into turn number 1 with Lance Willix, Chris Raabe and Corey Wheeler completing the top 5. After a season that has been filled with terrible luck, Terrance was dominant in the early stages of the event as he led by 10 car lengths while Willix, McDonald, Raabe and Wheeler were in a battle of their own for a top 5 spot. On lap 16 the first yellow flew as Chris Raabe slowed while running in 3rd Corey Wheeler also slowed with problems while running in the top 5. On the restart Terrance continued to lead but Luke Whitteker was on the charge as he moved from 6th to 3rd heading into turn 3 and on the charge for the top 2 drivers. At the halfway point Terrance had company as Whitteker was there to challenge but Terrance had a better race car and was able to hold off Whitteker as the laps clicked off. With 15 laps to go Terrance made his way into lapped traffic which brought Whitteker back in the picture with Tim Fuller giving chase from 3rd while McDonald and Willix completed the top 5. As the laps wound down Carey Terrance was caught in heavy traffic allowing Whitteker and Fuller to make it close and provide a great finish for the fans. On this night lapped cars would not be an issue as Carey Terrance put all the back luck behind him to score his 6th career Unique Ecigs 358 Modified Series win, his 1st of 2017 and 3rd career Memorial Cup win. Luke Whitteker would cross in 2nd with Tim Fuller completing the top 3.


The 25 lap Sportsman feature went green to checkered this past Thursday night as Styles Arquiett was the dominant force in the early going with Greg Snyder, Mike Stacey, Jamie Begor and Chris Frennier giving chase. Arquiett was well out in front of the field and showed no signs of slowing down while behind him Jamie Begor was on the move charging to the 2nd spot on lap 12 and was beginning to run down the leader. On lap 14 Arquiett’s great run came to an end as he spun in turn 4 and after a complete 360 would only lose 2 spots as Jamie Begor and Mike Stacey were able to get by. With 10 laps to go Begor began to enter lapped traffic which allowed Stacey to close the gap and try for his 2nd win of the season. With 5 to go Begor made a great move in traffic and was not to be denied on this night, as he finally scored his first career Mohawk Sportsman win becoming the 7th different win this season.

In Mod Lite action Brady Rookey was in control of the field in the opening 5 laps as Harley Brown, Kevin Foster, Brad Reif and Nick Mallette rounding out the top 5. Tim Reif would lose control of his race car in turn 3 and the caution flew for the first time. On the restart Harley Brown took the lead away from the top side while Kevin Foster followed him to 2nd with Rookey completing the top 3. Brown had a great car but Kevin Foster was on the charge as he took over the lead on lap 12 with Brown falling to 2nd. On the final lap heading into turn 3 Brown would charge into the turn on the high side. As the top 2 came to the line Brown cut the car hard left and drew alongside at the finish, but by 0.045 seconds Kevin Foster was able to score the win with Brown taking his best finish of the year crossing 2nd.

In the first of 2 Novice Sportsman feature events Junior Delormier led wire to wire in a caution free 15 lap affair claiming his 3rd win of the year. Thomas Jock III crossed in 2nd with Melvin Rush coming home 3rd at the line. In the night cap Kurt Russell was the driver to beat as he led early on but Junior Delormier was on the move to 2nd over Dana Francis, Thomas Jock III and Brian McGinnley. On lap 11 Delormier was able to get the lead away and would never look back as he scored his 2nd win of the night marking the first time in his career that he had won twice in a single evening. In victory lane Junior Delormier dedicated both of his wins to his late father.

Richard Thorton had a similar night but the first feature of the night from August 4th was the tough one as 2015 track champion Shane Ray would lead the way over Thorton and Ian Bresset. On lap 8 Thorton was able to take over the lead and would march on to his 6th win of the season over Ray and Bresset. In the night cap Thorton was not messing around as he led every lap and dominated yet again to score his 2nd win of the night and 7th of the year with Shane Ray crossing 2nd again while Zac Stone crossed in 3rd.

Next week regular Friday night racing will be set to take place with the Eastern Ontario Vintage Stock Car Club coming back to MIR plus a full program in the 358 Modifieds, Sportsman, Novice Sportsman and Bandit, the Mod Lite division has the night off. The green flag drops at 7:30pm.