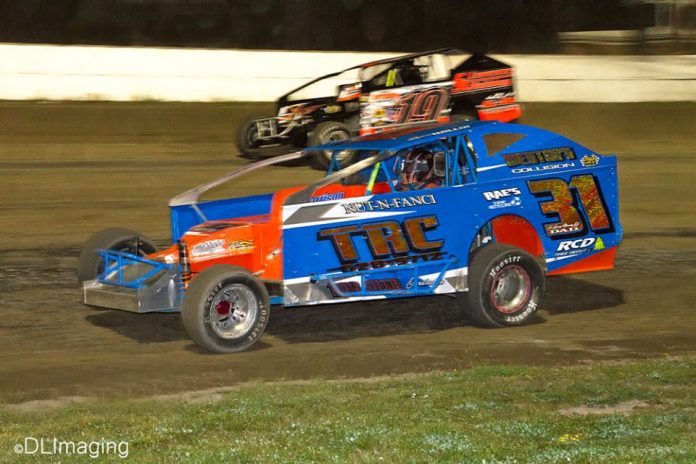 AKWESASNE, NY – Final points and chances to get to victory lane were all on the line this past Friday night at the Mohawk International Raceway. Lance Willix used his outside pole starting spot to charge to his first 358 Modified win of the year, Brent Kelsey became a first time winner in the 35 lap Sportsman event, Kevin Foster barely edged out Deric Ellsworth for his 3rd Mod Lite win in a row, Gregg Henry claimed win number 2 in Novice Sportsman and Shane Ray stopped the dominance of Richard Throton by claiming his first Bandit checkered flag of the year.

In the Unique Ecigs 358 Modified Series finale the green flag flew but the caution quickly flew as well for a multi-car crash on the front stretch. John Mulder broke his front end causing him to cross right in the path of Mike Maresca, Kyle Dingwall had no place to go and slammed hard into Maresca causing heavy damage to the rear end of his car. All drivers would walk away. When the green flew again Willix would take over the lead and put on a clinic in the opening laps with Ryan Arbuthnot, Danny Johnson, Billy Dunn and Tim Fuller giving chase. On lap 8 the caution would fly again as Mike Stacey would lose a left rear tire on his ride forcing him to the pits. When the green flew Willix took the lead again but Billy Dunn was doing everything in his power to hold on to the track championship as he took over the lead with Willix and Arbuthnot completing the top 3. With Dunn in front Tim Fuller knew he had to keep the 5 time titlist in his sights as he took over 4th from Danny Johnson and quickly charged after the top 3. Carey Terrance was also on the move but on lap 12 while going for 5th in turn 1, he lost control of his car doing a complete 360 spin. Terrance would keep it going and come from 20th to finish up 6th on the evening. On lap 14 Larry Welling Jr. slowed on the back stretch and the yellow flew again. On the restart Willix was shown something as he charged back by Billy Dunn and began to drive away from a quality field. With Willix in front the attention shifted to the track championship battle as Dunn remained in 2nd but Ryan Arbuthnot and Tim Fuller were right there with him. As the laps clicked off Lance Willix was the dominant car and was cruising to what was going to be an easy win. However on lap 36 the caution flew for Louie Jackson Jr. as he slowed in turn 2. This gave Arbuthnot, Dunn, Fuller and Danny Johnson 1 final shot at the win. When the green flew Lance Willix got a great restart and never looked back as he finally claimed his first ever Unique Ecigs 358 Modified Series win and first win of the year. Arbuthnot held of for 2nd with Tim Fuller crossing 3rd and claiming the 2017 track championship while Billy Dunn and Danny Johnson rounded out the top 5. Willix was quick to credit Morrison Performance, FOX Shocks and Fastline in victory lane, along with a dedication of his big win to his father who passed away in the off season.

In the Number 1 Speed Equipment Sportsman Series it was Brent Kelsey taking the lead from the pole with Joel Hargrave, Jamy Begor, Brad Winters and Ryan Stabler completing the top 5 early on. Kelsey had a great race car and was on the charge looking to score his first career win. Through the field the battle for the point title was on the line as Johnathon Ferguson came into the evening 33 points in front of Kelsey but he had to come from 28th on the grid. Brent Kelsey was clearly dominant in the opening portion of the event leading the opening 6 laps before Brian Hudson slowed off turn 2 bringing out the yellow. When the green flew Brent Kelsey continued to lead but Ryan Stabler made a big move from 5th to 2nd with Jamy Begor, Joel Hargrave and Zack Arquiett completing the top 5. Ferguson had made up some ground as well as he finally made his way to the top 10 by lap 17 and was on his way forward. With 10 laps remaining Brent Kelsey held nearly a 10 car length lead as Ryan Stabler and Joel Hargrave could do nothing but hope they could catch a late caution and have a shot at the win. That came on lap 26 as Tommy Jock Jr., Billy Cook and Gabriel Cyr tangled off turn 2 and the caution was out. On the restart Ryan Stabler and Joel Hargrave did all they could but Brent Kelsey was too strong, after many season of being so close everything went his way as Brent Kelsey would charge to his first ever Sportsman win. Ryan Stabler would cross in 2nd with Joel Hargrave, Zack Arquiett and Johnathon Ferguson completing the top 5. With his 5th place finish Ferguson would claim the 2017 Sportsman track title.

The drama would continue in the 20 lap Mod Lite feature as Nick Mallette held a 14 point lead over defending track champion Deric Ellsworth. When the green came out Dan Reif would take the top spot over Kevin Foster, Jason Premo, Nick Mallette and Harley Brown. Reif was strong in the early laps but Kevin Foster was on the charge. On lap 6 Foster would take command of the race with Dan Reif falling to 2nd while Nick Mallette completed the top 3 drivers. Deric Ellsworth was slowly making his way to the front as the race reached th halfway point. He took 3rd from his title rival Nick Mallette and was on the charge for the top 2. On lap 10 Dan Reif would spin his machine in turn 2 ending a fantastic run and a shot at the win. When the race restarted Kevin Foster continued to lead but Deric Ellsworth was on his back bumper while Nick Mallette continued to make consistent laps running in 3rd. On the final lap Ellsworth and Foster were battling hard for the win, as the top 2 came to the checkered flag Foster drifted up leaving the bottom open for Deric Ellsworth. They both drag raced to the line end nearly even at the checkered flag. Timing and scoring showed that by 0.024 seconds Kevin Foster would claim his 3rd win in a row over Deric Ellsworth and with a 3rd place finish Nick Mallette would be crowned the 2017 Mod Lite champion.


No points were on the line in Novice Sportsman but the big trophy was out there for all drivers and Dana Francis was looking to grab his first one ever with Gregg Henry and Thomas Jock III chasing him from 2nd and 3rd. Henry and Francis both were running the low lane which gave Jock the chance on the top side. On lap 8 TJ3 made his move going from 3rd to 1st down the back stretch with Dana Francis now 2nd while Gregg Henry, Melvin Rush and Brian McGinnley completed the top 5. As the laps clicked off Gregg Henry started to pick up the pace as he took 2nd from Francis and then ran down Thomas Jock III. On the final lap Henry used the bottom lane while Jock kept his car wound up on the top side. As they raced to the line Gregg Henry would get the pull of the bottom he needed as he marched on to score his 2nd win of the year by a car length over Thomas Jock III, Melvin Rush, Dana Francis and Brian McGinnley.

The Bandit division was already a lock as Richard Throton sealed up his 2nd straight title 1 week ago but was looking to extend his winning streak to 6 as the field went green for the 10 lap event. Shane Ray would take the lead early on over Richard Thorton and Matt Zira. After many weeks of struggling to get the new car perfect Shane Ray was in great form and would pull away from Richard Thorton and the rest of the field to finally score his first win of the season of Richard Thorton, Matt Zira, Mike Gaucher and CJ Lavair.

The Mohawk International Raceway will be off next week but will return in 2 weeks time for the annual Mohawk Nationals September 15th and 16th. Stay tuned to mohawkspeedway.com for ticket prices and starting times for both days.