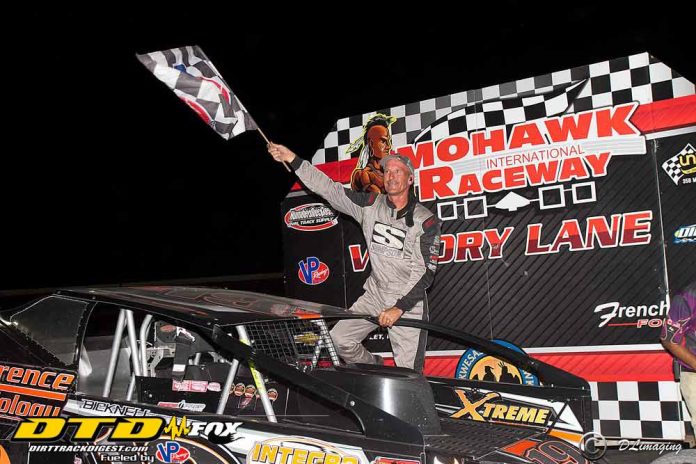 AKWESASNE, NY – Another hot night of racing action at the Mohawk International Raceway this past Friday night with all 5 classes on hand. SUNY Canton and the great races fans were treated to some great racing and the question remained, who could stop Tim Fuller and Chris Raabe.

The Twin Leaf Convenience 358 Modified division was set for 30 laps and the question would be answered on this night. Madison Mulder jumped into the early lead in the opening 3 laps but he had a very familiar person chasing him from the 2nd spot. Madison’s Father John Mulder wanted a piece of the action as he used the bottom lane to grab the lead off turn 4 on lap 4 as Chris Raabe, Brian McDonald and Tim Fuller completed the top 5. Raabe was lightning fast in the early going as he came from 10th to the top 3 and eventually took over the lead on lap 7 from John Mulder while Tim Fuller made a bid for the number 3 spot getting by Brian McDonald off turn 2. With Raabe in control and pulling away Fuller knew he had to keep him in striking distance and did just that by disposing of John Mulder for 2nd and set his sights on the leader. At the halfway point the big lead that Chris Raabe had was getting smaller as Fuller had the quicker of the 2 cars. On lap 18 Tim Fuller was able to use the bottom groove and take the top spot away over Raabe while Brian McDonald did all he could to chase down the leaders from 3rd. Over the final 10 laps Tim Fuller would march to a straight away lead and would not be denied as he evened the score between him and Chris Raabe taking his 4th win of the season. Raabe would cross in 2nd in the caution free event with Brian McDonald, John Mulder and Lance Willix completing the top 5.

Crossroads Tobacco Sportsman saw another solid field come to green for the start of the 25 laps event as Delbert Legrow Jr. took the top spot away at the drop of the green over Chris Frennier, Devin Willis Joel Hargrave and Brent Kelsey. His run at the top of the leader board would end just before the end of lap 5 as he slowed off the pace on the back stretch bringing out the first yellow on the night. This left Chris Frennier in control when the green flew on the next restart as Joel Hargrave moved to 2nd with Miguel Peterson, Devin Willis and Johnathon Ferguson completing the top 5 drivers. Frennier had clearly the fastest car on the speedway as he drove out to a commanding lead as Joel Hargrave was running a smooth and steady pace in 2nd with Miguel Peterson running the bottom lane into 3rd. The race track began to take rubber and this played into the advantage of Frennier as nobody was trying the top lane, but this made it equally as tough in traffic as the field approached lap 15. Frennier started to pick his spots to get buy the lapped cars which allow Hargrave and Peterson to close in. On lap 19 last week’s winner Andy Howard slowed with a flat right front tire on the back stretch and the caution flew again. On the final restart Frennier pulled out to a comfortable lead but Joel Hargrave got caught on the high lane allow Peterson, Ferguson, Ryan Stabler and Brent Kelsey to get buy and shuffle him out of a top 5 finish. In the end the wait was finally over as Chris Frennier scored his first ever Sportsman win after 3 years of trying at Mohawk. Miguel Peterson came home with a career best 2nd place effort with Johnathon Ferguson Ryan Stabler and Brent Kelsey completing the top 5.

In Novice Sportsman action Jason Rose dominated the opening 6 laps over Brian McGinnley Mike Phinney Cory McCoy and Kurt Russell. Rose had a great car through the opening laps and was looking to score his 3rd win of the 2018 season. Dale Gonyo brought out the yellow on lap 11 as he spun in turn 2 collecting Jonathan Rush in the process. On the restart Rose continued to stay strong in the top spot and McGinnley and Phinney completed the top 3 spots. On lap 12 Phinney spun his car in turn 2 while running in the 3rd spot and the caution flew once again. Under caution Jason Rose had a right front tire start to go soft on his race car but gave it a shot on the final restart. When the green flew Rose held the lead but the handling went away due to the flat tire allowing Brian McGinnley to get by for the lead. Over the final 3 laps Brian McGinnley held a steady wheel and would charge to the line for his first ever Novice Sportsman win Cory McCoy would move to 2nd with Kurt Russell completing the top 3.

In the Green’s Performance Mod Lite division Harley Brown was looking to end a lengthy winless drought that dated back to June 24th of 2016. Brendan Villnave took the lead in the opening laps of the 15 lap feature event. Vilnave had a fast car but Harley Brown was on the charge as he took the lead on lap 5. Brown started to pull away but behind him Villnave was in a battle with Styles Arquiett Dan Reif and Brad Reif for a top 5 spot. At the halfway point Brown remained in control of the field but Arquiett was closing quickly and looking to score his 2nd win in the last month. On lap 10 Dan Reif who was running in the top 5 spun his car bringing out the yellow. On the restart Brown pulled out to the lead but Styles Arquiett tried several times on the low lane to get by. Arquiett would pull even with Brown but couldn’t make it happen. On this night after back to back runner up finishes Harley Brown would end the lengthy winless drought as he scored his first win of 2018. Styles Arquiett crossed in 2nd while Nick Mallette would take 3rd at the checkers.

The Bandit division started off on a tough note for Shane Ray as he tangled with another competitor in turn 2 ending his night early. Jeff Trapp would take over the top spot in the early going over Mike Pecore and Nick Perham. Trapp joined the field late in the year and after a 2nd place run 1 week ago, was on the charge to take his first career win. Over the 10 lap feature Jeff Trapp had a dominant car and without the aid of a yellow nobody was catching the leader as Jeff Trapp took his first ever Bandit win at MIR in 2018. RJ Tressider would make a late race charge to grab his 4th runner up finish on the season with Nick Perham taking the final podium spot at the checkers.

Next week the 2nd leg of the 5 race Unique Ecigs Sportsman Series gets underway. The top stars at Airborne Park Speedway in the Sportsman division will be on hand to challenge our Mohawk regulars in a 50 lap event as part of our Crossroads Tobacco Sportsman Division. The Twin Leaf Convenience 358 Modifieds Green’s Performance Mod Lite Novice Sportsman and Bandit will all be on the card. The green flag drops at 7:30pm.