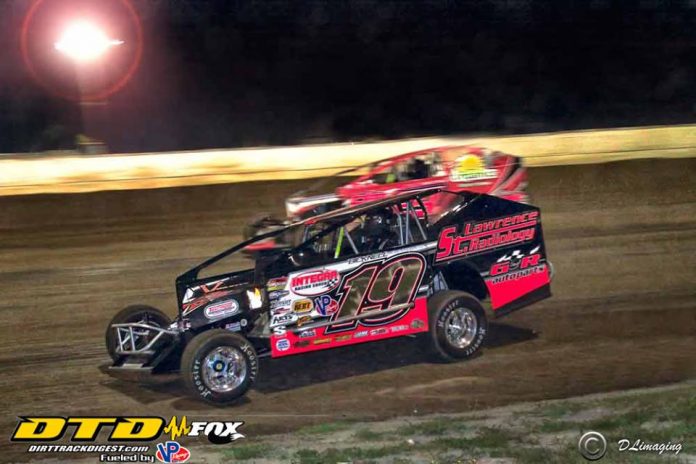 AKWESASNE, NY – White’s Plumbing and the fans were treated to a great night of racing in all 5 divisions this past Friday night at the Mohawk International Raceway. With hot temperatures it made the racing surface fast and drivers had their hands full but showcased what they could do with their racing machines.

It’s been 10 weeks in the Twin Leaf Convenience 358 Modifieds and so far only Tim Fuller and Chris Raabe have been the drivers in victory lane. Jeff Sykes was looking to break that streak as he took the lead at the start of the 30 lap feature over Lance Willix, Brian McDonald, Matt Woodruff and Tim Fuller. On a track that was extremely fast the top lane was the place to be and Sykes began to draw away from a solid field building up a half straight away lead by lap 10 at the battle ensued behind him. Lance Willix and Brian McDonald had a spirited battle for 2nd but Tim Fuller was closing in to make it a 3 car battle for position. Fuller would charge forward and take 3rd from McDonald then go after Willix for 2nd. He would take it away in turn 2 as Willix pulled a cross over move to try and get it back. Heading into turn 3 Willix and Fuller made slight contact forcing Willix around in turn 3 bringing out the yellow. Willix would re-fire the car and come back for a 7th place finish. On the restart it was a battle of cousins up front as Jeff Sykes took the lead but Tim Fuller proved to be too much as he took over the lead in turn 2 and charged away from the field. Carey Terrance was making a late race charge and used the restart to take 3rd from McDonald and eventually run down Sykes for 2nd. On lap 19 Terrance took over the number 2 spot but had a ways to go to catch Fuller. With 10 to go it was Tim Fuller, Carey Terrance, Jeff Sykes, Chris Raabe and Brian McDonald making up the top 5 and the battle was on. On lap 22 Ryan McLean spun on the front stretch bringing out the final caution. On the restart Terrance tried at will to stay with Fuller but he proved to be too strong as he drove away once again. Over the final laps Fuller hit his marks and would once again grace victory lane for a 7th time and 4th week in a row at Mohawk. Terrance claimed his 2nd runner up finish of the year, Chris Raabe ran solid all night taking the 3rd spot over Jeff Sykes who had his best run of the year in 4th with Louis Jackson Jr., completing the top 5.

In Crossroads Tobacco Sportsman action Mike Trapp was looking to keep the trophies coming back to Edwards New York as he took the lead at the drop of the green flag in the 25 lap contest over Devin Willis, Mike Stacey, Brianna Ladouceur and Delbert Legrow. Trapp was fast early on and looked to have the car to beat as he put a half straight away on the field by lap 8 leaving the rest of the field searching to find the right groove. On lap 9 the yellow flew as Delbert Legrow Jr., Spun in turn 2 bringing out the yellow. When the green flew it was Trapp back in front but Mike Stacey had something for him as he drove by on the top lane to take over the lead with Robert Delormier making a big move for 2nd over Trapp Miguel Peterson and Ladouceur. Stacey began to open up the lead but the caution would fly at the halfway point of the event as Devin Willis spun in turn 1. he would get the car going and charge to 9th at the checkers. The next restart is where things got scary as coming off turn 4 to the green Mike Stacey was clipped by another car forcing him sideways which sent the field scattering along with Robert Delormier and Miguel Peterson hard into the front stretch wall. Cedric Gauvreau had no place to go and clipped Peterson’s car causing heavy right side damage. The race went under red, all drivers were able to climb from their cars without a scratch. When the race resumed somehow Mike Stacey was able to regain control and not lose the lead as he took the top spot again over Brianna Ladouceur, Ryan Stabler, Zack Arquiett and Thomas Cook. As the laps clicked off Stacey’s lead grew to 10 car lengths and it appeared victory was in store after last week’s heartbreak. On lap 19 the yellow would fly for the final time as Tommy Jock Jr., slowed to a stop in turn 2. On the final restart it was no contest as Mike Stacey pulled away over Ladouceur and Stabler. After a heartbreaking 2nd place run last week, it was victory lane this week for Mike Stacey as he claimed his first win of the season and first since July 21st of last year. Brianna Ladouceur, Ryan Stabler, Zack Arquiett and Thomas Cook would complete the top 5.

The Mod Lites always put o a show and on this night it was no different as it was a battle between Dan Reif Styles Arquiett and Brad Reif in the opening laps. All 3 teammates put on a great show for the fans but drivers like Harley Brown and Scott Waldriff who was making his first appearance at Mohawk in 2 years were also in the hunt for the win as a 5 car battle for the top spot began. On lap 7 Dan Reif started to take control of the race putting 5 car lengths between himself and Styles Arquiett who was having his battle with Harley Brow for the runner up position. With 5 to go Dan Reif appeared to be well on his way to his 4th win of the year but the caution would come out on lap 11 for Alexia Roux who spun in the 2nd turn. Under the same caution Kevin Foster also slowed to a stop in turn 2 and had to be towed back to the pits. On the restart Styles Arquiett and Harley Brown did everything they could do to try and catch Dan Reif but it was not to be. Reif would drive away to hisz division leading 4th win of 2018 with HArley Brown taking 2nd at the line over Arquiett Scott Waldriff and defending track champion Nick Mallette.


In Novice Sportsman Jonathan Rush took the lead at the start of the 15 lap event over Dale Gonyo, Joshua Pete, Josh Laware and Brian McGinnley. Rush would lead thre opening 3 laps before the caution flew for Tyler Atkins and Eugene Tarbell as the came into contact with the turn 3 wall. Atkins was able to pull away but Tarbell was towed pit side. When the green flew Rush took the lead but it was short lived as Dale Gonyo powered away on the top lane to take the lead and begin to put on a driving clinic. On lap 6 Kurt Russell clipped an infield tire in turn 3 breaking the left front off his car bringing out the 2nd caution of the night. When the green returned it was Gonyo in front over Rush, Laware, McGinnley and Lee Barcomb now 5th. Over the remaining laps it was no contest at the head of the field as Dale Gonyo proved to be too much for everyone on this night. At just 14 years of age Dale Gonyo would take the legendary family name back to victory lane for the first time in many years. Jonathan Rush had his best ever finish of 2nd on this night. With Josh Laware, Brian McGinnley and Lee Barcomb making up the top 5.

The Bandit division closed out the night at Terry Green Jr. who was debuting a brand new car took the lead at the drop of the green flag over Francis White and Matt Zira who was making his first start of the year on his father’s birthday. Green had a great car and led the opening 5 laps but Matt Zira, who started in the 8th spot would take over the lead after a spirited battle with drivers in the top 5 which included Green, Francis White, points leader RJ Tressider and Mike Pecore. Once in front it was noc contest as Zira would drive away putting 8 car lengths on the battle for 2nd between White and Tressider. At the finish Matt Zira put his brand new race car in the winner’s circle after a few years away from the track. Francis White would cross in 2nd with RJ Tressider, Terry Green Jr. and Shane Ray competing the top 5.

Next week racing action switches to Thursday night as the 5th annual Pete Mitchell Memorial will hit the speedway for 100 laps in the Crossroads Tobacco Sportsman division. Johnathon Ferguson won last year’s race and will look to do it again. Also on the card will be the DirtCar 358 Modified North Regional Series event. With $4000 on the line and the race being on a Thursday night we could see some outside invaders try to spoil the party but the track regulars will be up to the task and looking for victory. The Mod Lite division will also be on the card, racing action begins at the normal 7:30 start time.