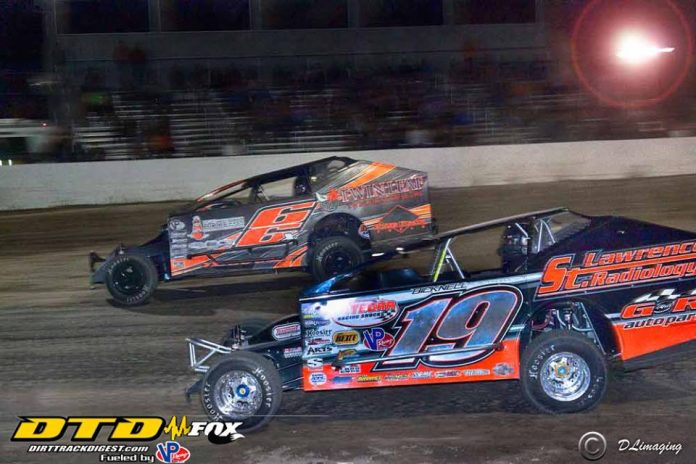 AKWESASNE, NY – A packed house and a full pit area saw all 5 divisions at the Mohawk International Raceway plus the return of the Quebec Lighting Sprints for their finale of the 417 Bus Lines Series with East End Convenience on hand.

The Twin Leaf Convenience 358 Modifieds were set to go for 30 laps of racing and the one major question was, could anyone stop Tim Fuller in his bid for 5 in a row and 8 wins on the year. Lee Ladouceur jumped to the front early on over Matt Woodruff and Brian McDonald and looked to have the fastest car out there as he opened up a 5 car length lead. Ladouceur would lead the opening 8 laps as Lance willix and 8th place starter Fuller were on the charge and making a run at the leader. On lap 11 Tim Fuller made his move through the middle of the track off turn 4 to go to 2nd and quickly pull even with Ladouceur off turn 2. On lap 12 Tim Fuller had the lead and began to pull away with Willix moving to 2nd over Ladouceur, Carey Terrance and Chris Raabe. After a quick start to the year Chris Raabe as looking for something good to happen as he ran in the top 5 all night and had a great battle going with Louie Jackson Jr. On lap 17 the 2 drivers sailed into turn 1 and made significant contact sending him and Jackson airborne and off the speedway in turn 1 and the yellow lights came on. Both drivers were ok but suffered too much damage to continue. This set up a key restart as Carey Terrance had been on the move to the front and looked to have something for Fuller. When the green flew it was Fuller to the lead but Carey Terrance was looking low and high to try and take over. On lap 23 Terrance would move by Fuller on the extreme outside lane to grab the lead as the top 2 raced hard in the closing laps. On lap 25 Preston Forbes spun and the yellow flag flew. On the final restart Terrance stayed committed to the high lane and that proved to be fast lane as Carey Terrance added his name to the list of 358 Modified winners at Mohawk in 2018 by claiming his first win of the season. Tim Fuller scored his first runner up finish of the year over Lance Willix, Brian McDonald and Lee Ladouceur.

The final regular points night for the Crossroads Tobacco Sportsman division was set to go and Brianna Ladouceur, Johnathon Ferguson and Ryan Stabler were ready to settle it amongst themselves. In the early laps it was Robert Delormier taking control and pulling away early on over Miguel Peterson, Thomas Cook, Jamy Begor and Andy Howard. Delormier had without question the fastest car in the early laps as he raced out to a near straight away lead by lap 9 of the 25 lap event and showed no signs of letting up. Behind him Johnathon Ferguson and Ryan Stabler were doing all they could to at least stay in front of Ladouceur in the battle for the track title but Ladouceur did what she needed to do, stay out of trouble and keep Stabler and Ferguson in sight. At the front on lap 13 Miguel Peterson was closing quickly but a Dustin Bradley spin in turn 1 and 2 set up a key restart for Peterson. When the green flew Peterson jumped into the outside lane and put all the pressure on Delormier as Thomas Cook, Johnathon Ferguson and Zack Arquiett battled it out in the top 5. On lap 17 Miguel Peterson took over the top spot from Delormier and attempted to drive away. On lap 19 that all changed as Junior Delormier had a flat tire in turn 2 and the yellow came out. On the restart Delormier was able to get back by Peterson but the Long Sault Ontario native was not backing down. On lap 22 Peterson used the extreme outside lane again to get by for the lead. From there Miguel Peterson put the car on auto pilot, made 3 more perfect laps and finally got the monkey off his back with an emotional first career Sportsman win after several seasons of trying. Cedric Gauvreau made a big time charge to the front taking 2nd over Robert Delormier while Thomas Cook came across 4th and Brianna Ladouceur bested her title rivals with a 5th place finish. With that run Ladouceur just needs to show up next week to become the first ever female to win the coveted Sportsman track championship.

In Novice Sportsman Tyler Atkins grabbed the lead at the start of the 15 lap event over Lee Barcomb and Xavier Perrin. With Atkins pulling away Lee Barcomb was doing all he could to run down the leader but on lap 2 Barcomb went off the speedway ending his great run bringing out the yellow. On the restart it was once again Atkins in control but Xavier Perrin who was in a bid for his 2nd win of the season was closing the gap while Dale Gonyo, who was gunning for his 2nd win of the year charged to the top 3 by lap 4. As the laps clicked off Tyler Atkins kept getting faster as Gonyo and Perrin both tried to keep pace. Without a caution in the final laps Tyler Atkins stayed smooth at the front of the pack and scored his first ever Novice Sportsman win. Dale Gonyo crossed in 2nd with Xavier Perrin Brian McGinnley and Josh Laware completing the top 5.

In Bandit action it was a wild start as a 3 car pileup took place in turn 3 and 4 resulting in a quick yellow. Points leader RJ Tressider took a big hit as he broke the rear end on his ride ending his night early giving an opportunity for his title rivals to close the gap. When the race went back to green Terry Green Jr. assumed control of the race over Shane Ray and Nick Perham. The top 2 had a spirited battle for a heat win earlier in the night which continued on in the 10 lap feature. Both Green and Ray put on a great side by side battle as Perham, new comer Mitchell Regan and Terry Lamica completed the top 5. On the final lap the top 2 ran door to door with neither driver backing down. After Shane Ray took the heat win in a near photo finish earlier in the night it was Terry Green Jr. returning the favor, this time to score his first ever Bandit feature win at Mohawk by inches. Shane Ray settled for 2nd with Nick Perham, Mitchell Regan and Terry Lamica completing the top 5.

A special 20 lap Mod Lite Canada/USA Challenge event took place and track points leader Dan Reif took control of the race over Harley Brown, Deric Ellsworth, Jeff May and Styles Arquiett. By lap 5 Brown had his moving quickly as he got by Reif on the front stretch to take over the top spot over Reif as Jeff May moved to 3rd. On lap 5 Michael Dion spun in turn 2, then just after that Colby Fregoe had a motor expire in turn 1. When the green came back out Brown continued his great run but Jeff May wanted a try at the front of the pack as he took the lead away after a great battle with Brown on lap 9. Once in front May did what he usually does and that’s drive away from a quality field leaving Harley Brown to battle with Deric Ellsworth for 2nd. With 7 laps remaining Dan Reif suffered a big hit in the points as he broke while running 5th and headed to the pits. He would be credited with a 16th place finish. With May well out in front Deric Ellsworth went to work as he and Harley Brown put on a great show for 2nd with Ellsworth getting the upper hand with 4 laps to go. Despite a late caution on lap 19 setting up a green, white, checkered finish, Jeff May would drive away from the field and score his 2nd win in as many starts at Mohawk. Deric Ellsworth held on for 2nd over Harley Brown who gained several points on Dan Reif with a 3rd place finish with Styles Arquiett and Allyson Prince crossing in 5th.

The Quebec Lightning Sprints were making just their 2nd appearance in 2018 and were also looking to decide a champion in the 417 Bus Lines Series. Eric Sundborg came in as the series points leader and got the lead at the drop of the green over Jordan Poirier, Yann Savard, Yannick Poirier and Stephane St. Laurent. With a fast race track it didn’t take long for the Lightning Sprints to get spaced out and Sundbprg who is a 2 time Lightning Sprint champion, drove away from some quality cars but Jordan Poirier was on the charge and looking to close in. on lap 13 the field started to enter into traffic which played right into the hands of Poirier as he closed in on the veteran Eric Sundborg and the battle was on. On lap 18 Benoit Lafleur loast a motor in turn 4 bringing out the yellow. On the final restart Eric Sundborg was able to play it perfectly as he drove away to score the win and the 417 Bus Lines Series title. Jordan Poirier held on for 2nd over June winner Mathieu Bardier, Yann Savard and Yannick Poirier.

Next week its final points for all divisions including the final night of the MIR 358 Modified Series, Chris Raabe has won both of the opening events and will look to make it a clean sweep. Also in town the Unique Ecigs Sportsman Series will take to the Speedway for round 4 and as mentioned, Brianna Ladouceur just needs to walk through the gates at the Mohawk International Raceway to be crowned the Crossroads Tobacco Sportsman Champion. It’s a close battle in Mod Lite and Bandit as well and racing will be intense with the first green flag dropping at 7:30pm. 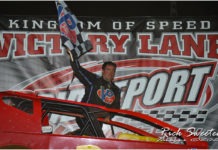