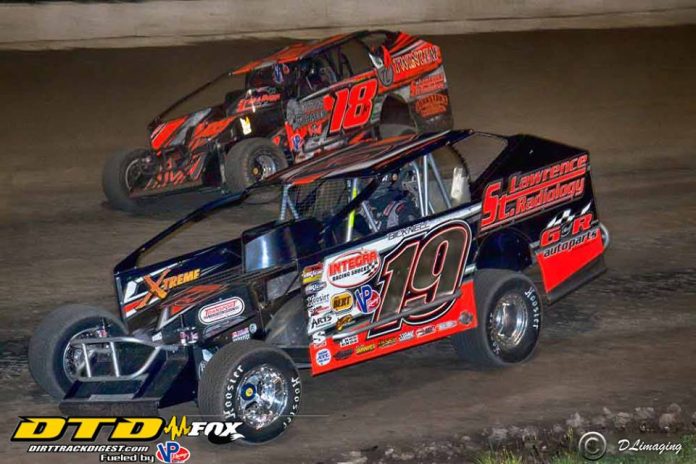 AKWASANE, NY – It was the time of year everyone likes to see and doesn’t like to see as the curtain came down on the 2018 regular season of racing at the Mohawk International Raceway this past Friday Night. Frenchie’s Chevrolet and Frenchie’s Ford were on hand for the Final in the MIR 358 Modified Series plus round 4 of the Unique Ecigs Sportsman Series. Track titles were also up for grabs and a fast race track made for some exciting racing.

Following a redraw that took place earlier in the night 2 long time Cornwall natives Corey Wheeler and Brian McDonald led the field to the green with McDonald getting the early advantage into turn 1 over Wheeler, John Mulder, Lee Ladouceur and Carey Terrance. It had been nearly 2 full seasons since McDonald last went to victory lane and he was running hard in the early stages of the 50 lapper and looking to find victory lane. Behind the leader last week’s winner Carey Terrance was on the move as he made his way to the top 3 early by lap 10 getting by both Ladouceur and John Mulder and was on his way to try and catch the top 2 drivers. Lance Willix experienced problems in turn 2 brining out the first caution. When the green returned the man they call “Slim” also returned to the top spot with Ladouceur, Terrance and Tim Fuller making a big move from 7th to 4th while Corey Wheeler stayed close by in the 5th spot. Lee Ladouceur had a fast race car nearing the halfway point and was able to take to the inside lane and get by McDonald for the lead and along the way brought Tim Fuller with him to the number 2 spot, and the battle was on. By lap 24 Fuller had caught Ladouceur and was all over the Alexandria native looking for the top spot. On lap 25 Fuller made the move that counted as he took over the lead and began to put on one of the most dominant runs in recent memory at MIR as he worked traffic to perfection. With 10 laps to go Fuller had lapped nearly the entire field as only Lee Ladouceur and Brian McDonald remained on the same lap as the race leader. With 5 to go McDonald was in danger of going down a lap but was able to sneak away in traffic. In the end it was all Tim Fuller as he made history taking the MIR 358 Modified Series win, the 2018 track title and tied the all time single season win total held since 1992 by Pat O’Brien, with his 8th win of the season. Ladouceur held on for 2nd with McDonald 3rd while Louie Jackson Jr. and Jeff Sykes completed the top 5.


Brent Kelsey too over the top spot at the drop of the green to start round 4 of the Unique Ecigs Sportsman Series over Codie Aubin, Jason Rose, Shaun Shaw and Robert Delormier. With a fast race track due to a brief intermission shower that delayed the start of this 50 lap event, Kelsey was able to use all the power under the hood to drive out to a commanding lead in the early laps. On lap 5 Billy Cook and Andy Heywood tangled in turn 4 bringing out the caution. Both drivers were able to continue. On the restart it was once again Kelsey in front with Robert Delormier taking over the number 2 spot from Jason Rose with Moise Page and 7th place starter and 2018 track champion Brianna Ladouceur moving to 5th. Kelsey had clearly the fastest car on the race track but by lap 17 had entered into lapped traffic which would change the momentum of this race. Ladouceur however was on the charge and looking to cap off a title year with a feature win as she charged to 2nd getting by Robert Delormier and then set sail after Brent Kelsey. On lap 35 Kelsey was caught behind some lapped cars which allowed for Ladouceur to narrow the gap considerably. On lap 37 Ladouceur made the move for the lead and took it for good on the bottom of the speedway over Kelsey, Shaun Shaw, Moise Page and 13th place starter and series points leader Shane Pecore completing the top 5. A remarkable 2018 season was capped off in fine style as Brianna Ladouceur would go unchallenged to claim her 4th win of the season and the 2018 Sportsman title becoming the first female driver to claim the title in the Crossroads Tobacco Sportsman division. Brent Kelsey turned in a solid 2nd place effort with Shaun Shaw coming home 3rd over Moise Page and Shane Pecore padded his points lead with a 5th place finish.

The action was just as intense in the Mod Lite division as only 13 points separated points leader Dan Reif from 2nd place Harley Brown in the chase for the title. Both drivers would start 6th and 7th respectively. When the green flag flew at the start of the 15 lap event Kevin Foster who took some time getting a brand new car together, made it pay off as he took the lead early on over Stewart Mossow, Dan Reif, Nick Mallette and Brad Reif. With this new car Foster had everyone covered in the early going but both title contenders Reif and Brown were on the charge to the front as they were looking to not only close out the track title but also the final regular season win of the year. At the halfway point Foster continued to lead but Dan Reif was on the charge as he moved to 2nd with Harley Brown making a big move on the top side of turn 4 to take over the 3rd spot. With 5 laps to go Kevin Foster was starting to feel the pressure from Dan Reif who was using every inch of the speedway to try and catch the leader. After putting the new car track a few weeks ago Kevin Foster’s hard work would pay off as he scored his first win of the season with Dan Reif taking 2nd and with that, the 2018 Mod Lite track title. Harley Brown settled for 3rd with Nick Mallette and Scott Waldriff rounding out the top 5.

RJ Tressider was looking to make his rookie season a memorable one as he held a 17 point lead in the chase for his first title over another Bandit rookie Nick Perham. When the green flew it was Jeff Putnam taking the lead early on over Francis White, Nick Perham, Gary Sharlow and Ian Bressett. The lead for Putnam however was short lived as Francis White used the inside lane on lap 5 to take over the lead and put on a dominating performance. Behind the leader Nick Perham was doing all he could to hold on to a top 5 run as RJ Tressider was stuck in traffic but soon realized it was time to go. By lap 7 Tressider had worked his way to the 5th spot and was working on Jeff Putnam for 4th with Gary Sharlow in front of them in 3rd. Francis White was clearly dominant as he went unmatched to score his 2nd win in 4 starts in 2018 at Mohawk. Nick Perham would claim a 2nd place effort with Gary Sharlow rounding out the top 3. Despite a hard fought 2nd place run RJ Tressider would come home 4th and claim the 2018 Bandit track title in the same car that had won the last 2 titles in a row with Richard Thornton behind the wheel.

It was all about the feature win in the Novice Sportsman ranks as long time Bandit driver Corey Castell took the lead at the drop of the green flag over Lee Barcomb and Jonathan Rush. Castell had taken a few weeks to get the bugs worked out but clearly had a great car as he held the lead for the opening 6 laps. At that time Jonathan Rush wanted a turn up front as he took over the lead with Castell and the ever consistent Brian McGinnley holding on to 3rd. As the laps began to click off and the checkered flag in sight, Dale Gonyo stepped it up one ore notch as he took 2nd from McGinnley and started to run down the race leader. On the final lap Jonathan Rush kept the wheel steady and made one final clean lap to march on and finally score his first ever Novice Sportsman win of the 2018 campaign. Dale Gonyo was close at the finish in 2nd over Brian McGinnley, Gavin Riddell and Okwari White.

The 2018 regular season has been an amazing one as always with plenty of action and drama along the way. However the entire season is not complete as the Mohawk Nationals Weekend is on the horizon September 14th and 15th with plenty of racing action over 2 days to hold you over until the start of the 2019 season. Very affordable prices for 2 day pit and general admission are available along with single day passes as well. Check out mohawkintlraceway.com or the track Facebook and Twitter pages for more information.