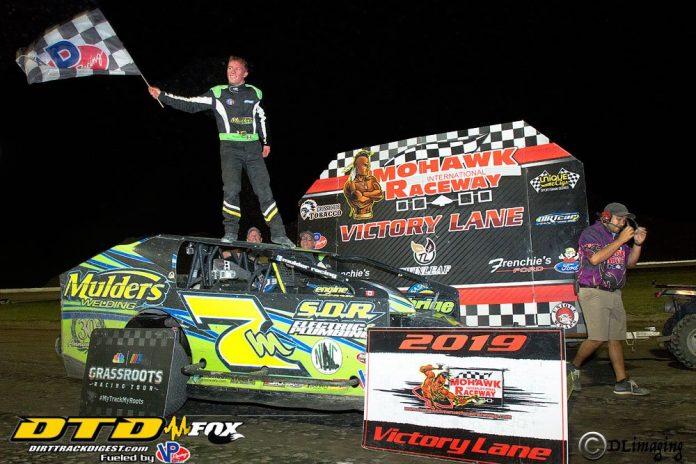 AKWESASNE, NY – The final race in the month of July was a warm one this past Friday night at the Mohawk International Raceway with Lazore’s Construction on hand. With only a few points paying shows left drivers are still searching for victory lane while some were making their return to the winner’s circle after a lengthy absence.

The Crossroads Tobacco Sportsman were the highlight of the evening as round number two of the MIR Sportsman Series took place. After a pair of yellows started off the event, Thomas Cook would lead early on over Brianna Ladouceur, Andy Howard, Zach Arquiett and Tyler Reynolds. It didn’t take long for the defending track champion to make a run for the lead and that’s exactly what Ladouceur did on lap 5, taking over the position from Cook, with Zach Arquiett, Shane Pecore and Andy Howard rounding out the top 5. As Ladouceur began to stretch out the lead Cook had his own battle going on as he tried to hold back Arquiett and Pecore over the next 11 laps. On lap 15 the yellow flew for Eric Gauvreau who went off the track in turns one and two. When the green flew Ladouceur continued her dominant run but Shane Pecore started to make a move as he got by Arquiett for third and then went after Cook for 2nd. On lap 21 Pecore finally got the number two spot away but had plenty of ground to make up on the race leader. On lap 23 the caution Brianna Ladouceur did not want to see came out for a slowing Gavin Riddell. On the restart Ladouceur held the lead over Pecore and Cook. With 10 to go Pecore closed in and made a big move from the outside lane in turn three then switched to the bottom off turn four and took over the lead leaving Ladouceur a car length behind in 2nd with Thomas Cook battling Robert Delormier for third. Over the final laps Shane Pecore would go unchallenged as he held a straightaway lead at the checkered flag for his third win of 2019 and sixth career MIR Sportsman Series win. Brianna Ladouceur would hold on for a strong runner up finish over Robert Delormier, Thomas Cook and Ben Wheeler.

The 30 lap Twin Leaf Stores 358 Modified feature saw Preston Forbes lead the field and dominate the opening laps over Madison Mulder, Carey Terrance, Louie Jackson Jr. and Lance Willix. With a fast race track at the beginning Forbes used it to his advantage as he pulled away but Madison Mulder was up on the wheel and looking to run down the leader. He would do just that on lap 14 as he closed in on Forbes, who appeared to lose the handling slightly. At the halfway point Mulder would use the inside lane down the back stretch and take over the top spot with Forbes now 2nd over Terrance, Michael Maresca and Louie Jackson Jr. Once in front Mulder was making it look rather easy as he drove out to a straight away lead leaving the top 5 to battle amongst themselves. Carey Terrance and Michael Maresca had a great battle for 2nd as they traded the spot several times in the final laps. In the end, without the help of a yellow flag Madison Mulder was not to be denied as he raced on to his 2nd Twin Leaf Stores 358 Modified win of the season over Carey Terrance, Michael Maresca, Preston Forbes and Chris Raabe.

Kevin Foster has been dominant in the Mod Lite division in 2019 but the only thing that was lacking was more feature wins. After an opening day win and 5 straight runner-up finishes, he would lead early on over Nick Mallette, Scott Sharpe, Harley Brown and Ian Bressett. As the laps clicked off quickly in the first half of the race Ian Bressett started to charge forward as he rocketed to 2nd on lap 5 and began to run down the leader. On lap 7 Nick Mallette’s great run ended with a broken front end in turns one and two. When the green flew Foster remained in control but Ian Bressett was there to challenge and made it tough on the current high point man. Over the final laps it was a battle for the lead while Scott Sharpe, Matt Fregoe and Harley Brown had their own war for positions inside the top 5. On the final lap Ian Bressett started to get closer but Kevin Foster was tired of running 2nd and would hold off the repeated challenges to collect his 2nd win of the year in Mod Lite. Ian Bressett had a career best 2nd place run over Scott Sharpe, Matt Fregoe and Harley Brown.

The Novice Sportsman saw a dominant performance through the entire race but only to have a major turn of events following the checkered flag. Deric Ellsworth would lead the opening laps of the event with Matthew Boury, Dan Bechard, Gage Howard and Dan Reif completing the top 5. The former Mod Lite champion was very fast during the race with only cautions slowing his pace. The first one flew on lap 7 for Lee Barcomb as he slowed in turn two on lap 7. On lap 8 Dan Reif and Mark Fewster came together which brought out the caution. Both drivers were able to continue on. When the green flew again Ellsworth remained in control over Dan Bechard, Chris Reaves, Joshua Pete and Matthew Boury. As the laps clicked off Deric Ellsworth was not to be denied as he came across as the first driver across the line and had seemingly locked up his 2nd win of the year. During post-race weigh ins, Ellsworth’s car did not meet the required weight which gave the win to a surprised Dan Bechard moving Chris Reaves to 2nd and Dan Reif would overcome all the early race misfortunes to come home with the final podium spot.

In the 10 lap Bandit feature, two-time winner Francis White would lead early on but Matt Zira, who was looking for his 5th straight win was all over the leader and determined to get by. On lap 6 Zira would make it look easy, using the top side to his advantage taking over the lead with Francis White, Terry Green Jr., Jeff Putnam and Terry Lamica. Once in front it was no contest as Matt Zira would open up the lead to a full straight away advantage leaving the rest of the field in his dust. Matt Zira would continue his great run collecting his 5th straight Bandit checkered flag of the year with Francis White and Jeff Putnam completing the top three spots.

Next week a full program will be on the card with Snap-On Tools on board as the evenings sponsor. Twin Leaf Stores 358 Modified, Crossroads Tobacco Sportsman Mod Lite, Novice Sportsman and Bandit will all be ready for action. The first green flag set to drop at 7:30pm. Reminder to all Canadian race fans that Canadian Money will be accepted at par at the main gate all season long. Also do not forget to grab a receipt at the toll booth in exchange for a free bridge pass that night.

For the latest news, results and points and everything happening at the speedway, be sure to check out our website at mohawkintlraceway.com. For even more news be sure to follow our Facebook and Twitter pages.