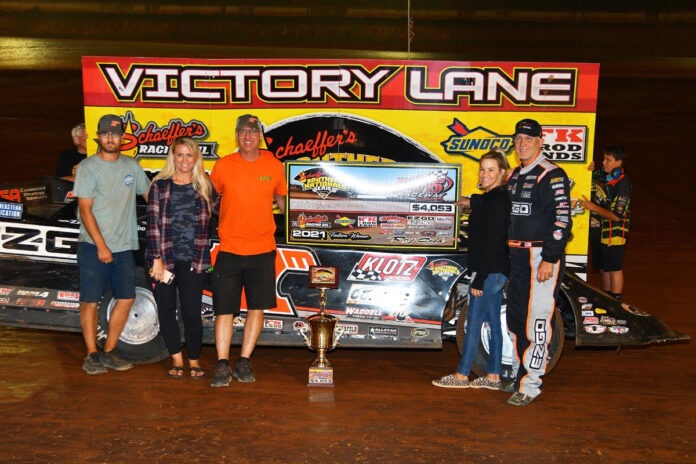 SWEETWATER, TN – For the sixth time in his Hall of Fame career, Dale McDowell celebrated in Schaeffer’s Oil Southern Nationals Series victory lane tonight, July 20 at I-75 Raceway in Sweetwater, Tennessee! Dale, who clicked off the second fastest lap in Group B during the qualifying session, rolled off from the outside of the second row in the 40-lap main event. The Chickamauga, Georgia star then ran in the third spot early in the contest before moving up to second and hounding race long leader Cody Overton for the point. Dale swept by Overton’s #2 machine on the eighteenth circuit and led the remainder of the distance to pocket the $4,053 top prize.

Tenth-starting Ryan King, of Seymour, Tennessee, was on the move throughout the race and eventually drove past eight competitors to land in the runner-up position – 1.881 seconds behind McDowell’s #17m mount. New Schaeffer’s Oil Southern Nationals Series point leader Jensen Ford picked off six cars to round out the podium in third. Local favorite and defending race winner Cory Hedgecock rallied past eight racecars to finish fourth, while Cleveland, Tennessee driver John Ownbey slipped back two spots to finish fifth. Leading Dirt Draft Rookie of the Year candidate Cody Overton, who paced the field for the first seventeen laps from the pole, wound up credited with a sixth place effort.

“It feels awfully good,” quoted McDowell following his second overall win of the 2021 campaign. “It was a good night for the E-Z-GO hot rod. We were here (for the Spring Nationals race in April) and led for a little bit – then that guy by the name of Brandon Overton got by us and we fell back to third. I was able to move around the racetrack and it was awfully good. Hats off to everyone that prepped the racing surface… it was a good night for us!”

Round four of the Schaeffer’s Oil Southern Nationals Series drew a 27 car field to I-75 Raceway for the $4,053 to win special event. David Crabtree earned Fast Time honors overall during FK Rod Ends time trials with his quick lap of 14.377 seconds around the newly-reconfigured 3/8-mile oval. Stacy Boles and Cory Hedgecock were victorious in the pair of consolation races. Ahnna Parkhurst and Andy Standridge both relied on series provisionals to gain access into the 40-lap feature, while Jeff Neubert utilized an emergency provisional to start shotgun on the field.

Following a scheduled day off on Wednesday, the cars and stars racing with the Schaeffer’s Oil Southern Nationals Series will roll into West Georgia Speedway on Thursday, July 22. Not only will the Whitesburg, Georgia facility play host to a Southern Nationals show for the first time, but Thursday’s stop to WGS will mark the first-ever sanctioned Super Late Model race in track history. Round five of the miniseries will boast a $4,053 first place prize, while each feature starter is guaranteed at least $400 just to start the 40-lapper. Additional information can be found online by clicking on www.wgsracing.com.