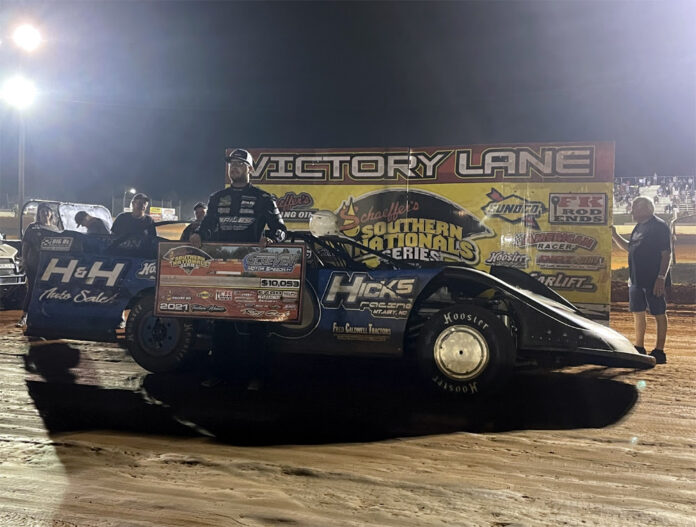 SYLVANIA, GA – Ross Bailes, of Clover, South Carolina, dominated the 22nd edition of the ‘Rebel Yell’ tonight, July 24 at Screven Motor Speedway in Sylvania, Georgia! Ross, who stopped the clock third fastest in Group A during the Schaeffer’s Oil Southern Nationals Series qualifying session, picked up a heat race victory to earn the coveted pole position for the 53-lap headliner. He then outgunned fellow front row starter Steven Roberts at the drop of the green flag and was never seriously challenged throughout the distance in leading from flag-to-flag to bag the $10,053 top prize. Also a winner of the storied race back in 2019, Ross recorded his second career ‘Rebel Yell’ title tonight at the Peach State motorsports complex.

Steven Roberts, of Jesup, Georgia, was fast all evening and claimed a heat race triumph before knocking down the strong runner-up performance in the ‘Rebel Yell’ – 1.524 seconds behind Bailes’ #79 machine. Wil Herrington blasted from his seventh starting spot to land on the podium in third. Kenny Collins nabbed his second straight top five feature finish with the series, as he crossed underneath the checkers in the fourth position. Leading Dirt Draft Rookie of the Year contender and new Schaeffer’s Oil Southern Nationals Series point leader Cody Overton moved past four competitors during the 53-lapper to wind up fifth in the final finishing order.

“The whole time out there I thought I was feeling the right-rear (tire) go down,” quoted Bailes following the race, which saw the top twelve finish on the lead lap. “I was just worried the whole time. I was paranoid really. It was unheard of how many flat tires we had on this deal last year. It started off the exact same way at Beckley (in the miniseries opener) and I was like, ‘You have got to be kidding me!’ But it worked out for us tonight. I hope we’ve broken the curse.”

Round seven of the Schaeffer’s Oil Southern Nationals Series drew a 30 car field for the annual running of the ‘Rebel Yell’ at the James “Redd” Griffin-owned facility. Brent Dixon, of Elberton, Georgia, earned Fast Time honors during FK Rod Ends qualifying by laying down a fast lap of 14.567 seconds around Screven Motor Speedway. Heat race wins went to Ross Bailes, Cla Knight, Steven Roberts, and Kenny Collins, while Mark Whitener emerged victorious in the lone B-Main. Garrett Smith, who made hard contact with the wall in his heat race, and Benjamin Cranford were awarded series provisionals to gain access into the ‘Rebel Yell,’ while Ahnna Parkhurst and Chuck Southard opted to use an emergency provisional to make up the final row of the feature starting grid.

The action will shift to northern Georgia on Sunday, July 25, as the Schaeffer’s Oil Southern Nationals Series rolls into Rome Speedway in Rome, Georgia. Round eight of the miniseries will shell out a $4,053 payday tomorrow evening at the oval touted as the “World’s Fastest 1/2-Mile Clay Track.” Past Southern Nationals winners at Rome include: Chris Madden (’10), Jonathan Davenport (’11), Clint Smith (’12), William Thomas (’13), Randy Weaver (’14), Dale McDowell (’16), and Austin Horton (’18 & ’19). More information can be found online by logging onto www.dixiespeedway.com.