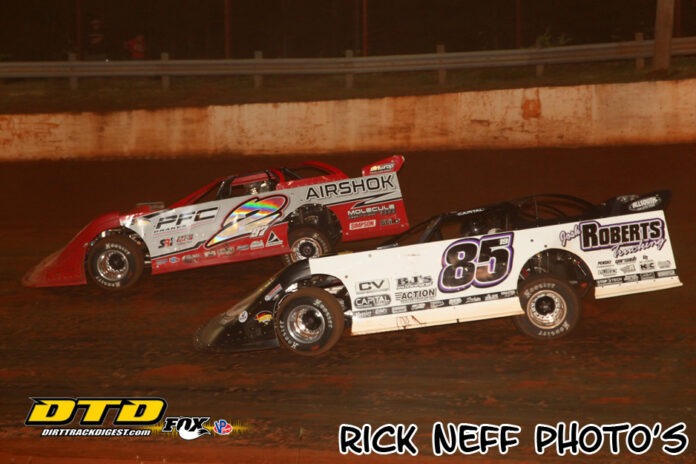 ROME, GA – Randy Weaver made his first appearance of the year with the Schaeffer’s Oil Southern Nationals Series on Sunday night, July 25 and dominated the program at Rome Speedway in Rome, Georgia to secure a $4,053 windfall! The Crossville, Tennessee native laid down the fastest lap overall during hot laps, clicked off the quickest time in Group A during FK Rod Ends qualifying, and later led all forty circuits in the headliner at the “World’s Fastest 1/2-Mile Clay Track.” Randy beat fellow front row starter Dale McDowell to turn one on the opening lap and proceeded to drive away from the feature field in winning by a whopping 5.111 second margin in a race slowed by only one early caution flag.

Donald McIntosh unloaded a back-up #4T machine at Rome and found speed right away in the car usually driven by his Blount Motorsports teammate Tommy Kerr. The Dawsonville, Georgia ace started third on the grid in the main event and moved up to second to finish an impressive runner-up, which vaulted him into the Schaeffer’s Oil Southern Nationals Series point lead. West Georgia Speedway winner Austin Horton, of Newnan, Georgia, advanced two spots to round out the podium in third. Dale McDowell, who earned Fast Time honors overall during qualifying, slipped back to fourth, while Dalton Cook crossed underneath the checkered flag in the fifth finishing position at the storied northwest Georgia oval.

“Man this thing was really, really good tonight,” exclaimed Weaver following the race in talking about his Capital racecar. “I always enjoy coming to Rome and racing against these guys. It’s been awhile since I’ve won here though, but this may have been the best car I’ve ever had at this place. I can’t thank my whole team enough – we are having fun and that’s what it’s all about.”

Round eight of the Schaeffer’s Oil Southern Nationals Series drew a 19 car field to the historic Rome Speedway for the Sunday special. The feature grid was entirely set by the qualifying session and each entrant advanced into the A-Main. With Randy Weaver (Group A) and Dale McDowell (Group B) topping their respective flights in time trials, those two experienced drivers brought the field to green in the 40-lapper.

After four straight days in the Peach State, the cars and stars racing with the Schaeffer’s Oil Southern Nationals Series will enjoy Monday away from the racetrack. They will reconvene on Tuesday, July 27 at Tri-County Race Track in Brasstown, North Carolina. Round nine of the miniseries will take place at Ray Cook’s 1/4-mile bullring and a lucky driver will walk away from the “Tiger Pit” with a $4,053 payday. Previous series winners at Tri-County include: Benji Cole (’05), Casey Roberts (’06), Chris Madden (’07), Casey Roberts (’15), Shanon Buckingham (’16), Brandon Overton (’17), Jake Knowles (’19), and Chris Madden (’20). More information on this show can be found online by clicking on www.TriCountyRaceTrack.net.