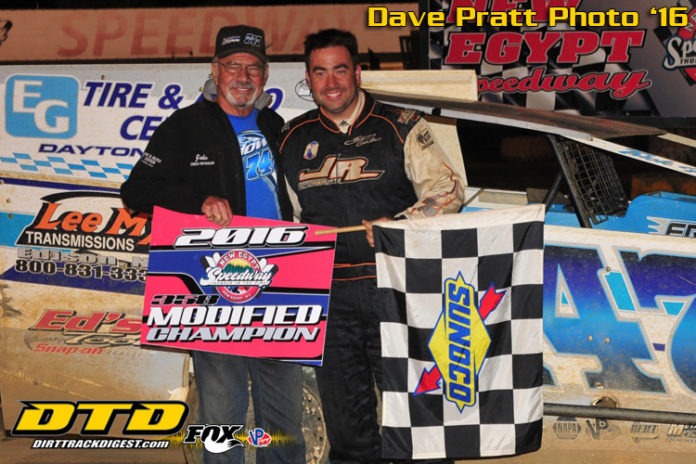 Ringoes, NJ’s Ryan Godown secured his fourth overall track championship worth $10,000 by a single marker over Billy Pauch Jr. on the final night of the season to clinch the title, if either competitor finished one position higher or lower the outcome would have changed.

“We just never gave up”, said Godown. “We really didn’t have that great of a season, but we made sure we we’re finishing every race and for that this year it was really more the crew then me because they gave me a car that never failed.”

For Godown it was his fourth title in five years at the Ocean County D-Shaped oval and for that he took the time to thank long time supporter John Chemedlin.

“I really appreciate the honor to be able to drive that No. 747 car, without John not one or four championships would have been possible,” spoke Godown.

Bobby Butler picked up the first ever North East Wingless Sprint Car title at New Egypt Speedway by winning the final feature of the season. Butler also stole the show as he proposed to his long time girlfriend Brianne during his championship speech. She would say, yes.

Bob Lineman Jr. was your 2016 Sportsman Track Champion. For Lineman it was his second career track title in which his previous crown was won in 2013. Brandon Grosso, JT Trstensky, Cale Ross and Ryan Simmons finished out the Top-5 in Sportsman standings.

Brandon Grosso scored the 2016 Crate Modified Track Championship by coming from behind and defeating season-long points leader Billy Osmun III on the final points night after Osmun was involved in an incident. Grosso announced his plans to compete in the 358 Modified division at New Egypt Speedway in 2017 while running in select ARCA races as well. Billy Osmun III, Tom Tanner, Ryan Simmons and John Aumick filed out the Top-5 in Crate Modified points.

Mick Search who has been a competitor at New Egypt Speedway since 1998 finally scored his first career track championship. Search in his speech mentioned how close he came to winning that elusive first title in 2008 but came up short ending up second overall. Jon Meyer, Joe Reid, Dan Salmons and Kim Cooke were your Top-5 Street Stock point scorers.

New Egypt Speedway kicks off its 20th Anniversary as a dirt track on March 18th with the 6th Annual March Meltdown featuring Big vs. Small Block Modifieds for 50-Laps paying $5,000 to win and $400 to start along with Crate vs. Open Sportsman. New Egypt Speedway will also be in attendance at the Motorsports Expo in Oaks, PA next weekend with pit parking forms, license forms and season passes on sale in addition to the 2017 Schedule.

New Egypt Speedway is located on Route 539 in New Egypt, NJ just minutes from Six Flags Great Adventure and the New Jersey Turnpike. A racy 7/16-mile D-shaped dirt oval, New Egypt Speedway serves Garden State race fans with some of the best competition in the country. New Egypt’s state-of-the-art facilities feature daylight-quality lighting and excellent sightlines from any seat in the house. The grandstands are fully wheelchair accessible with wide, clear, and well-groomed walkways. Concession facilities serve up everything from Jersey Burgers to ice cream treats at family-friendly prices.
For more information on New Egypt Speedway, visit online: www.newegyptspeedway.net, “Like” us on Facebook at www.facebook.com/newegyptspeedwayofficial, or follow us on Twitter @nesspeedway. 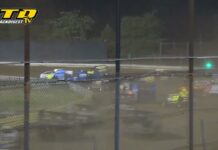