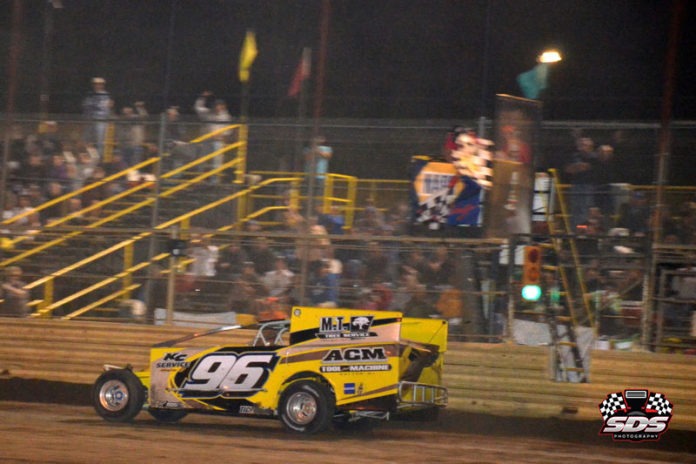 When the 30-lap 358 Modified feature got underway, Andrew Bohn sped to the front with David Van Horn, Chad Barney, Billy Pauch, Jr. and Kevin Vaclavicek in pursuit. Following an opening lap caution period and restart, Pauch Jr. drove into the runner-up position and began to track down Bohn. On the fourth circuit, Pauch, Jr. slipped by Bohn to gain the lead. With a clear track, Pauch began to pull away until the yellow flag appeared on lap seven for Chris Grbac. On the ensuing restart, Van Horn worked his way by Bohn just before a multi-car incident took place in the fourth corner. When action resumed again, Pauch, Jr. and Van Horn remained in the top two positions with Ryan Godown taking third from Bohn. The final caution period of the contest took place on the eleventh tour as Danny Bouc’s car veered into the outside wall in the first turn. When the green flag waved, Pauch, Jr. fended off Van Horn with Godown, Barney and John McClelland next in tow. At the halfway point, Pauch, Jr. was stretching out his advantage as Van Horn and Godown were dicing for second place and a battle for fourth was brewing between Barney and McClelland. On lap twenty, Pauch, Jr. began to encounter lap traffic. With five circuits remaining and in heavier traffic, Pauch, Jr. was still in top with Van Horn nudging closer. As the two to go signal was given, the third place running Godown began a final surge towards the top and closed in on Van Horn. When the checkered flag waved, Pauch, Jr. was in front to collect the opening night win with Van Horn holding off Godown for second. The Barney and McClelland duel went down to the wire with Barney taking fourth place. Lou Cicconi and Ryan Godown won the 358 Modified qualifying races.

In the 20-lap Northeast Wingless Sprint Car main event, Ryan Godown took the lead from Wayne Weaver on the fourth tour and led the remainder of the event. Weaver, who led the opening three circuits, finished in second place. Lee Nardelli came home in third. Lou Cicconi and Bobby Butler rounded out the top five. The Northeast Wingless Sprint Car heats were taken by Lee Nardelli and Ryan Godown.

Taking advantage of his pole starting position, Billy Osmun, III led every step of the way to win the 20-lap Hammer Sportsman feature. The victory was Osmun’s first ever in the division. The runner-up position was taken by Will Dupree. Bob Lineman, Jr. finished in third. Fourth went to Pat Wall with 2016 Rookie Champion Cale Ross coming home in fifth. Pat Wall, JR Fulper, and JT Trstensky were the Hammer Sportsman heat race winners. The consolation contest was won by Jimmy Amato.

After taking the lead from Walt McIntyre at the halfway point, David Burns drove away from the field to take the checkered flag in the 8-lap Lyons Construction/Metal Fab Rookie feature. McIntyre came home in second. Rob Mancini, Joseph Brown and Richard Wegner, Sr. completed the field.


On Saturday, April 22 at New Egypt Speedway, the 358 Modifieds, Crate Modifieds, Street Stocks & Lyons Construction/Metal Fab Rookie Sportsman will be in action. Pit gates unlock at 3:00 p.m. with spectator turnstiles opening at 4:00 p.m. Hot laps get underway at 5:00 p.m. and the racing starts at 6:00 p.m. Admission to the grandstand is $20 for adults, $18 for seniors 65 and older, $10 for teens 12-15, $10 for military personal and their spouses with ID, and Kids 11 & under are FREE. Pit admission is $30 with a New Egypt Speedway license and $40 with no license.