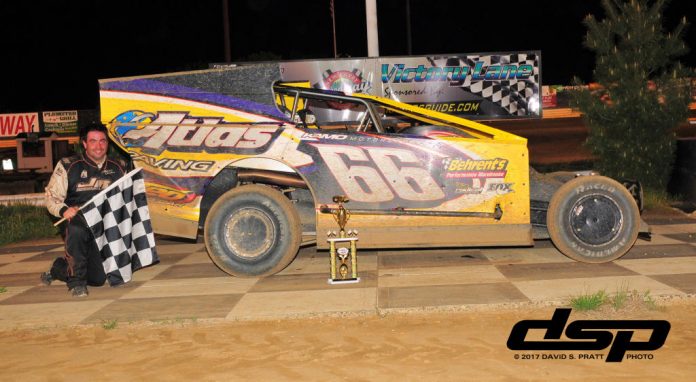 At the start of the first 20-lap feature for the 358 Modifieds, fourth place starting Danny Bouc bolted to the front of the pack. After a couple of caution periods and five circuits completed, Bouc was still on top with Ryan Godown in second place after starting in fifteenth. Godown was tracking down Bouc when a series of yellow flags took place on the eighth circuit. Once green flag racing resumed, Godown took the lead with nine tours recorded. Godown continued to his stretch his advantage over Bouc until he began to enter lap traffic with three laps remaining. In the midst of slower cars, Bouc began to close in on the leader but Godown maintained his position to take the win. With Bouc finishing in second, Ryan Krachun came home in third. Fourth went to DJ Ruppert. After starting in twenty-third, Rocco Infante finished in fifth.

With the top twelve finishers of the first feature inverted for the second 20-lap feature for the 358 Modifieds, polesitter Billy Pauch, Jr. grabbed the opening lap lead after the original start was scrubbed due to a caution. Just after the first tour was completed, the red flag was shone as a multi-car incident in turn one saw Roger Manning’s car rollover. After a few appearances of the yellow flag, Pauch, Jr. was still in command on lap six with Godown in second place and David Van Horn in third. At the halfway point, a mechanical issue forced Van Horn to drop out of the race on another restart and John McClelland was next in line behind Pauch, Jr. and Godown. In the second half of the race, Pauch, Jr. began to pull away from Godown but one final caution period occurred on lap nineteen. On the final resumption of racing, Pauch, Jr. held off one last charge by Godown to take his second win of the year. With McClelland breaking on the closing circuit, Willie Osmun finished in third. Fourth was taken by Ryan Krachun and Brandon Grosso completed the race in fifth. The 358 Modified heat winners were Lou Cicconi, Danny Bouc, and PJ Oliver. The consolation race was taken by Chad Barney.

After taking the lead from Shaun Ratchford on the third circuit, TJ Lilly survived several restarts to score his second career win in the 20-lap Hammer Sportsman feature. Billy Osmun, III, who won two weeks ago, finished in second place. Third place was taken by Pat Wall. Cale Ross and Mike Lyons completed the top five. The victors in the Hammer Sportsman heat races were TJ Lilly and Mike Lyons.

On Saturday, May 6, the 2017 version of the May Modified Madness for the 358 Modifieds gets underway with the Round of 24. The Crate Modifieds, Street Stocks, Lyons Construction/Metal Fab Rookie Sportsman and the Garden State Vintage Stock Car Club will be on the docket as well. Pit gates unlock at 3:00 p.m. with the grandstand ticket window opening at 4:00 p.m. Hot laps begin at 5:00 p.m. and racing starts at 6:00 p.m. Admission to the grandstand is $20 for adults, $18 for seniors 65 and older, $10 for teens 12-15, $10 for military personal and their spouses with ID, and kids 11 & under are FREE. Pit admission is $30 with a New Egypt Speedway license and $40 with no license.