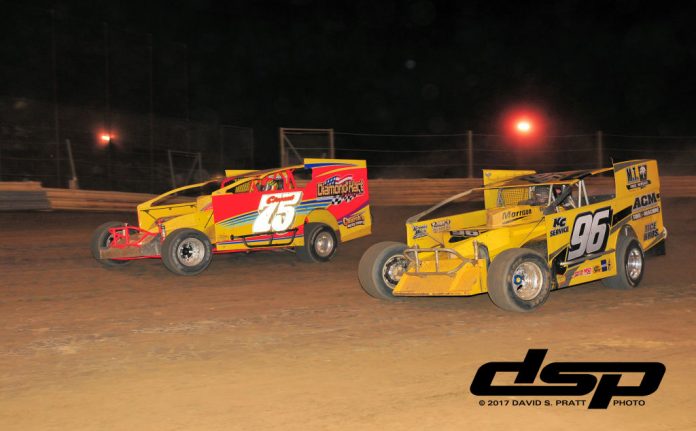 As the 30-lap May Modified Madness Round of 24 feature got underway for the 358 Modifieds, Steve Davis grabbed the point with Lou Cicconi in his tracks. PJ Oliver motored into third on the second tour and began to pursue Cicconi for second. As the battle for the runner-up spot was developing, the yellow flag waved on the fourth tour for a slowing Ryan Godown. When action resumed, Cicconi blasted by Davis for the lead. By the tenth tour after some great racing action and a few additional caution periods, Cicconi and Davis remained in the top two spots with Billy Pauch, Jr., Oliver and Danny Bouc next in line. Davis and Pauch, Jr. were in a spirited duel for second when Davis was forced to retire on the twelfth revolution with a mechanical failure.

At the halfway point, Cicconi and Pauch, Jr. began a multi-lap side by side clash for the lead with Oliver in striking distance. With Cicconi in the high groove, Pauch, Jr. used an inside move and slid into the front running position with ten laps remaining. With Pauch, Jr. extending his advantage, Bouc rode into third on the twenty third lap and passed Cicconi for second one tour later. With five laps remaining and Pauch, Jr. nearly a straightaway ahead of the pack, the yellow lights illuminated one last time for Doug Ostwald. On the single file restart, Pauch, Jr. held off Bouc and paced the field for the final laps to capture his third win of the year. With the victory, Pauch, Jr. has qualified for the May Modified Madness Finale. Bouc completed the race in second. Oliver rushed past Cicconi on the twenty-ninth lap to finish in third. With Cicconi coming home in fourth, David Van Horn wound up in fifth. The 358 Modified heat winners were Steve Davis, PJ Oliver, and Danny Bouc.

After taking the lead from the early pacesetter Ryan Simmons, ninth place starting Connor King went unchallenged to win the 20-lap Crate Modified main event. The victory was the second of King’s career. Jeremy Martino drove by Simmons in the latter stages of the affair to finish in second place. Simmons, who led the opening eleven laps, finished in third. Tom Tanner and Steve Hicks completed the top five. Connor King, Steve Hicks, and Ryan Simmons won the Crate Modified qualifying races. The consolation contest was taken by Steve Kemery.


In the first 8-lap feature for the Lyons Construction/Metal Fab Rookie Sportsman, Joseph Brown was awarded the win after disqualifications of the top two finishers, Rick Wegner Sr. and David Burns. Completing the top three were Walt McIntyre and Rob Mancini.

In the second 8-lap feature for the Lyons Construction/Metal Fab Sportsman, David Burns took the lead at the halfway point from Rob Mancini and led the field for the remaining distance to take his third checkered flag of the year. Walt McIntyre was second. Joseph Brown crossed the finish line in third and Mancini came home in fourth.

The ‘Greatest Show on Dirt’, the World of Outlaw Craftsman Sprint Car Series, is set to invade New Egypt Speedway onTuesday, May 23 for the 5th Annual Jersey Outlaw Classic. A star studded lineup of Daryn Pittman, Donny Schatz, David Gravel, Brad Sweet, Jason Johnson, Shane Stewart, Joey Saldana, Sheldon Haudenschild, Paul McMahan and more will be in action. Tickets are available now by visiting www.worldofoutlaws.com/tickets. Pit Gates unlock at 2:00 p.m. The ticket and will call windows will open at 3:30 p.m. Spectator gates open at 4:00 p.m. Hot Laps get underway at 6:30 p.m. with racing beginning at 7:30 p.m. A rain date of Wednesday, May 24 has been added in case there is inclement weather. General Admission tickets are $30, reserved tickets are $35, Teens 12-15 are $15, and Children 11 and under are free. Pit admission is $40.

Racing continues on Saturday, May 27 with the 358 Modifieds competing in the Remember Our Veterans 40. This extra distance event will also serve as the Round of 12 in the May Modified Madness Series. The Hammer Sportsman, Northeast Wingless Sprint Cars and Lyons Construction/Metal Fab Rookie Sportsman will be in action as well. The pits open at 3:00 p.m. with the spectator gates unlocking at 4:00 p.m. Hot laps crank up at 5:00 p.m. and the first green flag flies at 6:00 p.m. On this special night, military personnel will be admitted at no charge with proper identification. Adult admission is $22, Seniors 65 & up are $20, Teens 12-15 are $12 and Children 11 and under are FREE. Pit admission is $30 with a New Egypt Speedway license and $40 with no license. 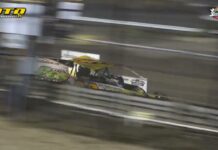