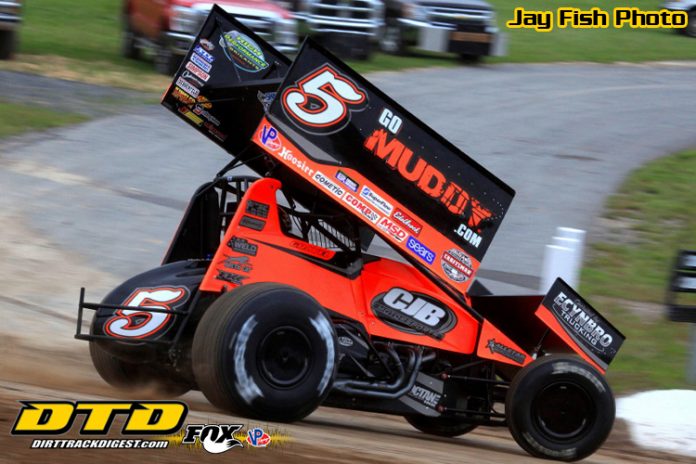 NEW EGYPT, NJ – David Gravel continued his east coast dominance Wednesday night at New Egypt Speedway by picking up his third win of the last four World of Outlaws Craftsman® Sprint Car Series races and his eighth-overall win for the 2017 season. Gravel, no stranger to the D-shaped clay oval, cut his teeth in Sprint Car racing at New Egypt in his URC Sprint Car.

“I’m glad I could win in front of everybody here that came out to watch me,” Gravel said. “I have to thank Barry, Derek and Zack for working hard to give me a good car; I just have to do my part.”

Jason Johnson and Gravel lead the 24-car field to the green flag to start the 30-lap Feature. Gravel dove into turn one and came out of turn two as the new leader on the initial start and never looked back.

The first caution of the night was brought out on lap six for a slow Tyler Ross.


Donny Schatz and Brad Sweet put pressure on Johnson for second on the restart as they went three-wide going into turn one. Sweet came out on top as he pulled away in second.

After spending time in the work area, Sides, Pittman and Sammons were able to rejoin the back of the field. Blaney suffered too much damage to return.

After the field got going again, Gravel was able to get back out front and hold a steady lead over Sweet until they caught lap traffic on lap 14.

Gravel maneuvered his way through the lap cars smoothly until Sweet and Schatz started the second and third-place cars a glimmer of hope.

With four laps remaining. Schatz dove under Sweet going into turn one and took away the second spot by the time he exited for the back stretch.

Schatz then set his sights on Gravel but only to have a lap car act has a pick as they exited out of the final turn.

“I’m sure he was close,” mentioned Gravel about Schatz. “I really couldn’t do anything. It was a pretty narrow track but I just tried not to slip up. I don’t know if he was running high or low. I was trying to be patient in lap traffic.”

Gravel crossed the line and took the victory over Schatz, Sweet, Shane Stewart and Jason Johnson. Gravel is red-hot on the east coast having won three races in the last week.

“It’s been a great year and hopefully we keep doing this,” Gravel noted.

“We got there in traffic but that’s what it was going to take to win the race,” Schatz said. “The lap cars were pretty tough to get around. He was better than we were in the open. You’re not going to win these races anymore if you’re not a very good car and we just haven’t seem to get that right rear feel. We’ll keep working on it.”

Third-place finisher, Sweet, was happy with his performance in his No. 49 machine despite rough track conditions.

“There were some holes out there and lap traffic and that’s what easily wins or loses it,” Sweet added. “We were right there on David and tried to move up a little bit but there wasn’t much up there. David did a good job and just kind of managed the race and kept his car out front in the right position.”

Shark Racing ran into hauler troubles heading to New Egypt forcing them to arrive late. Logan Schuchart tagged on to the back of the heat race while Jacobs Allen’s car arrived later and made it just in time for the Last Chance Showdown. Schuchart transferred to the feature through the Last Chance Showdown from last place and finished in a solid 12th-place finish, grabbing the KSE Hard Charger Award in the process.

Pittman, who had won the last four races at New Egypt, was set to start ninth in the third heat and immediately went pit side to change an engine after trailing oil on the track. Pittman qualified second in the Last Chance Showdown to transfer into the Feature. He was then tangled up in an early wreck, damaging the wing and breaking the front axle. Pittman made it back out and finished 14th.

Donny Schatz kicked off the night with the fastest time in time trials with a time of 13.422. Heat races went to Stewart, Shaffer and Gravel. Johnson won the Craftsman Club Dash and Jason Sides won the last chance showdown.

The World of Outlaws Craftsman Sprint Car Series returns to action on Friday, May 26 at The Dirt Track at Charlotte for the Outlaw Showdown. Last year saw Greg Wilson find his way to the big stage under the lights over Shane Stewart and Cole Duncan.