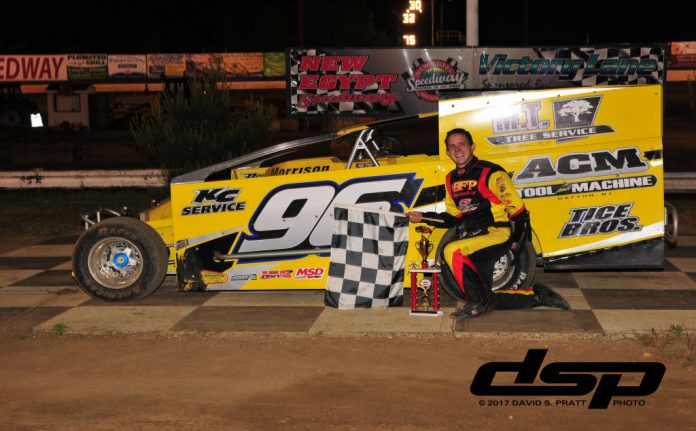 As the 30-lap 358 Modified feature got underway, Bryan Kuhl jumped to the front with Chris Grbac and Andrew Bohn next in line. By lap six, Kuhl had developed a comfortable lead over his rivals with Grbac and Bohn dueling for the runner-up spot. After ten tours, Kuhl’s advantage was a full straightaway with Grbac, Bohn, Steve Davis and John McClelland racing in the top five. On lap 13, Davis drove by Bohn to gain third and began to battle Grbac for second. Just as Kuhl was catching the rear of the field, the seventeenth place starting Billy Pauch, Jr. continued his ascent towards the front by moving into fourth place on the seventeenth circuit. By lap twenty, Kuhl was maintaining his lead by maneuvering through lap traffic with Davis in second and Pauch, Jr. in third. Two revolutions later, Pauch, Jr. worked his way by Davis with Ryan Godown in fourth. The first caution of the race took place on the twenty-third lap for Ryan Krachun. On the restart, Pauch, Jr. outgunned Kuhl to take command of the pack. The second yellow flag waved one lap later again for Krachun. When the green flag was shone, Pauch, Jr. kept his lead with Godown motoring into second and Kuhl slipping back to third. Pauch, Jr. survived one additional restart with two circuits remaining to secure his fourth win of the year. Godown, who started the race in thirteenth, was the runner-up. Kuhl’s strong performance resulted in a third place finish. Fourth place went to Steve Davis with veteran Willie Osmun taking fifth. The 358 Modified heat winners were Andrew Bohn, Rocco Infante, and Steve Davis.

In the Crate Modified feature, Jason Dunn took the lead on the second tour from Jordan Cox and paced the field for the remaining circuits to win the 16-lap event. The race, originally scheduled for 20-laps, was shortened when the thirty minute time limit was met. The win was Dunn’s first in the Crate Modified division after two previous victories in the Sportsman class. Dan Fleming was second. Eighteenth place starting Ryan Simmons finished in third. Cox was fourth and fifth was taken by John Criscione. Jason Dunn, Jordan Cox, and John Criscione won the Crate Modified qualifying races. Kyle Kania was the victor in the consolation contest.

John Meyer led from start to finish to grab his second career feature win in the 15-lap Street Stock feature. Ron Frees came home in second. A good battle for third place was earned on the last lap by Mick Search. Bill Liedtka, the heat race winner, was fourth and Billy Wroble completed the event in fifth.

Rick Wegner, Sr. was awarded the victory in the second 8-lap Lyons Construction/Metal Fab Rookie Sportsman feature after the car of the apparent winner, David Burns, did not meet the minimum post-race weight. Walt McIntyre, Joseph Brown and Rob Mancini rounded out the top four.

On Saturday, June 10, the May Modified Madness Finale takes place for the 358 Modifieds. Four drivers, Danny Bouc, Steve Davis, Ryan Godown and Billy Pauch, Jr., will battle it out for the May Modified Madness title with the top finishing driver in the feature taking home the 2017 title.  The Hammer Sportsman, Northeast Wingless Sprint Cars, Lyons Construction/Metal Fab Rookie Sportsman and the Garden State Vintage Stock Car Club will be in action as well. The pit and spectator gates will open at 4:00 p.m. Hot laps crank up at 6:00 p.m. and the first green flag flies at 7:00 p.m.Admission to the grandstand is $20 for adults, $18 for seniors 65 and older, $10 for teens 12-15, $10 for military personal and their spouses with ID, and kids 11 & under are FREE. Pit admission is $30 with a New Egypt Speedway license and $40 with no license.