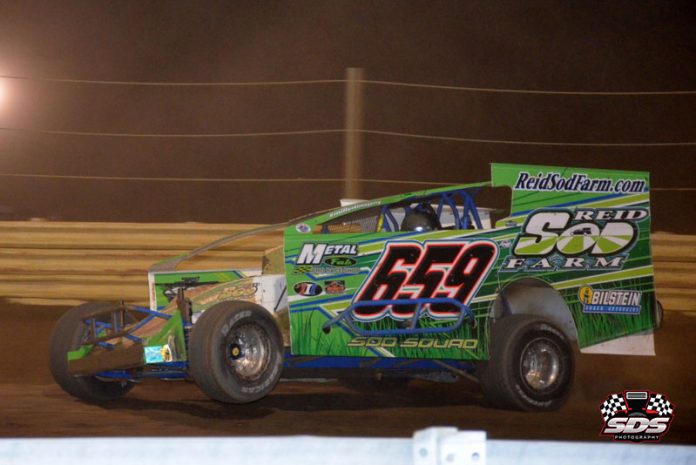 As the 30-lap 358 Modified feature got underway, Andrew Bohn bolted to the front with Chris Grbac and Chad Barney next in line. In the opening circuits, Grbac and Barney engaged in an entertaining duel for the runner-up spot. After a few cautions and one red flag incident, Bohn was still in control on the twelfth tour with Barney, PJ Oliver, Ryan Krachun and Grbac in tow. At the halfway point, Oliver swept past Barney and began to close in on Bohn. On the nineteenth lap, Krachun motored by Barney to advance into third. On lap twenty just as fifteenth place starting Danny Bouc had moved into fifth, Krachun’s strong run ended as his car stopped in turn four. On the final restart of the event, Bohn rejected the advances of Oliver to maintain his lead with Bouc driving into third past Barney and Godown leaping into fifth. With eight circuits remaining, Godown slipped by Barney to take fourth place. On lap twenty-seven, the top three of Bohn, Oliver and Bouc were in tight quarters. Over the final tours, Bohn retained his front running position to capture the win. Oliver was next to cross the finish line. Third place went to Bouc with Godown coming home in fourth. Billy Pauch, Jr. completed the race in fifth. By out finishing Steve Davis, Godown, and Pauch, Jr., Bouc took the 2017 May Modified Madness title. The 358 Modified heats were taken by John McClelland, Bryan Kuhl and Andrew Bohn.

In the second 8-lap feature for the Lyons Construction/Metal Fab Rookie Sportsman, David Burns took the lead on the second circuit and set the pace for the remainder of the contest to capture his sixth win of the year. The runner-up spot was claimed by Walt McIntyre. Joseph Brown, Rob Mancini and Rick Wegner, Sr. rounded out the field.

On Saturday, June 17, Graduation Night takes place at New Egypt Speedway as commencement ceremonies will take place for the Lyons Construction/Metal Fab Rookie Sportsman drivers along with their final point event. In addition, the racing docket will include the 358 Modifieds, Crate Modifieds and Street Stocks. All 2017 graduates will be admitted for free with a copy of their diploma. The grandstand and pit gates open at 4:00 p.m. Warm-ups get underway at 6:00 p.m.and racing starts at 7:00 p.m. Admission to the grandstand is $20 for adults, $18 for seniors 65 and older, $10 for teens 12-15, $10 for military personal and their spouses with ID, and kids 11 & under are FREE. Pit admission is $30 with a New Egypt Speedway license and $40 with no license.