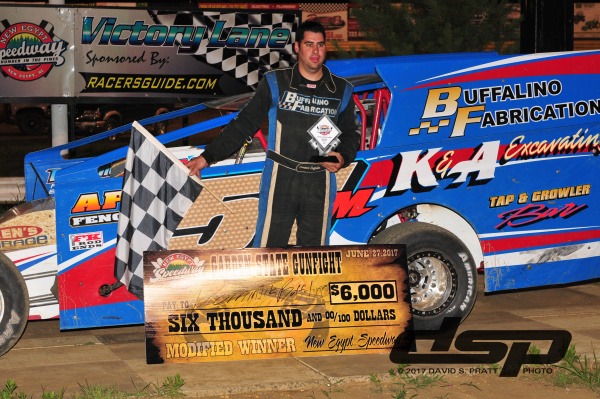 As the Modified feature got underway, Wade Hendrickson grabbed the lead with Steve Davis and Ryan Godown next in line. Godown would advance into the runner-up spot with six circuits completed. With ten laps recorded, Godown was cutting into Hendrickson’s margin with Davis in third and Anthony Perrego in fourth.

Godown pulled even with Hendrickson on the twelfth lap and took over the lead one tour later. As the green flag circuits clicked away, Godown began to approach the tail end of the field on the eighteenth lap with Perrego in second.

With the top two runners in the midst of lapping cars, Billy Pauch, Jr. and Dominick Buffalino were making moves to gain third and fourth place respectively by the twenty-first revolution.

As Perrego was closing in on Godown, the first caution of the event took place as Rick Laubach collided hard with the outside wall in turn one and collected Brett Kressley in the incident.

On the ensuing restart, Godown maintained his edge with Buffalino jumping into second, Pauch, Jr. staying in third and Perrego dropping back into fourth. The high line running Buffalino began to challenge Godown for the top spot when PJ Oliver’s ride slowed on lap twenty-eight.

When green flag racing resumed, Godown and Buffalino dueled for two tours with Buffalino switching to the inside lane to take command of the contest just before the caution flag waved for the mid-race fuel stop.

At the halfway point, the top five runners were Buffalino, Godown, Perrego, Pauch, Jr. and Davis. After the brief break, action returned with Buffalino still on top but Pauch, Jr. taking over second. Pauch, Jr., who started the event in fourteenth, catapulted to the front on the thirty-third lap following a caution period for Ryan Krachun.

Once on top, Pauch, Jr. began to distance himself from his foes with Buffalino and Godown dicing for second with twenty laps remaining in the contest. Five tours later, Buffalino was slowly carving into the comfortable margin that Pauch, Jr. had established.

By the forty-sixth lap, the top two began to enter lap traffic. Over the next several revolutions, Buffalino began to slice into the leader’s advantage. With only four tours left, Buffalino had reeled in Pauch, Jr. and was ready to contend for the lead.

In the 25-lap Sportsman event, Matt Stangle gained the lead on the sixteenth lap and remained on top to collect the victory. Steve Davis led the opening fifteen tours before Stangle assumed the advantage following a restart.

Second place was taken by Mike Lyons. Involved in a caution on the eighth circuit, JR Fulper came from the back of the pack to finish in third place.

On Saturday, July 1 at New Egypt Speedway, the Firecracker 40, presented by
48 Barriers.com, will see the 358 Modifieds competing in a 40-lap feature.

The Northeast Wingless Sprint Cars, Hammer Sportsman and an amazing fireworks display will be on the docket as well. The grandstand and pit gates open at 4:00 p.m. Warm-ups get underway at 6:00 p.m. and racing starts at 7:00 p.m. Admission to the grandstand is $25, $23 for seniors 65 & older, $15 for teens 12-15, $15 for military personal and their spouses with ID, and kids 11 & under are FREE. Pit admission is $30 with a New Egypt Speedway license and $40 with no license.

New Egypt Speedway is located on Route 539 just minutes from Six Flags Great
Adventure and the New Jersey Turnpike. A racy 7/16-mile D-shaped dirt
oval, New Egypt Speedway serves Garden State race fans with some of the best competition in the country. New Egypt’s state-of-the-art facilities feature daylight-quality lighting and excellent sightlines from any seat in the house. The grandstands are fully wheelchair accessible with wide, clear, and well-groomed walkways. Concession facilities serve up everything from Jersey Burgers to ice cream treats at family-friendly prices.