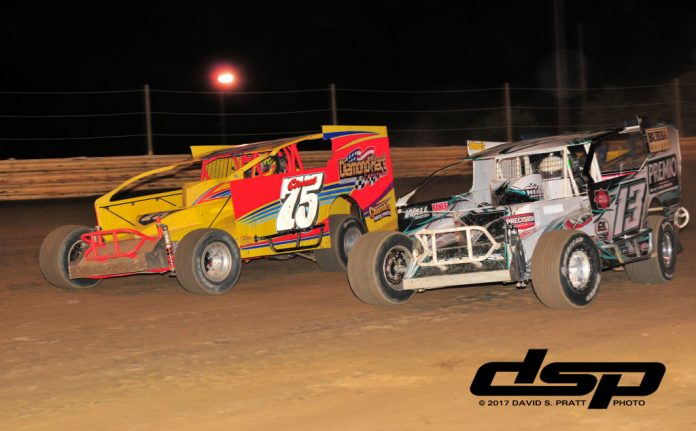 NEW EGYPT, NJ – At New Egypt Speedway, Lou Cicconi won the
358 Modified feature and became the fifth different winner over the past
five races. The Mr. Street Stock Classic went to Bill Liedtka. Connor King
was the victor in the Crate Modified feature.

As the 30-lap 358 Modified feature began, Rocco Infante drove to the front
with Lou Cicconi and Ryan Krachun in his tracks. With five revolutions
completed, the top three cars of Infante, Cicconi and Krachun were pulling
away from the field with John Pakenham in fourth and Steve Davis in fifth.
By lap ten, a great multi-car battle for fifth place was underway as Davis
was holding off Godown with Doug Ostwald and Kevin Vaclavicek in the mix. On
the eleventh circuit just as Godown wrestled fifth away from Davis,
Vaclavicek hit the outside wall in turn one and rolled over causing the red
flag to be waved. During the stoppage, a brief delay took place due to a
light rain shower. Once the rain ceased and action resumed, Cicconi
outgunned Infante to take command with Godown advancing into third and
Krachun dropping into fourth. Over the next few laps, tight racing action
between Krachun, Godown and Infante caused the runner-up position to be
exchanged a few times. At the halfway point with Cicconi and Krachun holding
the top two positions, the last stoppage of the event occurred as a flat
developed on Danny Bouc’s ride. On the restart, Cicconi maintained his edge
with Krachun, Infante, Godown and Billy Pauch, Jr. next in line. With ten
laps remaining, Cicconi was pulling away slightly from Krachun with Infante
and Godown continuing to battle.  Five circuits later, Krachun had cut into
Cicconi’s advantage and began to approach the leader’s bumper. On lap
twenty-seven with the top two runners in traffic, Krachun hopped the cushion
and lost ground to Cicconi. Quickly, Krachun regrouped and began to chase
down Cicconi. On the final tour, Cicconi had Krachun on his tail once again
but held on to win his first 358 Modified feature of the season. The victory
was Cicconi’s second career win in the division and his first since July
2015. Krachun’s strong run netted him a second place finish. Godown came
home in third. Pauch, Jr. finished in fourth and Infante was fifth. The 358
Modified heat winners were Rocco Infante and Lou Cicconi.


After taking the lead from Jon Meyer on the sixth circuit, Bill Liedtka
survived Mick Search’s late race challenge to win the 25-lap Mr. Street
Stock Classic. With Search in second, Jeramy Doerr completed the race in
third. Fourth was captured by Vern McLaughlin and Darren Cox finished in
fifth.

Connor King passed Tommy Tanner on the final circuit to take the victory in
the 20-lap Crate Modified feature. Johnny Bangs led the opening twelve tours
before John Criscione ascended to the top. Criscione lost the lead and
caused a caution period when he spun in front of the pack on lap fourteen.
On the ensuing restart, Tanner took the lead and appeared to be heading to
his first win at New Egypt Speedway. In turn three coming to the checkered
flag, King slipped beneath Tanner and sped to his second win of the season.
Tanner, Johnny Bangs, Steve Hicks and Eric Palmer completed the top five.
Johnny Bangs, Tom Princiotta, and Jason Dunn won the Crate Modified
qualifying races.

Hammer Companies Night is set for Saturday, July 15 at New Egypt Speedway.
The racing schedule includes the 358 Modifieds, the Hammer Sportsman and
Northeast Wingless Sprint Cars. All gates open at 4:00 p.m. Warm-ups start
at 6:00 p.m. and racing gets underway at 7:00 p.m. Admission to the
grandstand is $20 for adults, $18 for seniors 65 and older, $10 for teens
12-15, $10 for military personal and their spouses with ID, and Kids 11 &
under are FREE. Pit admission is $30 with a New Egypt Speedway license and
$40 with no license.


New Egypt Speedway is located on Route 539 just minutes from Six Flags Great
Adventure and the New Jersey Turnpike.   A racy 7/16-mile D-shaped dirt
oval, New Egypt Speedway serves Garden State race fans with some of the best
competition in the country.  New Egypt’s state-of-the-art facilities feature
daylight-quality lighting and excellent sightlines from any seat in the
house.  The grandstands are fully wheelchair accessible with wide, clear,
and well-groomed walkways. Concession facilities serve up everything from
Jersey Burgers to ice cream treats at family-friendly prices.