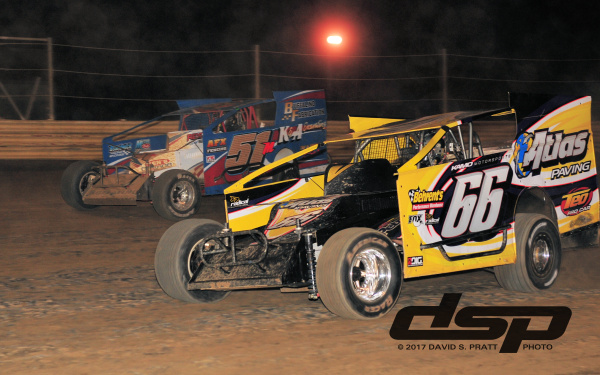 When the 30-lap 358 Modified feature got underway, Kevin Vaclavicek was the
leader with Rich Rutski, Rocco Infante, Steve Davis and John Pakenham next
in line. With five tours in the books and the caution flag waving for a
slowing PJ Oliver, the leader board showed Vaclavicek still on top with
Rutski in second and Ryan Krachun in third. When racing resumed, Vaclavicek
held on to first place with Krachun motoring into second. Krachun quickly
moved closer to Vaclavicek and gained the lead on the ninth circuit. Behind
the top two of Krachun and Vaclavicek, twelfth place starting Ryan Godown
was continuing his march towards the top and reached third on lap eleven. On
the twelfth circuit, the yellow lights illuminated for a slowing DJ Ruppert.
Krachun maintained his advantage on the restart with Vaclavicek and Godown
in his tracks. Godown surged to the runner-up position with fourteen tours
completed. At the halfway point, the cars of Bryan Kuhl and Lou Cicconi
locked bumpers and the caution flag was displayed. On the ensuing restart,
Krachun and Godown engaged in a spirited side-by-side duel for the lead with
Godown ascending to the front of the field. After two more caution periods
and nine laps remaining in the contest, Godown was still on top with Krachun
in second, nineteenth starting Danny Bouc in third and David Van Horn riding
in fourth. On lap twenty-five, Krachun was in close proximity of Godown when
the yellow lights illuminated for the final time for John McClelland. As the
green flag waved, Godown maintained his advantage with Krachun feeling the
pressure from Bouc for second place. With three laps to go, Bouc blasted by
Krachun to take over the runner-up spot. Quickly, Bouc began to chase down
Godown and was in striking distance as the white flag waved. On the final
circuit, Bouc blasted down the backstretch and dove to the inside of Godown
in the third corner to take the lead. Bouc’s momentum took him to the high
side in turn 4 and Godown shifted to the lower lane of the final corner.
Exiting the fourth turn, Godown drifted back to the upper groove as he
regained the lead. As the top two sped to the finish line, Godown held off
Bouc to become the sixth different winner over the past six 358 Modified
features at New Egypt Speedway. After finishing second last week, Krachun
came home in third. Van Horn was fourth and Vaclavicek’s strong run earned
him fifth place. Rich Rutski, Ryan Krachun and DJ Ruppert were victors in
the 358 Modified heat races.


After winning the heat race, Ryan Godown took the lead on the second circuit
and cruised to his six checkered flag in the 20-lap main event for the
Northeast Wingless Sprint Cars. Ninth place starting Billy Pauch, Jr. was
the runner-up. Third place was claimed by Lee Nardelli. Fourth place went to
Rich Mellor and Larry McVay came home in fifth.

In the 20-lap Hammer Sportsman feature, Cale Ross, the 2016 New Egypt
Speedway Rookie Champion, scored his first career win. Jimmy Amato led the
opening three tours before Ross took command for the rest of the event. Will
Dupree finished in second. Billy Osmun, III, the current point leader,
completed the race in third after starting the race in twelfth. Pat Wall was
fourth and fifth was captured by JR Fulper. Qualifying races for the Hammer
Sportsman went to Cale Ross and Will Dupree.

On Saturday, July 22, the Mr. Sportsman Classic takes place at New Egypt
Speedway on Fan Appreciation Night. A 30-lap feature for the Hammer
Sportsman will headline the racing card. The Crate Modifieds, Northeast
Wingless Sprint Cars and Street Stocks will be in competition as well. An
exhibition race featuring crew members from several race teams will close
out the night. Grandstand admission prices will be discounted and plenty of
giveaways are slated to be doled out on this special night honoring the fans
of New Egypt Speedway. All gates will open at 4:00 p.m. Warm-ups start at
6:00 p.m. and racing gets underway at 7:00 p.m. Admission to the grandstand
is $10 for adults, $8 for seniors 65 and older, $5 for teens 12-15, $5 for
military personal and their spouses with ID, and kids 11 and under are free!
Pit admission is $30 with a New Egypt Speedway license and $40 with no
license.


New Egypt Speedway is located on Route 539 just minutes from Six Flags Great
Adventure and the New Jersey Turnpike. A racy 7/16-mile D-shaped dirt
oval, New Egypt Speedway serves Garden State race fans with some of the best
competition in the country. New Egypt’s state-of-the-art facilities feature
daylight-quality lighting and excellent sightlines from any seat in the
house. The grandstands are fully wheelchair accessible with wide, clear,
and well-groomed walkways. Concession facilities serve up everything from
Jersey Burgers to ice cream treats at family-friendly prices. 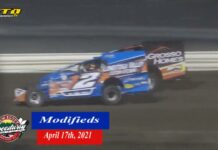